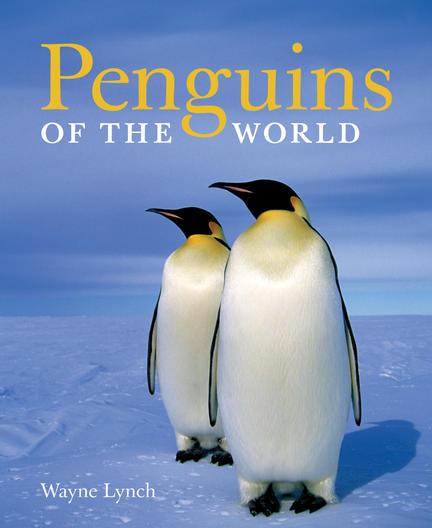 The internationally successful movie March of the Penguins showcases the life of these fascinating flightless birds that have become such prominent symbols of the fragile nature of our ecosystem. Faced with global warming, invasive tourism, pollution and loss of habitat, penguins -- if they are to survive -- need protection more than ever.

Over the past 18 years, Wayne Lynch has traveled to Antarctica, the Galapagos Islands, Argentina, Chile, New Zealand and a dozen remote island clusters in the tempestuous Southern Ocean, studying and photographing all 17 species of penguins in their natural habitats. In Penguins of the World, he documents the extraordinary life cycles of these tough, resourceful and beautiful animals in the harshest environments imaginable.

This second edition has been revised, redesigned and expanded, with detailed information and the latest facts and statistics on:

Through his engaging text and on-location photographs, Wayne Lynch captures these birds in their wide variety of activities and behaviors. Penguins of the World will appeal to anyone interested in birds, nature and science.

[starred review] Beautifully illustrated and delightfully written ... The best parts of [the] book are the photographs. Lynch's gorgeous and gorgeously printed images...display such a refined visual sensibility that even without accompanying text, the images would still achieve Lynch's goal of presenting "the scientific and aesthetic appeal of this unique family of birds."

A classic coffee-table book ... Penguins of the World is both well researched and visually attractive, while the charm and downright strangeness of penguins' lives are brought into focus through the numerous colour photos and firsthand testimony of a top polar expert.

Penguins of the World is filled with striking photos depicting the birds, from downy chicks to sleek adults.... Lynch's highly readable text draws on his travel journals as well as historical documents and current research about the seabird that, as he writes, has "become a symbol of all that is special and valuable in nature."

Very nicely illustrated with numerous photos by the author .... Anyone planning a trip to the Southern Ocean, especially to experience its natural world, shousld read this book from cover to cover.

[starred review] Combining detailed information with personal anecdotes and quotes from other scientists/researchers makes the text very engaging.... The abundant colour photographs are absolutely amazing, vibrant and crystal-clear in focus.... Thoroughly researched, Penguins of the World is a tribute to the resilience and the remarkable ability of penguins to survive in harsh climates.

[Lynch] seems to know everything there is to know about penguins.

Enlivened with the author's anecdotes and well illustrated with his clear and intimate photographs, this will undoubtedly be a go-to book for penguin-loving patrons. An easy and fun read.

(starred review) This beautifully illustrated and delightfully written [book] look[s] at Lynch's discoveries about these "flightless seabirds" in the field and in scientific journals, during day-to-day as well as birth-to-death observations, and from the smallest to the largest type. While Lynch presents detailed descriptions of everything from mating rituals to eating habits, the best parts of his book are the photographs. Lynch's gorgeous and gorgeously printed images--such as that of the head of a young penguin chick disappearing inside the throat of a parent as it reaches for a meal--display such a refined visual sensibility that even without accompanying text, the images would still achieve Lynch's goal of presenting "the scientific and aesthetic appeal of this unique family of birds."

A delightfully and brilliantly photographed book about these most unique and endearing of birds... this informative book will charm penguin lovers of all ages.

Penguins of the World is a fascinating introduction written in a style which holds the reader's interest. It is an attractive large format softcover sold at a very modest price. Highly recommended.

[Lynch] has transformed his fascination with these adorable creatures into a delightful book filled with 130 of his color images and plenty of scientific facts that reveal that humans penguins have much in common.

From sex to family life, from feeding to predators the author weaves a delightful tale of the delightful creatures... The photographs are wonderful... If you have never seen wild penguins and are not likely to do so, then this book is the next best thing. Buy it and enjoy it, for only the smell is missing.