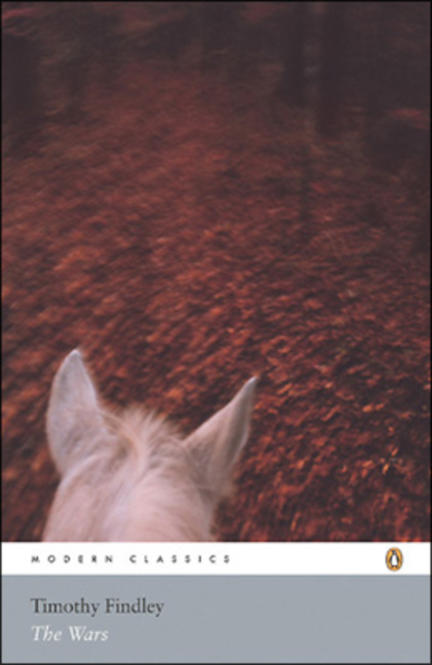 Robert Ross, a sensitive nineteen-year-old Canadian officer, went to war—The War to End All Wars. He found himself in the nightmare world of trench warfare, of mud and smoke, of chlorine gas and rotting corpses. In this world gone mad, Robert Ross performed a last desperate act to declare his commitment to life in the midst of death.

Timothy Findley (1930-2002) was one of Canada's most compelling and best-loved writers. He is the author of The Wars, which won the Governor General's Award and established him as one of Canada's leading writers, as well as Pilgrim and The Piano Man's Daughter, both finalists for The Giller Prize. His other novels, Headhunter, The Telling Of Lies, The Last Of The Crazy People, The Butterfly Plague, Famous Last Words, Not Wanted On The Voyage, and Spadework; his novella, You Went Away; and his short fiction, Dinner Along The Amazon, Stones, and Dust To Dust, have won numerous awards and are well loved both in Canada and internationally.

Elizabeth Rex won the Governor General's Award for Drama and The Stillborn Lover won a Chalmers Award. His works of non-fiction include Inside Memory and From Stone Orchard.

Timothy Findley was made an Officer of the Order of Canada and a Chevalier de l'Ordre des Arts et des Lettres.

Other titles by Timothy Findley

Dinner Along the Amazon

Modern Classics Dinner Along the Amazon