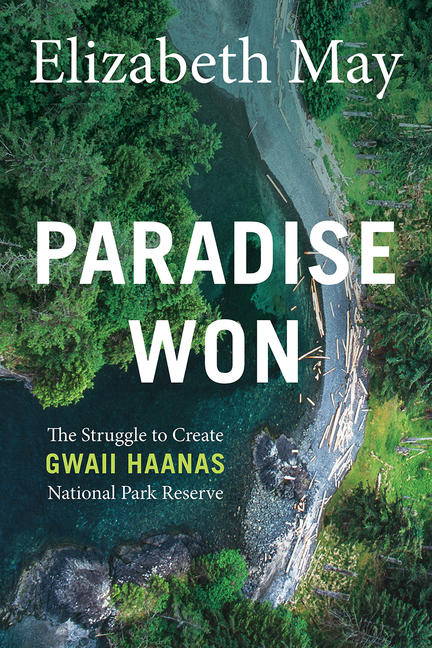 Originally published in 1990, Paradise Won has been updated and details the epic 12-year struggle to stop logging in the unique global ecosystem referred to as “Canada’s Galapagos.”

Gwaii Haanas National Park Reserve is located in the southernmost part of Haida Gwaii (formerly known as the Queen Charlotte Islands), 130 kilometres off the mainland of British Columbia, Canada. Gwaii Haanas protects an archipelago of 138 islands in the territory of the Haida people, who have lived in Haida Gwaii for well over 14,000 years.

From the 1970s through the early 1980s, plans to expand logging in the area led to the first concerted efforts to protect Gwaii Haanas and – in 1985 – the Haida Nation created the “Haida Heritage Site.” In spite of efforts to protect the landscape, logging continued and resulted in a prolonged legal and political battle. In 1987, logging finally ended when the governments of Canada and British Columbia signed the South Moresby Memorandum of Understanding, which safeguarded the area and permitted shared stewardship, treating the unique marine and terrestrial environments as though they were a national park, though many land claims were still outstanding.

This updated edition of Paradise Won includes a new foreword by the author and will bring back into focus this remarkable story of the power and importance of Indigenous rights and how activism can spur average citizens to action in order to fight climate change and protect fragile ecosystems everywhere.

Elizabeth May is the Green Party Member of Parliament for the southern Vancouver Island riding of Saanich-Gulf Islands and served as leader of the Green Party of Canada from 2006-2019. In the 2011 federal election, Elizabeth made history by being the first Green Party candidate to win a seat in the House of Commons and was re-elected in 2015 and 2019. By a vote of her peers, she was named Parliamentarian of the Year in 2012. In 2015, Newsweek magazine named her one of the world's most influential women. She has a long record as a committed and dedicated advocate – for social justice, the environment, human rights, and pragmatic economic solutions. She is the author of eight books, most recently Who We Are: Reflections on My Life and Canada. She has served on the boards of numerous organizations, including the International Institute for Sustainable Development; vice-chair of the National Round Table on Environment and Economy; executive director of the Sierra Club of Canada; and as a commissioner of the Earth Charter International Council. Elizabeth May lives in Sidney, British Columbia.

"In addition to being an amazing story, this book demonstrates why Elizabeth May is a leader who deserves the respect and gratitude of every Canadian. All her life she has been courageous, steadfast and principled in her tireless efforts to make Canada live up to its promise."—Robert W. Sandford, author of Water, Weather and the Mountain West; Cold Matters; Our Vanishing Glaciers; The Anthropocene Disruption; Rain Comin' Down and numerous others

"Haida Gwaii is recognized today as one of the last remaining and most spectacular intact and sustainably functioning geo-cultural regions in the world. It owes its survival and success to its own fearless Indigenous peoples certainly, but also to committed others like Elizabeth May, for whom anything less than full social and environmental justice was not just unacceptable, but simply out of the question." —Robert W. Sandford, author of Water, Weather and the Mountain West; Cold Matters; Our Vanishing Glaciers; The Anthropocene Disruption; Rain Comin' Down and numerous others

"In the 1970s, British Columbia was embroiled in dozens of battles over the future of its magnificent forests. In Haida Gwaii, billions had already been reaped by forest companies with little beyond a few jobs going to the Haida, the traditional inhabitants of the island archipelago. Forest practices of massive clearcuts decimated salmon spawning rivers and streams, topsoil on steep slopes and wildlife found nowhere else on Earth. To the Haida, forests were not just ‘resources' to feed the economy, they were the primary source of food, materials and culture, so they decided to make a stand against further logging at Windy Bay. Supported by environmentalists, the Haida forced Canadians to weigh our economic, political and spiritual stake in the future of this great ecosystem. The Haida have their own powerful perspective on why Windy Bay mattered so much. Elizabeth May provides an environmentalist's insights into how popular and political support were marshalled to protect a priceless heritage. This is an inspiring DIY manual for those involved in the many battles that continue to this day." —David Suzuki, author of Letters to My Grandchildren, The Sacred Balance, Earth Time and many others

"This book is proof that, working together, we can create a better world. Paradise Won is an inspiring read and a shoulder-shake out of defeatist thinking. It is also a timely reminder that there's a lot more to activism than holding up signs or blocking traffic." —Ziya Tong, award-winning broadcaster and author of The Reality Bubble: Blind Spots, Hidden Truths, and the Dangerous Illusions that Shape Our World

"Elizabeth May pulls back the curtains to reveal the tactics: the hard work, the dramatic political battles and the beautiful alliances that saved one of the most pristine and numinous places on planet Earth. Read this book if you want to slay Goliath." —Ziya Tong, award-winning broadcaster and author of The Reality Bubble: Blind Spots, Hidden Truths, and the Dangerous Illusions that Shape Our World

"Elizabeth May's classic account of the struggle that led to the creation of Gwaii Haanas reminds us that those who love their land and want to hold it in trust for future generations, native and non-native alike, will always be stronger than those who slip in like thieves in the night, intent only on extraction and exploitation, all in the name of economic development, the old lie. In standing for their islands, the Haida stood for themselves, laying claim to their homeland, even while inspiring in all Canadians a completely new dream of the Earth." —Wade Davis, author of Into the Silence, The Wayfinders, The Sacred Headwaters and several others

"At times a powerful, resonating narrative of the efforts of the Haida and their allies to protect Gwaii Haanas; at others, a brutal, insider's account of often indifferent, entrenched colonial governments. Paradise Won leaves the taste of eulachon grease on the lips, wafting scents of cedar smoke in the air, and pushes forward with relevance to the present, offering context to the entwined cultural and environmental struggles that surround us." —Caroline Fox, author of At Sea with the Marine Birds of the Raincoast

"Elizabeth May's updated and revised Paradise Won is a primer on how to protect the natural world for a whole new generation of activists. A lesson repeated throughout the book is how vital personal and community connections—by talking in person, or on telephones at a time when long-distance calls were expensive – were to the creation of Gwaii Haanas National Park Reserve. The book is as relevant today as it was 30 years ago when first published. Paradise Won is a reminder that the actors may change, but the fight to protect our planet remains the same." —Jude Isabella, author of Salmon: A Scientific Memoir

"As Canadians we are lucky to have Elizabeth May at this crucial time in our history. Because of her, significant pieces of your natural world are preserved and protected for the future. She possesses that potent combination of intelligence, warmth and broad knowledge. Of her many achievements, the saving of South Moresby from the chainsaw is exceedingly important." —Robert Bateman, artist and naturalist

"Elizabeth May's inherent common sense has carved her a position of serious power beside the throne. She is the conscience of Canada." —Robert Bateman, artist and naturalist

"Elizabeth May has proved herself a champion in every cause she has chosen to espouse. She has chosen well on behalf of nature, and consequently on behalf of humanity, for the two are inseparable. May shoots from the hip, and right to the heart." —Robert Bateman, artist and naturalist

"Elizabeth May's account of the 14 years it took to procure permanent protection for South Moresby is accurate and factual, yet eloquent and evocative. This book is a timely reminder of a pivotal moment in Canadian politics and the preservation of an irreplaceable landmark that stands as an icon of our country's wealth, both historical and natural. It documents the concentrated efforts of like-minded people from many facets of our society, and the power they can wield in front of, beside and behind the prevailing throne." —Robert Bateman, artist and naturalist

Other titles by Elizabeth May

From Excess to Enough

by (author) Ralph C. Martin
foreword by Elizabeth May

Reflections on My Life and Canada

by (author) Elizabeth May