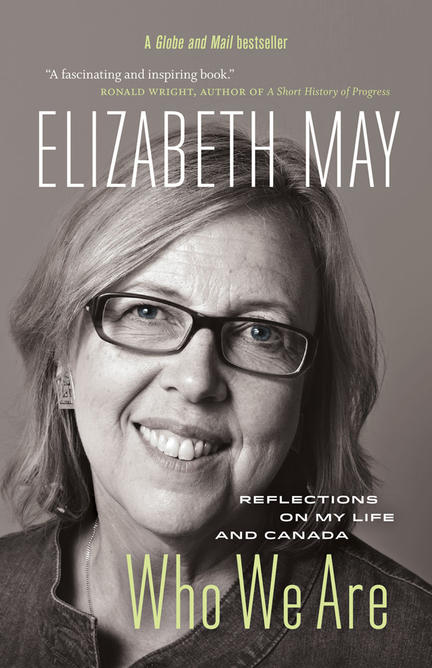 In this marriage of memoir and manifesto, Elizabeth May reflects on her extraordinary life and the people and experiences that have formed her and informed her beliefs about democracy, climate change, and other crucial issues facing Canadians. The book traces her development from child activist who warned other children not to eat snow because it contained Strontium 90 to waitress and cook on Cape Breton Island to law student, lawyer, and environmentalist and finally to leader of the Green Party and first elected Green Party Member of Parliament.

As a result of these disparate experiences, May has come to believe that Canada must strengthen its weakened democracy, return to its role as a world leader, develop a green economy, and take drastic action to address climate change. Who We Are also sets out how these goals might be accomplished, incorporating the thoughts of such leaders and thinkers as Rachel Carson, Jim MacNeill, Joe Clark, Chris Turner, Andrew Nikiforuk, and Robert F. Kennedy. The result is a fascinating portrait of a remarkable woman and an urgent call to action.

Elizabeth May is the Green Party Member of Parliament for the southern Vancouver Island riding of Saanich-Gulf Islands and served as leader of the Green Party of Canada from 2006-2019. In the 2011 federal election, Elizabeth made history by being the first Green Party candidate to win a seat in the House of Commons and was re-elected in 2015 and 2019. By a vote of her peers, she was named Parliamentarian of the Year in 2012. In 2015, Newsweek magazine named her one of the world's most influential women. She has a long record as a committed and dedicated advocate – for social justice, the environment, human rights, and pragmatic economic solutions. She is the author of eight books, most recently Who We Are: Reflections on My Life and Canada. She has served on the boards of numerous organizations, including the International Institute for Sustainable Development; vice-chair of the National Round Table on Environment and Economy; executive director of the Sierra Club of Canada; and as a commissioner of the Earth Charter International Council. Elizabeth May lives in Sidney, British Columbia.

"Who We Are is a compelling, timely and relevant read." Winnipeg Free Press

"May's well documented argument rings true, and her stridency lends the material urgency. ...The best political memoirs leave readers with a rallying cry, and this one is no exception"Quill & Quire

"an amazing book, sarcastic and hopeful but still witty and smart and sharp and inspiring. This is a book that instantly sprints to the top of my list of best books of 2014."John Dupuis, Confessions of a Science Librarian, scienceblogs.com

Elizabeth May is without doubt the most impressive party leader in Canada todaysuperhumanly hardworking, dedicated, smart, witty, and fearless when speaking truth to power and to the public. Who We Are reminds us she is also a fine writer. May’s insider story takes us into her own remarkable life and her profound connection with the lives of others on this planet: great and small, human and not. A fascinating and inspiring book.” Ronald Wright, author of A Short History of Progress

Elizabeth May is a born storyteller in the grand tradition. It may well be that she will achieve her greatest successes in defence of life upon this outraged planet as a writer whose clarity, honesty, and conviction brook no denials." Farley Mowat

Most observers acknowledge that Elizabeth May is Canada’s most effective MP, combining service to her constituents and causes with an uncommon respect for Parliament and democracy. Now her book Who We Are reveals another dimension: a tough and thoughtful activist, zealous, but with a gift for pragmatic compromise and accomplishment.” The Right Honourable Joe Clark, former Prime Minister of Canada

Democracy cannot function if the power of debate is not valued. Elizabeth May’s contribution to many of Canada’s great debates is one that all of us should recognise. As the environment becomes an ever more pressing global issue, our country’s ability to tackle the challenges of climate change will rely on a healthy democracyand in this book, Elizabeth makes a strong case for why and how Canada must step up.” The Right Honourable Paul Martin, former Prime Minister of Canada

In this highly readable book, Elizabeth May tells us of a life lived on the edgeoften the leading edge of big issues of the daybut never at the margins. Others may complain it's not easy being Green, but May has passionately painted her personal and political life in that bold hue. Laced through the book are important warnings about the state of our democracy and our environment, which very much deserve to be heard.” Susan Delacourt, author of Shopping for Votes

"My dear friend, champion of environmental justice, Elizabeth May, has connected with a deep vein of anxiety among Canadians - 'who are we? What kind of country have we become since Stephen Harper became Prime Minister?' Her analysis, built on a wealth of information, is refreshingly clear and honest.? For the first time in ages, I feel hopeful.” Maude Barlow, author of Blue Future

Other titles by Elizabeth May

by (author) Elizabeth May

From Excess to Enough

by (author) Ralph C. Martin
foreword by Elizabeth May