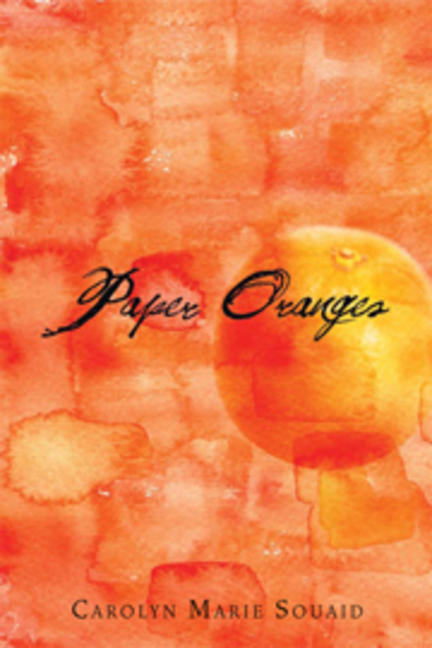 Paper Oranges is a poetic response to Vladimir and Estragon, Beckett's infamous pair, who pin their hopes on salvation that never arrives. It explores the notion of human existence as an extended wait characterized by quiet desperation, loneliness, suffering and the search for self. People who find themselves suspended in time and longing for something to alleviate their boredom tend to idle rather than move forward in any meaningful direction. But could there be an alternate narrative? If so, what shape would it take and how might it forever alter those whose "graveyard lives inside them," those who fill up their days waiting for the next thing--the better job, the bigger car, the perfect spouse, the next terrorist attack?

The Graveyard Lives Inside You

You taste bone in each sip of water. News- print, bits of the previous century, straw, musk.

Those who did or didn’t make a sound when they died, who whimpered, who trumpeted, who hit the road jack, who refused to go gently, day or night; those

whose eyes shot forth, whose pores cried blood, phlegm, urea, whose guillotined heads flew, whose sponge fed the mad cow, whose heart kissed a bullet, whose lips turned black.

You know it as Infinite dusk.

You’re trapped in the cage, the weather, life, against you: sleet’s ermine shawl, groundhogs making meat of your pumpkin. It’s defeat everywhere you look: lean muskrat gardens, graveyards of mangled sinks and telephones. Not once, but twice, you mistook your son for an iPod.

You’re desperate to believe in God but what inhabits you, locked behind a chain-link fence is the blinkety-blank road, the same slovenly dog mutating into something bigger and uglier each day hoarding the inadequate light.

You long to wake up just once with an original thought in your head, an image, some beautiful impossibility

I’ll know when to pack up and call it a life. Plumbing the depths of my January cocoon I’ll do it in style, in my best summer whites. Don’t expect it to be on Saturday night, it might be midweek, say Tuesday in a raging snowstorm. Instinct will tell me the time has come to put it away in the bottom drawer with my winter wools. A bright blue package will arrive with an invitation to comb the dumpster for my island paradise– ferns and wild banana trees, beatnik fauna. Coconuts growing sideways beneath the lucid stars. I’ll pour a flute of pomegranate wine, watch Casablanca one last time. The room floating, the mind bathed in Gauguin’s aquarium light.

On the runway, a plane will be waiting.

Point of No Return

You’re at that point on the journey, familiarity waning with every click of the speedometer. You no longer know which negligible pile of brick is actually your old house. It could take days to find your way back, despite the elastic light. The spaniel you left pattering in the sprinkler might as well be dead for all he remembers you. It takes all your effort just to call him, and even then, his name catches in your throat like a small burr, gets belligerent with the wind, jousting a little before getting sucked under your Michelins. Through the rearview mirror, you’re suddenly aware of firewood jumping off your truck, a couple of grey canisters, your old man’s tackle. You don’t even care that you are swerving. What was once a dot on the map is now less than an afterthought, a box of spare parts banging together in the dark: your neglected porch swing, a moth angry with its lightbulb. Right now, the instant is all you know: the sun breaking out up ahead, contented fieldstone. An elm in the distance, springing new growth. The secret is not looking back.

“ Montreal writer Carolyn Marie Souaid's fifth book, Paper Oranges, is the kind you keep coming back to. Many of her lines have an aphoristic quality: "When you haven't done/ freedom in a while/ you forget/ what it sounds like."

Other times Souaid's clarity is gripping:

"Were we busy watching all-night sports? The good news is good news, of course, practical tips on how to replant: Once daily, kiss an apple. In case of injured ova, make salt. Sing as though the sky were a bowl of oranges."

Souaid is funny too, often just in the choice of titles such as Stuck in Traffic, Listening to a Yuletide Message of the Emergency Broadcast System.

There's anger, wit, and social comment here, in lines that sing on the page.”