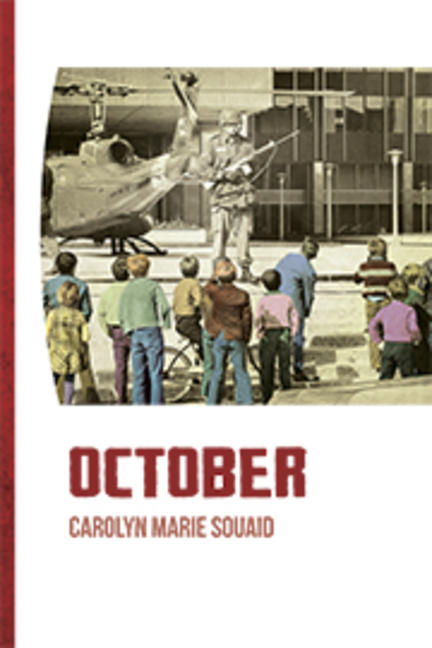 On October 10, 1970, at 6:30 pm, Quebec's Minister of Labour, Pierre Laporte, was kidnapped outside of his Saint-Lambert home by the Chenier Cell of a terrorist group known as the FLQ. One week later, he was found dead in the trunk of a car.

Shortlisted for the QWF A.M. Klein Poetry Award, October is a collection of poetry set in the quiet Montreal suburb of Saint Lambert, where the clash between the "two solitudes" came to a head in 1970 with the kidnapping and subsequent murder of Pierre Laporte by the FLQ. For the narrator, growing up in those days meant living through one of the darkest episodes in Canadian history, a time when army tanks, bombings and other random acts of violence became l'ordre du jour.

October spans three decades of Quebec life, chronicling one woman's attempt to forge some kind of reconciliation between the "warring" cultures, to find the common ground of the French and the English. It is a personal, unabashed look at her own marriage to a French Quebecer which finds her straddling two worlds, two cultures, two very different mentalities. From start to end, echoes of the October Crisis are carefully woven into the text, a constant reminder that the fractious past is never very far behind.

You say necessary, but unjustifiable. I call it murder, plain as day.

It's like walking down the street together, but being in two different afternoons.

Long ago, at the Santa Parade, you clung piggy-backed to your father gazing smack into the world he saw- broken streets thinly veiled as Christmas. Kids from the orphanage pawing Ogilvy's window, elves in warm plaids winking and waving at them from a conveyor belt.

A nobody on the corner, begging for a dime gloves bitten off at the thumbs.

Though we haven't crossed paths yet—won't for 20 years— I'm in that holiday store with my mother shopping for patent leather shoes. A string is looped around my finger. Floating at the end of it a lazy red balloon.

Outside in the scant light, your dad grips your ankles tightly. Warns you to pay attention, never to let go.

The huge snowflakes in his hair brighter than the stars.

“Thematic books, whether poetry or short fiction, have a built-in potential liability. Typically, the entire book strictly conforms to a specified theme. (For example, all the stories are about adultery.) But if the theme is merely suggested, if only the majority of stories or poems conforms, how does one frame the rest of the work to complement the core material? The natural answer might be to have the remaining content reflect, symbolize, or parallel whatever is implied by the title. In this way, there is both cohesion and variety. Anything less would be fragmentary.

Carolyn Marie Souaid has chosen a very obvious unifying principle for her second book of poems, October, namely Quebec's October Crisis of 1970. I was at first a bit surprised by how little of the book is actually about the well-known signposts of that infamous period in Quebec history: the kidnapping and murder of Pierre Laporte, the War Measures Act, the FLQ. Then it gradually became evident that all the poems not obviously pertinent to the theme are still relevant to some degree.

The first poem, "Argument", is about a mother dying of cancer. Her child understands the cancer as "a lone dark bug feeding/on the liver, the kidneys, the brain," and goes on to employ a series of nature-based images for this mysterious force that has entered her mother's body:

somehow she had vanished in the middle of the night the way an earthworm slips into the raw dirt silently, leaving nothing behind but an empty corridor of itself

This cannot be an easy thing, to write of a parent leaving by small, painful increments, in some ways worse than a sudden departure. But Souaid calmly and methodically builds up the tragedy, expressing more of a child's lack of comprehension than an adult's grief, and setting the stage for the shocks described in the ensuing poems.

The next section of the book--the central one--is "October". Like the first (apparently unrelated) poem, the ones in this section are full of foreboding; death, loss, the fear of both looming overhead like one of those military helicopters. Souaid uses the framing technique here, even as specific poems reflect the title. There is good reason for her to do so. The poet was all of eleven years old at the time of the crisis, living in St. Lambert (where she still resides), the site of Pierre Laporte's kidnapping as he played football with his son. It's not surprising that such a startling incident would throw a new light on all her previous assumptions about living in a secure and peaceful environment.

In fact, the real theme of this book is not a national crisis but a personal one. One could call it the loss of innocence. Mothers die. Fathers can be snatched from football games and killed. The world is a dangerous place. Other poems deal with hints of pedophilia, racial prejudice, the ravages of poverty, cruelty to animals, and other threats to a child's tranquil existence.

Souaid has a deft hand, even when painting essentially one gloomy picture after another . . . October is a surprisingly tranquil book about a very turbulent time.”

Shadow of the October Crisis