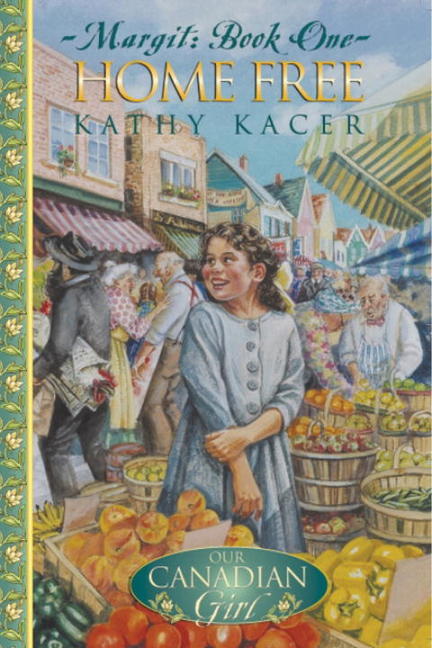 As World War II rages in Europe, Margit and her mother are forced to flee their home in Czechoslovakia and seek refuge in Canada. They are Jews, and although life is difficult in this unfamiliar land, they know life would have been much, much worse had they stayed behind. Many of their neighbours in Kensington Market, the area of Toronto where they have settled, are refugees like themselves, but there are others who look at Margit with suspicion and hostility. And although Margit manages to make some new friends, she cannot help wondering what will happen to her when the war ends. Will she and her mother be sent back to Czechoslovakia? And will they ever be able to find her father, who was taken away by the Nazis before they left?

"I don't see anything yet, Mamma," cried Margit, as she stared out at the endless ocean, straining to catch a glimpse of the approaching harbour and the land that was to be her new home. Grey fog blanketed the ship like a soft comforter.

Her mother held the rail with one hand and her belly with the other. For a moment she closed her eyes, as the baby inside moved from one side to the other, in time with the ship’s gentle roll.

"Keep watching, Margit," shouted Mamma, above the sudden blast of the ship's horn. "The captain says we're very close to Halifax now and we should see the port at any moment." She continued, "After we land it will take us two more days by train to reach Toronto."

Ha–li–fax. To–ron–to. In the past six months, these two odd-sounding names had become strangely familiar to eleven-year-old Margit Freed. And now, along with 280 other Jewish families, she and her mother were finally approaching the land that held the promise of freedom and safety for all of them.

"Our escape was a miracle," Mamma said suddenly. "We are so lucky."

Margit cringed inwardly at the thought of her father. Where was Papa? she wondered anxiously. Margit's mind travelled back to that terrible early morning when the soldiers had come to arrest her father, surprising the family with their loud, terrifying knock on the door.

"Out! Get out now!" the Nazi soldiers screamed, as Papa desperately fumbled for his glasses, trying to dress himself and grab a few personal belongings. There was no time for goodbyes.

Margit followed Papa outside to watch as he was loaded onto the truck and packed in with dozens of other men. He stood tall and proud, as if signalling to his family that he would be fine. Margit strained against Mamma's hand, knowing she dare not call out his name, for fear of drawing attention to herself. Right then and there, she and Mamma knew they had to leave or risk their own capture by the Nazis.

For several weeks after her father's arrest, Margit remained hidden indoors while Mamma snuck out to put the plans for their escape into place. Margit had little idea what Mamma was doing—where she went or with whom she spoke—but she was aware of secret groups that were helping Jews escape from the Nazi terror. The less Margit knew, the less she might be forced to tell if soldiers found her, her mother said. But each time Margit heard the shouts of someone being arrested on the street, she was certain it was her mother. Anxiously she watched the door, desperate to see Mamma's face and relieved when her mother returned at the end of each day.

Finally everything was ready. On the night of April 6, 1944, Margit and her mother waited at home for darkness before moving outside to the back of the house. Mamma felt along the wall for the one stone that was loose.

"Ah, here it is," she said, pulling out the stone and feeling behind for the black velvet purse."It's all the money we have. Your papa and I have been putting it aside for an emergency. Who dreamed we would actually need it?"

Hesitating, Mamma dropped some money back into the purse before replacing it behind the stone. "I'll leave some here for Papa. He'll need it when he joins us," she said, fighting to keep back her tears.

It took them two weeks to cross through Austria and Switzerland into France, and from there into Spain. Fourteen harrowing days with little food, even less sleep, and the most intense fear Margit had ever known. How much money had her mother paid to the man who owned the truck, the farmer who drove the wagon, and the couple whose barn had provided shelter for them during their flight?

Once in Spain, her mother managed to make contact with local officials who were arranging safe passage for Jews to other parts of the world. Their task wasn't easy: these days few people cared about the Jews and their problems. Just when it seemed that no one would take them in, word had come that Canada was willing to accept a small number of Jewish people who had escaped the Nazi terror and who had not yet found a safe haven. But Jews allowed to enter Canada would have to meet certain conditions. They would be admitted only as refugees, not as immigrants. That meant there was no guarantee that they could stay. And they would have to pay $1,000 per family—a fortune! Of course, Mamma hid from Canadian officials the news that she was pregnant. There was no way they would have let her on the boat if they had known. Mamma had been sick the whole way over, but then so had so many others, with the ship's constant tossing and rolling.

As sunlight broke through the clouds, the fog began to disappear like smoke dissolving into the air. Margit strained to make sense of the vague shadows taking shape ahead.

"I see it!" cried Margit, pointing and jumping up and down excitedly. "Mamma, I can see the land."

"Yes, my darling. I see it, too. Come, we'd better go to our cabin and prepare for the landing. We don't want to be left on the boat, do we?" Mamma smiled as she moved away from the railing. She rarely smiled these days, thought Margit. The war and leaving without Papa had worn her down so much that trying to smile seemed almost painful—as if she had forgotten what happiness really was.

Margit rushed ahead of her mother, down the steep stairs to the steerage class on the lower deck and then around the twisting hallway to their small cabin. Inside, she and her mother quickly pulled together bundles of clothing and the few personal possessions they had, while trying to avoid bumping into each other in the tiny room.

Margit caught sight of herself in the small mirror above the cot. She reached up to smooth her long, dark hair, brushing her curly bangs off her forehead. Her green eyes flashed as she glanced down at her wrinkled grey dress and scuffed black shoes. How would she look next to children in Toronto? she wondered. Would she fit in? Would people like her? The questions whirled in her head as the ship’s horn blasted again on the main deck. Docking was under way.