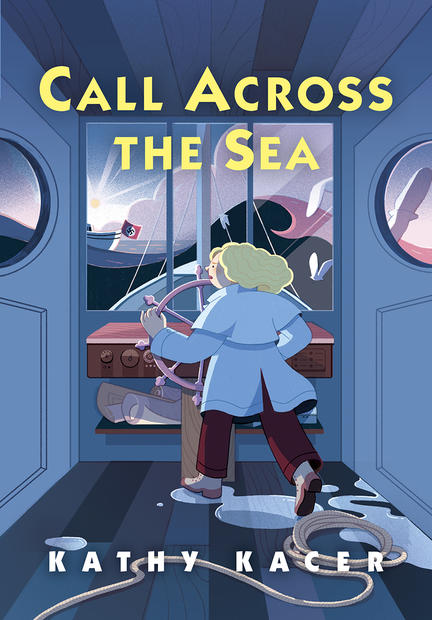 History is made one brave act at a time.

Henny has grown up with her father’s boat, the Gerda III, as a home away from home. She loves sailing the waters between Denmark and Sweden, carried along by the salt breeze. But when Nazi rule tightens in Copenhagen, Henny joins the resistance. And when Hitler orders the Gestapo to round up all Jewish citizens, Henny realizes that the Gerda III isn’t just a boat—it’s a means of escape for her Jewish neighbours. Safety and freedom are just across the channel in Sweden—as long as Henny doesn’t get caught.

The fourth book in Kathy Kacer’s Heroes Quartet series, Call Across the Sea brings to life a little-known part of World War II and highlights the unsung acts of heroism that moved history forward.

Excerpt: Call Across the Sea (by (author) Kathy Kacer)

The next day, Henny found Lukas alone in the schoolyard. “I want to help,” she said.

She had barely slept the night before. Between her earlier conversation with Lukas, the terrible incident she’d witnessed on the street when the two men were arrested, and then hearing Susanne’s childlike statement about being grown-up, something in Henny had changed. She needed to do something, to stand up to those who would overrun her country, who would hurt her neighbors, her fellow Danes. Her feelings scared her—terrified her, in fact! Who wouldn’t be afraid to stand up to the Nazis? But she couldn’t sit still and do nothing. Daring and brave. Those were the words that kept playing in her mind as she faced Lukas in the schoolyard.

“Help with what?” he asked, flipping his bangs off his face.

Henny glanced around. The field appeared to be deserted, but it didn’t hurt to check and make sure no one was lurking about. “I want to join up with your resisters, or whatever your group is called. I want to be part of it.”

Lukas looked around as well, and then took Henny’s arm. He stepped closer to her and bent forward until they were face to face. “Do you understand what you’re saying? This isn’t a game, Henny. What we’re doing is important work. You said you’d never thought about doing anything like this before. So why the change of heart?”

Henny swallowed hard. She told Lukas about the arrest of the two men on the street. “You said that we can’t keep our heads in the sand. And I realized that you’re right. I want to help. I want to be part of any group that stands up to the Nazis.”

Lukas was silent, staring at Henny, appearing to think and rethink what she had said, just as she had pondered the risks and gains of asking to join him.

More seconds passed. Finally, Lukas stood back and breathed in deeply. “All right,” he said. “Give me a couple of days. And remember, you can’t tell your parents about this. No one can know.”

“I was blown away by this book.”

“Kathy Kacer has found a brilliant tempo with this book . . . Filled with lots of action, this would make a fantastic read aloud.”

“Packs in a thrilling escape and a heartwarming conclusion . . . Shows that hope is never lost when good people stand up.”

“Portrays the basic elements of Henny’s amazing story in a format that is appealing to younger readers.”

“This fourth book in the historical fiction series is a strong addition that can stand alone. Readers will be encouraged by Henny’s bravery and may even see themselves in her story.”

“Should resonate with this generation of middle school readers.”

To Look a Nazi in the Eye