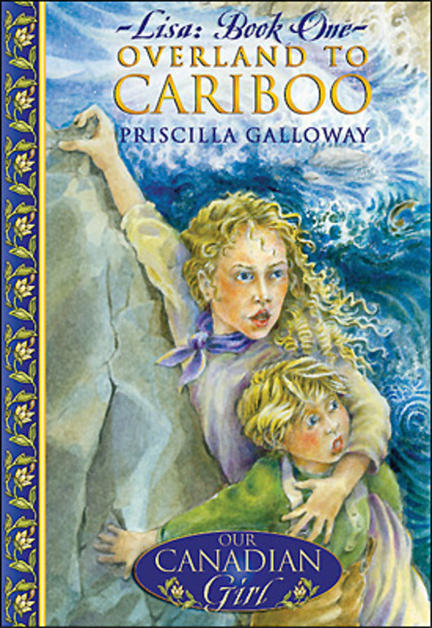 It's the spring of 1862, and an expedition of 150 men is making the perilous journey overland from Quebec and Ontario to the west coast of Canada, where gold has been discovered. At Fort Garry (now Winnipeg), 10-year-old Lisa, her aunt, uncle and their three young children join the group. As Lisa and her family battle their way across the prairies and over the mountains to the goldfields of Cariboo, they encounter terrible hardships?and learn how important they are to one another. Based on a true story, Overland to Cariboo is an exciting tale of danger, courage and loyalty amid the Canadian wilderness.

by Priscilla Galloway and illustrated by Normand Cousineau

"Don't leave me behind, Papa. I'll run after you, and that's a promise." I won't cry, I told myself fiercely, but I could feel the tears on my face. My nose always itched when I cried. I sneezed again and again.

Papa (Uncle Augustus, really) was always more patient with me than with his own three children. I loved him very much, and I did try not to provoke him, though Ma would say it didn't always look that way. Sometimes the words just burst out.

"Good for you, girl," said Ma. Hands on her hips, she glared at Papa, her black eyes flashing.

"I will be, if you forget your manners one more time. Right now, I have other things on my mind. Like telling this man I married we're not staying in Fort Garry without him. We've talked enough these past few weeks, Augustus. If you are going off gold mining in the Cariboo, we are going too, and that's the way of it. Dry your face, Lisa. Chin up, girl. You hear me, husband? What do you have to say?"

"Are you setting yourself against me, woman?"

"Would I do such a thing? It's just that sometimes I know you better than you know yourself, and this is one of those times."

Papa took off his glasses and wiped them with his white handkerchief. "One stubborn female in a family oughtta be enough," he grumbled. "How come I got two of them? I'll worry if I leave you behind; I'll worry if I take you. Dunno which is worse." He settled his glasses on his broad nose and made a face at Ma and me. Then he grinned. "Can't say I wouldn't rather have my family along," he added. "It will be hard, though, going to Cariboo."

I cleared my throat. "I've made hard trips already." My real mama died on the ship coming to America when I was born. Pa raised me in Boston till he took sick, then we went to Uncle Augustus out west in St. Paul. We got there just in time for Pa to die. That was the first hard journey that I remember. Uncle Augustus and Aunt Catherine took me in. I slipped into calling them Ma and Papa, like one of their own. That's mostly how I felt, in spite of what I'd just said.

"You think it'll be easier than when we came to Fort Garry?" Papa asked. "Far as I recall, you were cold and scared all the way."

From St. Paul to Fort Garry, that was my second hard journey. Far as I recalled, we were all cold and scared. I wasn't the only one.

We'd never have left St. Paul, except for the Indians. When settlers came into the Sioux lands, they chased the Natives out. Then—Papa told me—the government didn't pay what they'd promised in their treaty. The Sioux were hungry and miserable. No wonder they were angry at folks like us.

I knew enough to be extra careful around the Sioux who came into St. Paul to trade, because they liked yellow hair like mine so much. Over the years, more than one blond child had been snatched away into captivity. We hadn't begun worrying about Jamie, though. He was a tiny baby without much hair, just fuzz, as light and soft as cornsilk.

Those Indians surely must have sharp eyes! One night, a Sioux brave broke into our house. He smashed the back window and grabbed the baby out of his cradle. Lucky thing I was there! I screamed. Ma was serving beer in the big front room, but Papa came running with the poker. The Indian dropped Jamie, but Papa chased after him and beat him up. I told Papa that the Indian was a coward, not a brave, trying to steal a baby.

Next night, forty Sioux came looking for Papa. The leaders beat on the door, but it held. They began coming round every few days after that. The Sioux are warriors, and Papa had beaten one of them. We knew they would not forget. We all stayed in the house and barred the door. If Papa had to go out for supplies, two other men followed him with their rifles handy. Ma was terrified for Jamie and me, but she knew that the other children weren't safe either. If the Sioux captured one of us, they would take us far away.

Our business was ruined. Who would come to a tavern where the door was always barred? After a couple of weeks, we sold the stock, packed up, and left in the dark. We kept looking back, but we were lucky; no trackers followed us. Perhaps the Sioux were getting ready for winter. It was cold when we set out, and turned colder as we went north.

"It was October when we came to Fort Garry," I reminded Papa. "It's June now. Summer is the best time to travel."

"It could be October when we get to the Cariboo," said Papa.

"Nonsense," Ma broke in. "August, most likely. I don't like Fort Garry, Augustus. I don't like the floods. And how am I supposed to run a tavern and a farm by myself, and look after the children as well? If we were getting rich, it might be different, but we're only scraping by. And what if there's more trouble here, like there was in St. Paul? We should go with you; Lisa's right."

"Is she? The Overlanders will ride fast and hard. They left their own wives and children back east. Maybe they won't let us travel with them."

Before Ma could reply, Pierre came in with a pail of water, his brother Alain at his heels. Pierre and Alain worked for us on the farm. They had come from Montreal.

"Is this a plot? Did my wife talk to you?" Papa frowned, but not as if he were really angry. Then he chuckled. "Certainement, boys, we're all going, you too. Tell you the truth, Pierre, I'm not sorry." He slapped Pierre on the back. "One man with his wife and children, that's not so good. Three men will be much better."

"That's settled then," said Ma. "The Overlanders plan to leave tomorrow. Mr. Morrow's party ordered breakfast at sunup. But we can't be ready that fast, can we?"

"We'll not be far behind them," said Papa. "They're new to this; they won't move fast. Until their feet are toughened, most of them will be nursing blisters."

"We're not tenderfeet," Papa agreed. "The Bishop recommended Charles Rochette, and he’s been hired as guide. I hope he's as good as the Bishop thinks. Now listen to me, all of you—Gus and Lisa, you especially; this is serious. Don't tell anyone that you and Ma are going. It mustn't get back to the Overlanders. We'll catch up, but not for a few days, when it's too late for them to send us back. They won't make us travel alone."

"They'll teach me to pan for gold," I announced, nearly bursting with excitement. "I asked Mr. McNaughton and he said he would if I was there. He made me a promise, and he said a McNaughton never goes back on his word." I twirled around on my toes. Ma made a face at me. She always wanted me to do girl things, like laundry and cooking.

"They should teach me," little Gus chimed in. "I'm a boy." Gus hated to be left out, but sometimes Papa said he was getting too big for his britches.

"Keep out of the Overlanders' way, both of you," said Papa sharply. "Mind what I say." He tugged on his beard, thinking. "We'll be eight souls," he said. "Our wagon won't be big enough. We'll need a Red River cart as well, and oxen. I've bought the mining gear already, but we'll need a second tent."

Mining gear! I could almost see the glint of gold.

Papa teased, "Now that we're closing the tavern, I'd best trade the rest of the whiskey. Maybe that will make my little Irish wife happy."

Ma hated the liquor business, and Papa knew it. She would say whiskey was the devil's own drink, and it was a sorry sight to watch the men throwing their money away when their wives and children needed them at home—and it didn't make her any happier that they threw their money away in our tavern. Now she sniffed. "You'll not be fooling me, Augustus. If the kegs were lighter, I know you'd be taking the whiskey with us, no matter if I was happy or not."

She glared at Papa, then her face softened. Her dark eyes gleamed. Ma never can stay mad for more than five minutes, especially when she's got what she wanted. She dug in her pocket and pulled out a list. "We must have pemmican."

I don't like pemmican myself, I thought, but I'd eat it, grease and all, if there was nothing else.

"Lisa and I will pack," said Ma. "Gus, take Mary Jane out to play, but don't wander off. Lisa, we'll start with the crockery."

We worked quietly for a few minutes, then Ma put her hand on my arm. "Lisa," she began, then stopped. She looked—strangely—shy.

"Since you came to our family, you've been Papa's girl, Lisa," she said at last (as if I needed telling!), "but on this journey, I shall need you more than he will. I wish you were older. Sometimes I will be tired. Then you must look out for the young ones and help with the food and washing; you must be another woman in this family."

Ma, tired? Ma was never tired. And I wanted to be a miner, not "another woman in the family." But Ma was talking as if I was grown up already, as if she could depend on me. I liked that.

Other titles by Priscilla Galloway

Our Canadian Girl Lisa #4 Have I Found a Goldmine

Our Canadian Girl Lisa #3 the Trouble with Gold

The Trouble With Gold

Our Canadian Girl Lisa #2 the Trail To Golden Cariboo

Too Young to Fight

Memories from our Youth During World War II