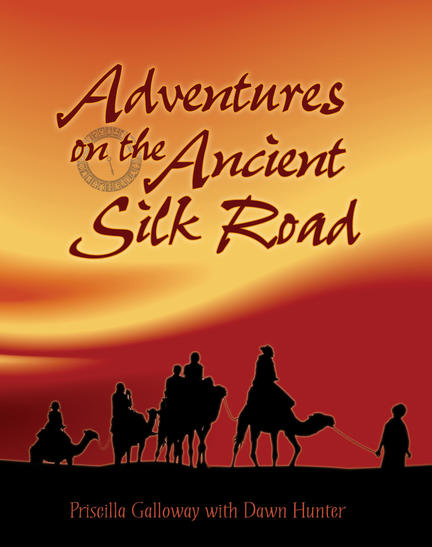 The fabled Silk Road conjures up the sights, smells and sounds of faraway lands: great and diverse cultures separated by deserts sands or windswept mountain passes. But traveling the Silk Road took years, often through bleak and rugged country with few inhabitants. Those who set out fought off bandits, battled starvation and survived treacherous storms.

Chinese Buddhist Xuanzang’s (travels 629 – 645AD), 16-year epic journey from China to India and back is the only source of information we have for huge chunks of the history and geography of this time. His successful search for Buddhist scriptures changed the course of two great nations and he remains an enduring hero of folklore.

Mongolian Genghis Khan (war travels 1201 – 1227), bred from infancy to be a warrior, brought the Mongol clans together into a fighting nation to rule the Silk Road and establish the greatest empire the world had seen.

Italian merchant Marco Polo (travels 1271 – 1295) journeyed through China for 24 years. His journeys changed the way Europe saw the world beyond its borders. His book even inspired Columbus to sail west across the Atlantic Ocean in search of China.

Stunning photographs and art depicting the ancient routes and peoples bring the stories to life. Maps, sidebars and an afterword that highlights the story of the Silk Road are also featured. In the end we too come to know the lands the three travelers explored, and how they were greeted—or cheated—by the folks along the way.

by Priscilla Galloway and illustrated by Normand Cousineau

Dawn Hunter is an editor and the author of several books for young people, including Adventures on the Ancient Silk Road, winner of the Norma Fleck Award for non-fiction. She lives in Toronto, Ontario.

“This great introduction to the mysterious East, or insight into any of the three travelers presented, can be placed in the hands of students interested in history as well as those mesmerized by the lives of others.”—VOYA, 04/10

“Readers ... will find much to appreciate in the lively storytelling, the wealth of detail and the boxes that add background information.”—Kirkus, 11/09

“... gripping historical narratives, sensitively and excitingly fictionalized here, in language that is lively and descriptive, clear but not oversimplified. Vibrant reproductions of art and photos of artifacts leap off every colorful page.”—School Library Journal, *starred review, 12/09

“Galloway and Hunter manage to capture the exotic places and customs associated with the famous trade route … beautifully designed with a lot of colour and numerous illustrations, including appropriate photographs. Highly recommended.”—CM Reviews, 11/09

“This fact-filled book shares gripping tales of three adventurers who changed the way we view the world. Highly recommended.”—Resource Links, 12/09

“Readers will find this an unusually readable and informative account of the subject.”—Booklist, 01/10

The ancient Silk Road – actually a series of trade routes across Asia – is the setting for a fascinating tale from Priscilla Galloway and Dawn Hunter. For about 2,000 years, intrepid travellers journeyed through this fabled route, spending years on the road and facing danger from the elements, animals and other humans.

To tell their story, Galloway and Hunter present three biographies. The Buddhist monk Xuanzang (c.602 -664 CE) travelled from China to India to find and copy original Buddhist texts, but he also spent years teaching and learning from the people he met along the way and acquiring plants and other items to take back to China. Besides translating the scriptures he had brought home, he also wrote a record of his trip that is an invaluable account of life in the many lands he visited.

Their second figure is Genghis Khan (1162-1227) who united the Mongol tribes, conquered northern China and eventually ended up with a kingdom that stretched to the edges of eastern Europe. Though he could not read or write himself, he established a system of law and governance, offering more rights to woman and allowing religious freedom, and his “Mongol Peace” ensured that the Silk Road was safe and profitable for more than 100 years.

The Venetian merchant Marco Polo (c.1254-1324) was a teenager when he went on a trading trip to China with his uncle and father. He spent decades in the Chinese court, becoming fast friends with the Emperor Kubilai Khan (grandson of Genghis) before returning home as a middle-aged man. His record of his adventures was popular with European readers. Although many thought it was complete fiction, mapmakers valued his descriptions. Over 100 years later, Christopher Columbus carried his own copy of Marco Polo’s book as he set out to reach China by travelling west.

Galloway and Hunter offer readers an easily comprehensible, yet entertaining and intriguing, narrative. Each chapter is enriched with sidebars covering a panorama of topics – geographical, historical, scientific and religious – such as the unknown location of Genghis Khan’s grave; the use of silk as armour; the effects of thin air in high mountains and the astounding statues of Buddha at Bamiyan (first described by Xuanzang and recently destroyed by the Taliban).

The text is enlivened by a handsome design with photographs of many places and items connected with the Silk Road and painting and drawings of people and scenes from a variety of artistic sources. Maps by Tina Holdcroft allow us to compare the routes of the three adventurers. There is a detailed index and a section for further reading.

This book has been a longstanding project of noted author Priscilla Galloway and, as she writes, is her last. Kudos to her and to her colleague Dawn Hunter who ably continued the book. Their excellent partnership has resulted in a rich and fascinating read.

The Silk Road’s sights, sounds and smells come alive as you delve into the stories of three explorers: Xuanzang, a seventhcentury Chinese Buddhist; Genghis Khan, a Mongolian warrior; and Marco Polo, a 13th-century Italian merchant. A bibliography and an index accompany this captivating account of three figures who changed history.

Other titles by Priscilla Galloway

Our Canadian Girl Lisa #4 Have I Found a Goldmine

Our Canadian Girl Lisa #3 the Trouble with Gold

The Trouble With Gold

Our Canadian Girl Lisa #2 the Trail To Golden Cariboo

Too Young to Fight

Memories from our Youth During World War II

Other titles by Dawn Hunter

A photo journal of Afghanistan