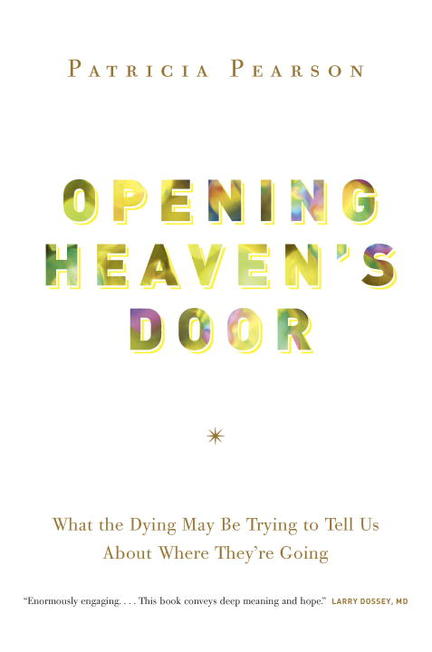 From the award-winning, groundbreaking author of A Brief History of Anxiety...Yours and Mine comes a touching, exhilarating, challenging exploration of the inexplicable gleamings of another world many of us experience, in life, in grief, and near death.

Sparked by extraordinary experiences that occurred in her family when her father and her sister both died in 2008, Patricia Pearson was launched on a journey of investigation into what she calls "a curious sort of modern underground--a world beneath the secular world, inhabited by ordinary human beings having extraordinary experiences that they aren't, on the whole, willing to disclose." Roughly half the bereaved population, about 20% of those near death who recover, and an unreported number of the dying witness or experience a sensed presence, the mystery of near-death awareness, and, if they are not in horrible pain or medicated into unconsciousness, rationally inexplicable feelings of transcendence and grace as they depart on the journey from which none of us return.

Pearson brings us effortlessly into her illuminating quest for answers, inspiring us to own up to experiences we may never have shared with anyone. Secular or religious, all of us wonder deeply about these things if we let ourselves, and also about the medical, social and psychological implications of understanding what it means to pass through heaven's door.

PATRICIA PEARSON is an award-winning journalist and novelist whose work has appeared in The New Yorker, the New York Times, Huffington Post and Businessweek, among other publications. She is the author of 5 books, and was a long-time member of USA Today’s Op-Ed Board of Contributors. She also directed the research for the 2009 History Channel documentary, The Science of the Soul. Known for upending conventional wisdom, Pearson’s first book, When She Was Bad, questioning our simplistic understanding of violent women, won the Arthur Ellis Award for Best Non-Fiction Crime Book of 1997. Her most recent book, A Brief History of Anxiety (Yours and Mine), challenged the notion that mood disorders are purely brain-based, with no relationship to culture and personal circumstance.

LONGLISTED 2015 – BC National Award for Canadian Non-Fiction
“This remarkable new book by Patricia Pearson is a rare thing: bringing journalistic rigour to an impossible question.... The book succeeds so well because it favours questions over answers, humility over certainty, and (when called for) crunchy ice-breaking humour over earnestness. But mostly it succeeds because of its unabashed concern with love, as it’s experienced not just by those at heaven’s door, but by the human tribe that’s inevitably left behind when someone dies. Love, too, is a mystery that changes us.” —Tom Jokinen, The Globe and Mail

“Readers will be humbled and filled with a sense of hope rather than fear as they realize that the deaths of loved ones, or even their own deaths, are not losses, but simply transitions. A fascinating and candid analysis of the process of dying.” —Kirkus Reviews

“Pearson’s research is solid, and she writes clearly about difficult concepts…. She presents a valid case for looking beyond science in matters concerning mortality and the end of life. Opening Heaven’s Door could mark the beginning of a new conversation about death—a subject that, beyond its physical aspects, we are perhaps further from understanding than were our ancestors. Her findings could help us make better sense of our lives and deaths. And we want that, we all want that so much.” —Quill & Quire
“‘On the night of my father’s death,’ said the author’s sister at their father's memorial service, ‘I had an extraordinary spiritual experience.’ How can you put down a book that begins like that? Hardheaded and openhearted, Pearson has brought together riveting accounts of near-death experiences that will shake your assumptions about where life ends, and what death means. For seekers and skeptics alike, Opening Heaven’s Door is profoundly comforting, questing, and wise.”
—Marni Jackson, author of Pain: The Fifth Vital Sign
“Your life is over the moment you die. So I used to believe, with something like religious fervor.  And then I read Opening Heaven’s Door, and such is the power and art, the passion and rigor of Patricia Pearson’s writing that I’m not nearly so sure of myself. This is a splendid book in all the ways a book can be splendid. It is a book to be read and re-read and urged upon friends.”
—Barbara Gowdy, author of We So Seldom Look on Love and Helpless

“In this compelling and provoking read, Patricia Pearson examines death and dying with uncommon thoughtfulness, asking questions too rarely asked. Moving and insightful, Opening Heaven's Door is an important work for all of us struggling with the inevitability of death.”
—Steven Galloway, author of The Confabulist and The Cellist of Sarajevo
“Patricia Pearson’s Opening Heaven’s Door is a fascinating examination of the conclusion of all our struggles and victories: the instant of death. This omnivorous journey through grief and neuroscience and spirituality carries the reader swiftly along and into places we can never truly know—but Pearson provides an unprecedented glimpse.”
—Kevin Patterson, award-winning author of The Water in Between and Consumption

When She Was Bad

How and Why Women Get Away with Murder

Tales from the Domestic Frontier

BC National Award for Non-Fiction Longlist