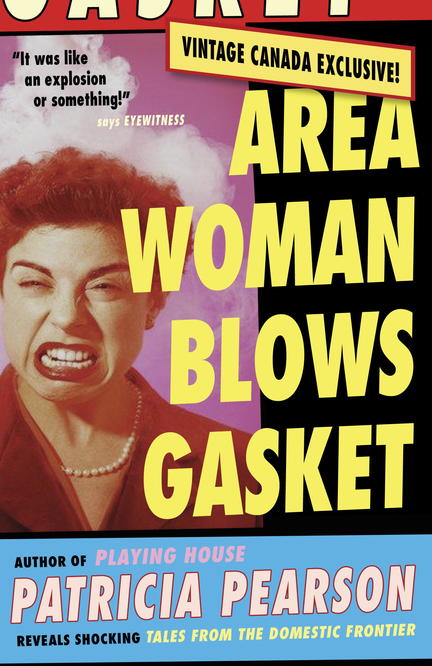 From the author of Playing House comes a sharp and sophisticated collection of essays that takes us on a hilarious tour of our twenty-first-century obsessions and distractions.

Patricia Pearson is a working woman, wife and mother on the verge. Whether it’s being humiliated by the Beauty Bullies at the Lancôme counter or failing to live up to the Serene Mother ideal, Pearson is fed up with negotiating our present-day myths and fads. In Area Woman Blows Gasket, Pearson plumbs every facet of modern life, marriage and motherhood: from choosing the right vegan-bran-hemp diet for your family to confronting your husband’s irrational fear of mayonnaise. Adult education classes, psychotherapy, $100 haircuts, the latest news on what may or may not cause cancer, Christmas shopping — all come into sharp focus with the help of Pearson’s comic eye. Her wry brand of wisdom is a refreshing and long-awaited release from the contradictions thrown at us by society.

Patricia Pearson is a columnist for Maclean’s and a former columnist for the National Post. She is also a frequent contributor to USA Today and the author of the novel Playing House, which was nominated for the 2004 Stephen Leacock Memorial Medal for Humour. Her work has also appeared in the New York Times, the Guardian and Cosmopolitan, and she has won three Canadian National Magazine Awards. She lives in the Gatineaus with her husband and two children.

The other day, I had to write an op-ed for USA Today, which meant that I had to formulate an opinion about something in the news, and this required tracking the news, which is like following an exploding bag of confetti. Facts fly out of media damnably fast, with spectacular aimlessness, and pundits who try to pursue those facts develop something less like wisdom and more like ADD.

“Did you know that the average person swallows five spiders a year?” I asked my husband last night.

“Actually, I don’t plan to,” I said, “because, also, the Middle East is burning down, and some woman sued McDonald’s because she burned her mouth on a pickle, and the actor Richard Harris died, and he had cancer, and women who took the Pill in the sixties are more prone to breast cancer, and cancer charities are being given stock options as a new form of donation, and donations are up for Hillary Clinton, and so are polls, and a new poll suggests that more people in Europe are smoking pot, and pots are on sale at Wal-Mart.”

“I don’t suppose you remembered to buy cat food at the corner store,” my husband replied.

“No, I forgot,” I said. This is how conversations go in our house – I believe the term is nonlinear. “But,” I added, “it would help if the dog stopped gobbling the kitten kibble in addition to his own specially formulated Science Diet for Seniors.”

Of course, my husband likes to point out that our dog and three cats could subsist quite happily on an undifferentiated blend of sparrow corpses and wood chips, if I would just stop buying into the “science” and “expertise” of the pet food industry. But I cannot. I read the news. How, in good conscience, could I feed them dead birds when a “new study shows” that only specially formulated Science Diet for Seniors – or a similar competing brand – will ease digestion in older dogs? How, for that matter, could I, as a worried mother, wife, and woman who wants to reach a ripe old age, ignore what “a new book argues” or what “scientists now believe” about anything?

As I write, a new study shows that “three out of four mothers have no idea what should be in a balanced diet for their children. Food fads and health scares are so common, it has left most mums confused.”

Indeed. That is one way to put it. Addled, guilt-ridden, anxious, constantly at cross-purposes trying to keep up – those are other phrases that spring to mind.

But not to worry. If the news proves too vexing, you have choices. You may choose not to follow it, with the only real consequence being that you never know when the emergency evacuation orders are issued for your town or the cheese you’ve been feeding your children has been abruptly recalled from the shelves.

Alternatively, you may choose to follow select streams of news, pertaining for instance to global warming, the possibility of abrupt climate change, terrorism, and what’s up with Brad and Jennifer. Otherwise, ignore the headlines, and calm yourself down with therapy of some sort. I’ve tried this. It turns out that there are some challenging choices along that road, too. You find yourself whacking through a thicket of options in terms of retail, pharmaceutical, athletic, vacation, or talk therapy, and then have to select from all the vast bemusing subsets to be found therein. So you might skip therapy. Seek wisdom instead. Dabble in kabbalah and change your name to Esther, hire a pet psychic, have your palm read, audit every single course at the Learning Annex. There are so many contradictory possibilities, you could write a book about it. Certainly, I did.

But first, I confronted a basic choice, an A or B question that I highly recommend your answering: Stand in your kitchen clutching parenting books in one hand and credit card options in the other, while the cats eat the dog’s kibble and the phone rings off the hook, and decide whether to laugh or to cry.

News We Can’t Use

The other day, I bought some organic maple syrup, because I’d read something alarming in the paper about lead being present in ordinary maple syrup. I’m not sure if this was because the sap was being stirred with pencils or because the syrup was simmered in vats covered with heavy X-ray blankets. But all neurotic parents know that lead exposure will either kill their offspring or turn them into violent psychopaths. And it is my job, my calling, my necessity and pleasure, to guide my two children through the shoals of a childhood filled with fast-flowing traffic and pedophiles, pesticide residues, asbestos-lined walls, and lead-infused condiments to a safe footing on the shore of adulthood. So I purchased some organic syrup, and then I went home and poured it onto a pair of Eggo waffles.

After a few bites, I put down my fork and stared at my plate. This is sort of silly, I thought. What health advantage am I pursuing? Surely whatever lurks in ordinary maple syrup couldn’t be worse for my family than the unidentified substances that menace our bodies via frozen waffles. If I’m going to be a good mother, I should buy organic waffles.

Thus I went to my local health food store and immediately confronted the domino effect of one organic ingredient demanding another. Organic flax-seed blueberry waffles cry out for organic butter, which in turn demands to be spread on organic bread, or at least on English muffins crafted of spelt, which then require, as logic dictates, a container of organic jam. And so forth and so on, all the way across the food chain, until one has no money left to pay for the children’s shoes. Eventually, I drew the line at soybean potpie. People who won’t eat organic chicken in a potpie shouldn’t eat a potpie; they should eat something else. Like a tofu burger or a chickpea steak. Or really what I am saying – to myself, since I’m talking to myself in the health food store – is that vegetarians ought to get over their weird conceptual attachment to meat and stop eating pretend-meat products. Carnivores don’t try to make their meat taste like vegetables, after all. They don’t go to rib joints and ask for shredded pork slaw or salads made of giblets.

“What’s vegan about this lip balm?” I asked the proprietor, a handsome Asian man with a slicked-back ponytail and a white T-shirt pulled taut over his muscles.

“No beeswax,” he said, which failed to enlighten me.

“What’s wrong with beeswax? Is it bad for you, or are the bees being maltreated? They’re not free-range bees? Is that it?”

“I felt as if I had been entertained at a dinner … where I had grabbed the arms of my dinner mates on either side, mothers all, to keep myself from falling off my chair in laughter.”
—The Globe and Mail

“Too well written to be dismissed as ‘chick lit.’”
—Times-Colonist

“A fresh and lively romp … will leave you lusting for more.”
—Toronto Sun

“Fresh, funny and sweet without being sugary.”
—Chatelaine

When She Was Bad

How and Why Women Get Away with Murder