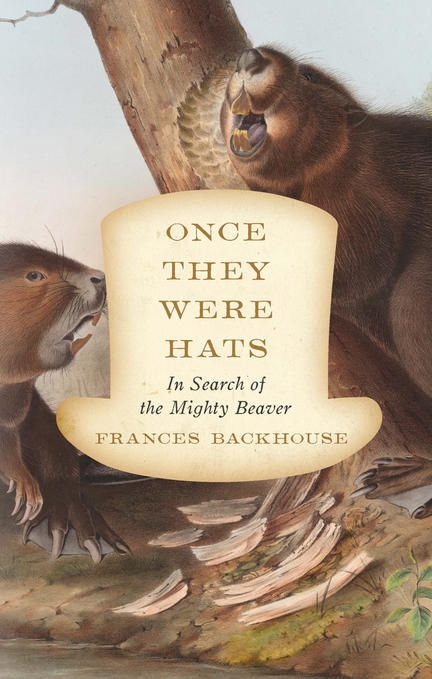 Finalist for the Lane Anderson Award

Finalist for the City of Victoria Butler Book Prize

“Unexpectedly delightful reading — there is much to learn from the buck-toothed rodents of yore.” — National Post

Beavers, those icons of industriousness, have been gnawing down trees, building dams, shaping the land, and creating critical habitat in North America for at least a million years. Once one of the continent’s most ubiquitous mammals, they ranged from the Atlantic to the Pacific, and from the Rio Grande to the edge of the northern tundra. Wherever there was wood and water, there were beavers — sixty million, or more — and wherever there were beavers, there were intricate natural communities that depended on their activities. Then the European fur traders arrived.

Once They Were Hats examines humanity’s fifteen-thousand-year relationship with Castor canadensis, and the beaver’s even older relationship with North American landscapes and ecosystems. From the waterlogged environs of the Beaver Capital of Canada to the wilderness cabin that controversial conservationist Grey Owl shared with pet beavers; from a bustling workshop where craftsmen make beaver-felt cowboy hats using century-old tools to a tidal marsh where an almost-lost link between beavers and salmon was recently found, it’s a journey of discovery to find out what happened after we nearly wiped this essential animal off the map, and how we can learn to live with beavers now that they’re returning.

Frances Backhouse studied biology in university and worked as a park naturalist and as a biologist before becoming an environmental journalist and author. Her six previous books include Once They Were Hats: In Search of the Mighty Beaver and Children of the Klondike, which won the 2010 City of Victoria Butler Book Prize. She lives in Victoria, British Columbia, with her partner, Mark Zuehlke, who is also a writer. Frances loves exploring the natural world both close to home and far away, especially when those explorations involve tent-camping. If there’s a beaver habitat nearby, it’s even better.

“Cod, salt, whales, and water have all inspired terrific exploration narratives. Now the humble, much-maligned beaver stakes a claim to equal accomplishment. Author Frances Backhouse ranges through history, rambles the contemporary backwoods, and brings us all face to face with … wait for it … the Mighty Beaver!” — Ken McGoogan, author of Fatal Passage, Lady Franklin’s Revenge, and Celtic Lightning

“With diligence and brio worthy of its subject, Backhouse restores the beaver to its iconic status as nature’s bucktoothed workaholic.” — Melissa Milgrom, author of Still Life: Adventures in Taxidermy

“Frances Backhouse has written a wise and wily book, effortlessly blending history, natural history, science and sense, she tells us much that we didn’t know about our national totem, and about the persistence of nature caught in the spotlight of civilization.” — Wayne Grady, author of The Natural History of the Great Lakes

“Backhouse’s history of the web-footed mammals that have a historic tie to Canadian identity mazkes for unexpectedly delightful reading — there is much to learn from the buck-toothed rodents of yore.” — National Post

Other titles by Frances Backhouse

Children of the Klondike