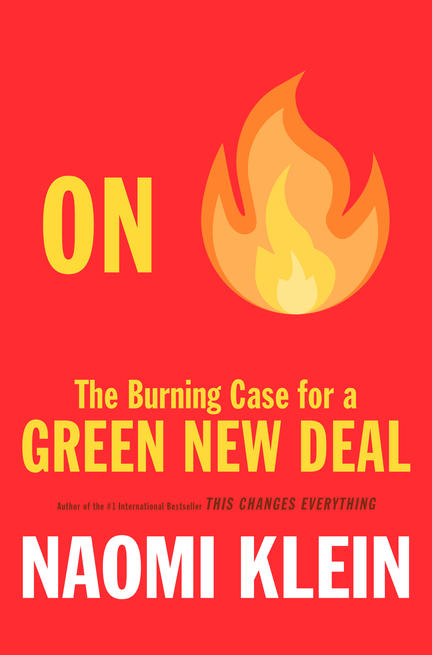 NATIONAL BESTSELLER
A MUST-READ book. Naomi Klein pairs a decade of her powerful writing on our acute environmental decline with new material on the staggeringly high stakes of what we choose to do next; and inspiringly offers here a politically viable, just, sustainable path forward.

For more than twenty years, Naomi Klein has been the foremost chronicler of the economic war waged on both people and planet--and the champion of a sweeping environmental agenda with stability and justice at its center. In lucid dispatches from the frontlines--from the ghostly Great Barrier Reef, to the annual smoke-choked skies of the Pacific Northwest, to post-hurricane Puerto Rico, to a Vatican attempting an unprecedented "ecological conversion"--she has penned surging, indispensable lectures and essays for a wide public, with prescient, clarifying information about the future that awaits us and our children if we stick our heads in the sand. They show Klein at her most thoughtful, tracing the evolution of the climate crisis as the key issue of our time, not only as an immediate political challenge but as a spiritual and imaginative one too.

Delving into topics ranging from the clash between ecological time and our culture of "perpetual now," to the soaring history of humans' ability to change rapidly in the face of grave threat, to rising white supremacy and fortressed borders as a form of "climate barbarism," this is a rousing call to action for a planet on the brink. Above all, she underscores how we can still rise to the existential challenge of the crisis if we are willing to transform our systems that are producing it, making clear how the battle for a greener world is indistinguishable from the fight for our lives.

On Fire is a critical book: it captures the burning urgency of this moment, the fiery energy of a rising movement demanding change now, and lays out an inspiring vision for a sustainable future.

“Naomi Klein’s work has always moved and guided me. She is the great chronicler of our age of climate emergency, an inspirer of generations.” —Greta Thunberg

"I didn’t know this would change my life. It told me what I had to do, and it motivated me to do it."
—Jane Fonda

“Naomi Klein is a precious gift: every time I read her words, my heart leaps from sadness and anger to action. She takes us deep, down to the roots of what is wrong—and then up, up to a height from which we can see what must be done. Everything we love is at stake now: these writings are our best and brightest hope.” —Emma Thompson

“Masterful. . . . What separates Klein from many other advocates for a Green New Deal is her balanced combination of idealism and politics-based realism. . . . Another important addition to the literature on the most essential issue of our day.” —Kirkus Reviews

“Klein’s passion for action reflects the political, social, and scientific gridlock that makes such sweeping, transformational legislation imperative. Her zeal and eloquence will inspire, engage, and motivate those who are concerned about the planet’s future to become even more involved in taking any and all possible steps to curb or reverse further disruption and destruction.” —Booklist

“For a quarter century, now, Naomi Klein has been an outspoken and fearless voice on that which late-stage hyper-capitalism has wrought upon the world: income inequality, overreaching corporate power, for-profit empire building and, of course, the consequent climate crisis. Honestly, we don’t deserve her, and looking back at her seven books one can’t help but think of Cassandra, her warnings ever accurate yet unheeded . . . with her eighth book, On Fire, Klein collects her longform writing on the climate crisis—from the dying Great Barrier Reef to hurricane-ravaged Puerto Rico—and somehow manages to strike a hopeful note as she calls for a radical commitment to the Green New Deal, the kind of collective mobilization that saved us from the brink in WWII, and might be our only hope now.” —Literary Hub

“Expansive and far-ranging, [On Fire] captures the urgency of the fight against climate change.” —Stylist
PRAISE FOR NAOMI KLEIN AND HER PREVIOUS BOOKS:

“One of the most powerful voices in the climate movement.” —Leonardo DiCaprio

“Naomi Klein is the intellectual godmother of the Green New Deal—which just happens to be the most important idea in the world right now.” —Bill McKibben

“No Is Not Enough remains the vociferous advocacy for grassroots, popular political movements that can meaningfully push back against Donald Trump, and the governing political-economic logic of neo-liberalism. . . . [Klein] is shrewd and savvy enough to understand that Trump is a product of a system. . . . Without lapsing into corny cheeriness or the puffed-up cant of centrist political cliché (‘Love Trumps Hate!’), Naomi Klein holds out a cautious hope for the despairing age: an honest, prescriptive belief that people can unite in their opposition to Trumpism to build a better world.” —The Globe and Mail

“This Changes Everything is the basic text of the modern era, the book you must buy, read, re-read, study, treasure and pass on. Climate change is happening and we have to slow it down and prepare ourselves for the convulsion to come.” —Toronto Star

Other titles by Naomi Klein

The Rise of Disaster Capitalism