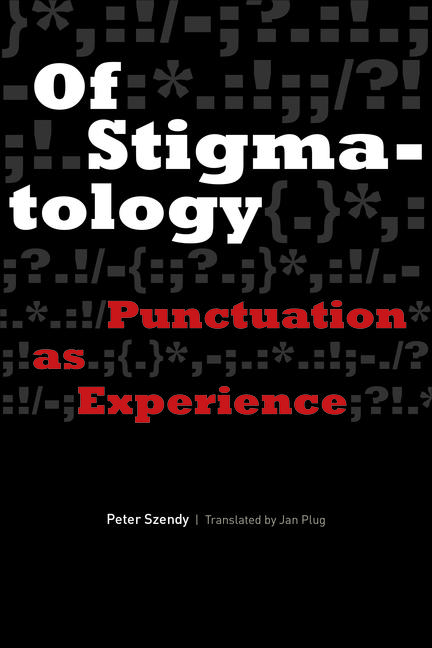 What if our existence is a product of its interruptions? What if the words that structure our lives are themselves governed by the periods and commas that bring them to a close, or our images by the cinematic cuts that mark them off? Are we, like Chekhov's clerk, who dreams of being pursued by angry exclamation marks, or Scorsese's Jake LaMotta, bloodied by one violently edited fight after another, the products of punctuation—or as Peter Szendy asks us to think of it, punchuation?
Of Stigmatology elaborates for the first time a general theory of punctuation. Beginning with punctuation marks in the common sense, Peter Szendy goes on to trace the effects of punctuation more broadly, arguing that looking and hearing are not passive acts of reception, but themselves punctuate the images and sounds they take in. Szendy reads an astonishing range of texts and traditions, from medical auscultation to literature (Chekhov, Sterne, Kafka), philosophy (Hegel, Nietzsche, Heidegger, Derrida), psychoanalysis (Lacan), and film (Raging Bull, The Trial, Fight Club).
Repeatedly, what Szendy finds in these works is a punctuation that marks experience itself, that seeks (and ultimately fails) to bind the subject to itself. This is the stigmatology of the punctuation mark on the page that structures texts from ancient to digital, as well as the punchuation of experience, as though at the hands of a boxer.

Peter Szendy is David Herlihy Professor of Humanities and Comparative Literature at Brown University and musicological advisor for the concert programs at the Paris Philharmonie. His books include Of Stigmatology: Punctuation as Experience; All Ears: The Aesthetics of Espionage; Apocalypse-Cinema: 2012 and Other Ends of the World; Kant in the Land of Extraterrestrials; Hits: Philosophy in the Jukebox; and Listen: A History of Our Ears..

Jan Plug is Professor of English at the University of Western Ontario. Among his other translations is Peter Szendy’s Of Stigmatology: Punctuation as Experience.

Peter Szendy’s brilliant reflections on the punctuation of experience make for a magnificent composition: a new philosophy of the sensible focused on how one feels oneself feeling, and an investigation of ‘how one makes a point’ philosophically and emotively. Never before have exclamation points, dashes, interrogatives, full stops, and quotation marks been treated so existentially; never before has the musicality of existence been so keenly tied to its notation; never before has the distance between points been used so effectively as a measure of life-span. In the “pows!” and “blams” of comic-book blows, glimmers of political violence come into focus. This is an amazing work of philosophy, aesthetics, media, and critique!!!---—Emily Apter, New York University

Of Stigmatology is provocative and eye-opening.

To the now of the point, Heidegger opposes the ecstasy of time. For the past of the point, Deleuze substitutes becoming without history. Both, Peter Szendy objects, are but different ways of punctuating. Cuts, blows, silences, blanks: these stigmata are all irreducible, as are punctuation marks in a text. From ontology to linguistics, from learned treatise to comic book, the grace of this fascinating text brings being back to the infinity of its cut.---—Catherine Malabou, Kingston University

Other titles by Peter Szendy

The Supermarket of the Visible

Toward a General Economy of Images

Other titles by Jan Plug

The Supermarket of the Visible

Toward a General Economy of Images