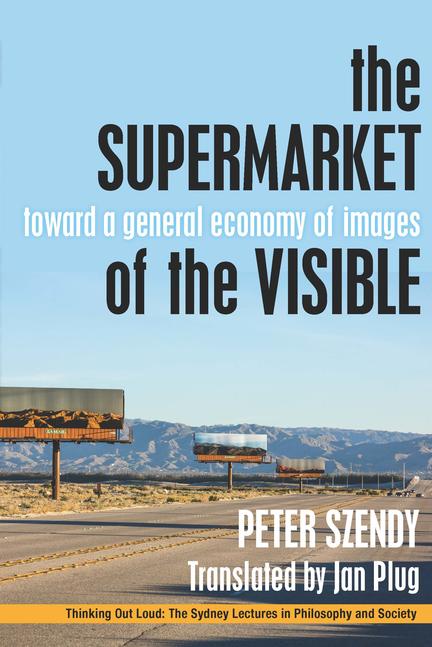 Already in 1929, Walter Benjamin described “a one hundred per cent image-space.” Such an image space saturates our world now more than ever, constituting the visibility in which we live. The Supermarket of the Visible analyzes this space and the icons that populate it as the culmination of a history of the circulation and general commodification of images and gazes. From the first elevators and escalators (tracking shots avant la lettre) to cinema (the great conductor of gazes), all the way down to contemporary eye-tracking techniques that monitor the slightest saccades of our eyes, Peter Szendy offers an entirely novel theory of the intersection of the image and economics.
The Supermarket of the Visible elaborates an economy proper to images, icons, in other words, an iconomy. Deleuze caught a glimpse of this when he wrote that “money is the back side of all the images that cinema shows and edits on the front.” Since “cinema,” for Deleuze, is synonymous with “universe,” Szendy argues that this sentence must be understood in its broadest dimension and that a reading of key works in the history of cinema allows us a unique vantage point upon the reverse of images, their monetary implications. Paying close attention to sequences in Hitchcock, Bresson, Antonioni, De Palma, and The Sopranos, Szendy shows how cinema is not a uniquely commercial art form among other, purer arts, but, more fundamentally, helps to elaborate what might be called, with Bataille, a general iconomy.
Moving deftly and lightly between political economy, aesthetic theory, and popular movies and television, The Supermarket of the Visible will be a necessary book for anyone concerned with media, philosophy, politics, or visual culture.

Peter Szendy is David Herlihy Professor of Humanities and Comparative Literature at Brown University and musicological advisor for the concert programs at the Paris Philharmonie. His books include Of Stigmatology: Punctuation as Experience; All Ears: The Aesthetics of Espionage; Apocalypse-Cinema: 2012 and Other Ends of the World; Kant in the Land of Extraterrestrials; Hits: Philosophy in the Jukebox; and Listen: A History of Our Ears..

Jan Plug is Professor of English at the University of Western Ontario. Among his other translations is Peter Szendy’s Of Stigmatology: Punctuation as Experience.

A gifted writer with real pedagogical talent, Szendy knows just the appropriate dosage of theoretical fine points (which he makes with surgical precision) and shifts register as needed to quite accessible discussions of popular films and television. A significant contribution to our understanding of the image world we inhabit today.---Suzanne Guerlac, University of California, Berkeley,

The Supermarket of the Visible brings together a Marxist critique of the political economy of the image with a celebration of the emancipatory power lurking in the cinematic frame. This unique project provides new possibilities for thinking non-reductively about the relationship between economy and visuality. It transcends the received wisdom to produce a series of unexpected interventions.---Todd McGowan, author of The Impossible David Lynch,

Other titles by Peter Szendy

Other titles by Jan Plug