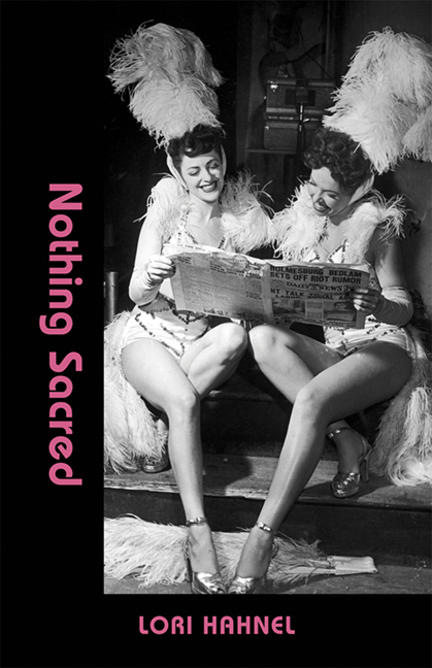 Through tragically satirical stories, author Lori Hahnel tears down everything that western iconoclasm has set up as hallowed: romantic relationships, the fate of good people, the happy ending. In Nothing Sacred, women encounter violence, depression, and heartbreak, but they persevere to tailor new lives from what remains after the dust settles.

Personalities, in these snapshot fictions, evoke comparisons with superstars, as suggested by a woman relating her boyfriends to '60s icons: “kind of a dirty?blond hiker Paul McCartney” and “with his glasses on he?d reminded me of a tall, blond Woody Allen, if you can picture that?. These alterations become the basis for how far the characters attempt to stretch their skin over frames of idealism. The realities that underlie these fame fantasies are bleak: a woman raises her sister's daughter following her sibling's suicide; a punk rock woman forms band after band in an attempt to relive Calgary's '70s underground scene; and a library worker is assaulted on the job site.

Striking friction between the sentimental values of bygone Hollywood flicks and the misgivings of lower class life in western Canada, these stories provoke the everyday where working in retail or having a motel romance is as good as it gets. This collection leaves nothing untouched, nothing sacred.

Descended from a long line of music lovers, Lori Hahnel is the author of three previous fiction collections including Nothing Sacred (Thistledown, 2009), which was shortlisted for the Alberta Literary Award for fiction. Her writing has been published across North America and in the U.K.; her credits include CBC Radio, The Fiddlehead, Prairie Fire, and Room. Relevant to the novel After You’ve Gone is the fact that during the early days of Calgary's punk scene, Hahnel was a founding member of The Virgins, a power-pop punk group that carved its place in Calgary rock history as the city's first all-female band. Today Lori teaches creative writing at Mount Royal University and The Alexandra Writers’ Centre Society, where she served as writer-in-residence in 2013. She has also been writer-in-residence for Alberta branch of the Canadian Authors Association, and is a co-founder and participant in Calgary’s Writing in the Works reading series. She lives in Calgary with her husband and sons.

Other titles by Lori Hahnel