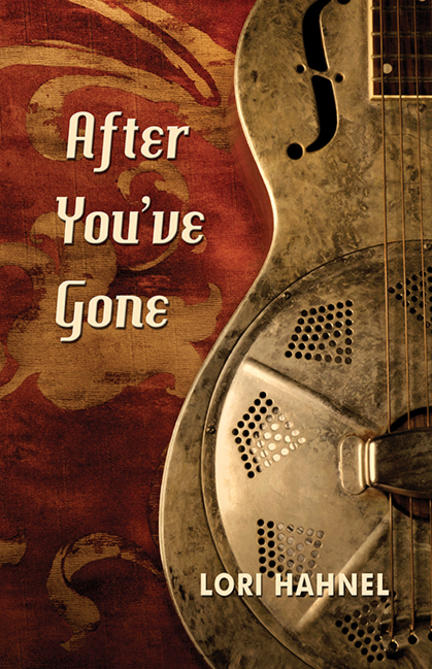 After You've Gone is the story of two generations of musicians, a jazz grandmother and a punk granddaughter, who each struggle with balancing life, love, and art in their respective eras. The novel opens in 2007 with Elsa Taggart and her ex-husband watching their son's convocation from Seattle University. The events that bring about this everyday moment are then revealed in a series of spirited flashbacks that move convincingly between Elsa and her grandmother. Lita and Elsa's lives are revealed in a procession of parallel events.
In 1935 Regina, Lita, as a young woman of gypsy ancestry, develops a passion for playing the guitar. Encouraged and wide-eyed she joins a Regina jazz combo and begins a life that she couldn't imagine and didn't expect. From the first moment that she falls in love with the group's lead singer, to the dark moment of his death, Lita's fate is sealed.
In paralleled abandon, Elsa has become the lead singer / songwriter and guitarist of Speed Queen, a Regina punk band. Her boyfriend Mark Taggart is also in a punk band. In love with the music scene, with each other, and their new baby, they decide their musical prospects would be better in Seattle than in Regina, a move that will prove to bring about significant changes
Though fifty years exist between Lita and Elsa, their circumstances reflect and conform to the lives they have chosen. The daunting risks of the musician's life coupled with the pursuit of intimate relationships lead to the heartache and grief that comes with such adventure. The pain of rejection and betrayal has to be managed, just as the responsibility of commitments must be maintained. After You've Gone is also the story of these two musicians' generations and how those forces that pushed against a jazz-musician grandmother from the Great Depression and those of a female Punk artist from the 80s, are comparable. Balancing career and art in their respective eras was difficult; balancing love, men, and babies was work. Though they are part of different worlds, both are challenged by the pitfalls of women musicians, both are haunted by the love they had for their men, and both were changed by the babies they birthed. Though neither was looking, they were both sagacious enough to link together their common experience and provide strength for each other, bound by their muse and their blood.

Descended from a long line of music lovers, Lori Hahnel is the author of three previous fiction collections including Nothing Sacred (Thistledown, 2009), which was shortlisted for the Alberta Literary Award for fiction. Her writing has been published across North America and in the U.K.; her credits include CBC Radio, The Fiddlehead, Prairie Fire, and Room. Relevant to the novel After You’ve Gone is the fact that during the early days of Calgary's punk scene, Hahnel was a founding member of The Virgins, a power-pop punk group that carved its place in Calgary rock history as the city's first all-female band. Today Lori teaches creative writing at Mount Royal University and The Alexandra Writers’ Centre Society, where she served as writer-in-residence in 2013. She has also been writer-in-residence for Alberta branch of the Canadian Authors Association, and is a co-founder and participant in Calgary’s Writing in the Works reading series. She lives in Calgary with her husband and sons.

When I returned from the store I could see Bill had had coffee, read the paper, and I thought he was out. So I put the groceries away. When I walked by the bedroom, I was surprised to see him packing his clothes into the open suitcase. He looked at me a minute, expressionless, before he spoke. "I'm moving out." I hadn't known how fast things could go. I knew our marriage was in trouble, sure. I was eighteen years old, maybe too young to be married. Still, it was the usual thing then for people that age to be married. I had no idea what to do, and nobody to turn to for help. I didn't even get a chance to try Good Housekeeping's advice, as it turned out. "Where to?" "I'm moving in with Darlene." I didn't know what to say. He'd always denied seeing Darlene, of course, but I knew. Everybody knew. More and more nights through the summer he'd come in late, later. Sometimes he wouldn't come home until morning. I fought a sudden urge to walk out the door, to walk until I couldn't walk anymore. What good being exhausted on the highway halfway to Moose Jaw would do, though, I couldn't tell. "You fucking liar. I knew right from the start that she wanted to take you away from me. Why did you lie to me?" "If you're going to get hysterical, how can I even explain?" "So explain." "It's not that I'm not in love with you. I am. I'll always love you. Things just aren't working out the way I thought they would." He closed the suitcase, took it into the front porch and got his coat and hat off the rack. My mind raced: Now, now, Lita. Say it now. You've got to think of something right now. That was what ran through my mind instead of what I should actually say. His hand went to the doorknob and then I felt like I couldn't get enough air, not enough to talk. I finally gasped, "We can find out what's wrong. We can try. We have to." I am sure I said it but wonder now if maybe I didn't. Maybe I just thought I did, because he didn't seem to hear me. The only thing that made me think he might have heard was a brief grimace that flickered over his face. "Goodbye, Lita," he said, and then he was on the other side of the doorway. And I stood and watched him, still wondered what to say, didn't really believe what I saw. *** Not only did Bill walk out on me, he also didn't come to rehearsals. Otto sang some and so did George, but neither of them sang all that well. That first Saturday at the Hotel Saskatchewan, Jacob Stone innocently asked me where Bill was, probably thought he was sick or something. "He's gone," I said. I saw Henry wince in the background. It probably would have been more kind, or easier for me maybe, if Jacob had happened to ask one of the fellas. But he asked me. "Gone?" "Gone. He left me. And the band." "Oh. I'm so sorry." I shrugged. I had no idea what else to say, because almost anything else would have made tears sting my eyes. Worse than they already were. *** After the show that night, Jacob convinced me to stay and talk. The rest of the band left, Jacob sent the bartender home and tended bar himself, mixed me a series of gin and tonics. I told him everything. I did cry, but not for as long or as hard as I'd expected. Perhaps Jacob's quiet manner put me at ease, but I felt a certain degree of detachment as I told him, as if all of this had happened to someone else. "So he's gone for good?" he asked. "I'm not sure. You know, we were just on the verge of going on a road trip to Seattle. Darlene was in touch with someone who booked acts for a bunch of nightclubs down there, and we were talking about going for a month." Jacob shook his head. "So Darlene's gone too?" "Yes." "Too bad. That would have been a very good opportunity." "It would have been the biggest thing we ever did. I'm wondering if Darlene was putting pressure on him or something. I don't know." "Well, maybe he'll change his mind. But in the meantime, what are the rest of you going to do?" "I don't know. The others want to get a new singer. Well, Otto and George do. You heard them singing tonight. It doesn't work. I think Henry's about ready to fly. He's got a cousin in Edmonton who wants to get a combo together. And me, I just don't think I have the heart for it anymore." "What do you mean? You're fantastic. You get a new band together, your own band." "Well, I know it's no good to stay in Bill's old band and play all the songs he used to sing. But I don't think I could do it myself. I'm a musician, not a performer, you know what I mean? I could always hide behind him. Not hide behind him, exactly, but I liked how he'd deflect the attention away. But the last few nights, to be up there without him - I hated it. I have to give it a rest for a while." "What will you do, then?" "Look for a job, I guess. The only other thing I have experience at is being a chambermaid." "You don't need to do that. How'd you like to be a bartender?"

Other titles by Lori Hahnel