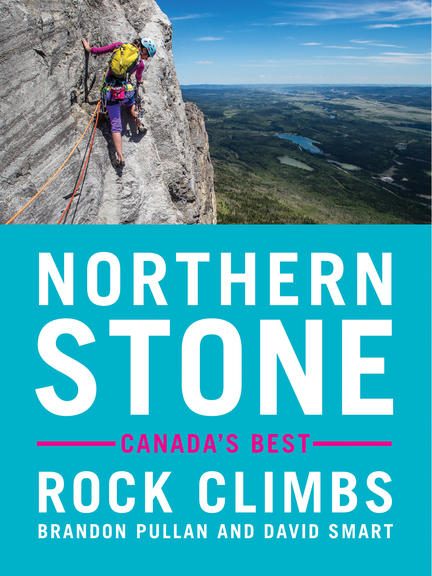 A stunning, full-colour climbing guide that focuses on 65 of Canada’s best rock climbs.

With over 50 years of combined climbing experience between them, authors Brandon Pullan and David Chaundy-Smart have spent countless hours debating and reviewing Canadian climbs to settle on the routes chosen for this book. In order to make the list, the route:

Divided into two sections — Western Canada (British Columbia, Alberta and Yukon) and Eastern Canada (Ontario, Quebec, Nova Scotia, New Brunswick and Newfoundland–Labrador) — Northern Stone profiles an equal number of routes in both western and eastern Canada (something no climbing guide has ever done).

Along with maps and a healthy selection of photos showing the route, each climb includes:

Brandon Pullan was born and raised in Ontario, and graduated from Lakehead University. He started writing for publications in the late ’90s and is now editor-in-chief of Gripped, Canada’s climbing magazine. He has over 100 published articles in print, and countless contributions by him can also be found online. His alpine pursuits have introduced him to dozens of legendary climbers and mentors, motivating him to compile and archive collections of stories from this older generation of mountaineering greats. Brandon is the author of The Bold and Cold: A History of 25 Classic Climbs in the Canadian Rockies (RMB, 2016) and co-author of Northern Stone: Canada’s Best Rock Climbs (RMB, 2018). He lives in Canmore, Alberta.

David Smart has been climbing since 1975 throughout North America and Europe. He has completed hundreds of new routes in eastern Canada and is the founder of Gripped, Canada’s Climbing Magazine, Canadian Running magazine, Canadian Cycling Magazine and Triathlon Magazine Canada. He is also the author of five climbing guidebooks; a memoir entitled A Youth Wasted Climbing, short-listed by the Banff Mountain Film and Book Festival in 2015; Paul Preuss: Life and Death at the Birth of Free-Climbing, short-listed for awards by both the Banff Mountain Film and Book Festival and The Boardman Tasker Prize for Mountain Literature (UK); Emilio Comici: Angel of the Dolomites; and he is the co-author with Brandon Pullan of Northern Stone: Canada’s Best Rock Climbs. He is the editorial director of Gripped Publishing and is still an active new-router in northern Ontario. He lives in Toronto, Ontario.

Other titles by Brandon Pullan

To Be a Warrior

The Adventurous Life and Mysterious Death of Billy Davidson

The Bold and Cold

A History of 25 Classic Climbs in the Canadian Rockies

Other titles by David Smart

Emilio Comici: Angel of the Dolomites

Paul Preuss: Lord of the Abyss

Life and Death at the Birth of Free-Climbing

Guides for Hiking and the Outdoors