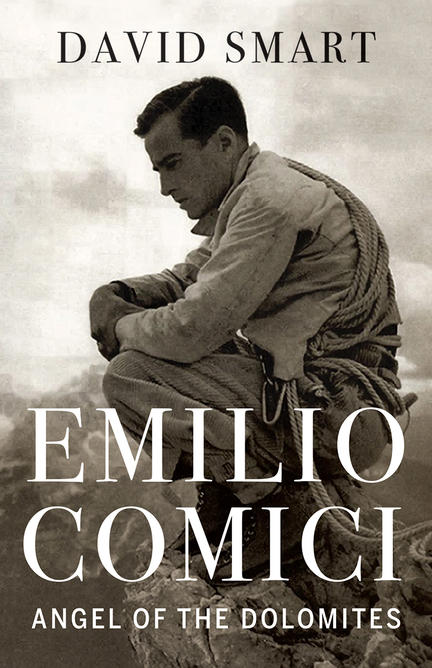 The first English-language biography of one of the most renowned Italian climbers, Emilio Comici, who bagged over 200 first ascents in the Eastern Alps prior to his death at 39 years of age in 1940.

Between 1925 and his death in 1940, Emilio Comici was the pre-eminent climber in the Eastern Alps, the hotbed of global rock climbing at that time. He made first ascents on some of the highest and most notorious walls in the Alps, including the northwest face of the Civetta, as well as dozens of other climbs.

Comici invented many modern big-wall techniques and the big-wall idiom itself that later took root in Yosemite Valley. Comici also made solo ascents of some of the hardest routes in the Alps, including his climb on the north face of the Cima Grande. He also designed the first artificial climbing wall that was ever actually built.

This book explores how family tragedy and growing up in working class Trieste under Austrian occupation shaped Comici’s complex personality and attitudes toward climbing. He was loyal to his friends, deeply concerned about the vulnerable, including his fellow climbers, and yet highly competitive, a born vagabond and yet also a dandy, irresistible to women, and yet unable to settle down, devoted to his mother and to the mountains, and finally, like many other Italian climbers of the period, a member of the Italian fascist party although he was profoundly anti-German and opposed to racial persecution.

David Smart has been climbing since 1975 throughout North America and Europe. He has completed hundreds of new routes in eastern Canada and is the founder of Gripped, Canada’s Climbing Magazine, Canadian Running magazine, Canadian Cycling Magazine and Triathlon Magazine Canada. He is also the author of five climbing guidebooks; a memoir entitled A Youth Wasted Climbing, short-listed by the Banff Mountain Film and Book Festival in 2015; Paul Preuss: Life and Death at the Birth of Free-Climbing, short-listed for awards by both the Banff Mountain Film and Book Festival and The Boardman Tasker Prize for Mountain Literature (UK); Emilio Comici: Angel of the Dolomites; and he is the co-author with Brandon Pullan of Northern Stone: Canada’s Best Rock Climbs. He is the editorial director of Gripped Publishing and is still an active new-router in northern Ontario. He lives in Toronto, Ontario.

"David Smart's immensely knowledgeable and beautifully written biography of Emilio Comici establishes the Italian climber as one of the leading alpinists of the 20th century, an innovator in technical climbing, free soloing, big-wall climbing, and the aesthetic of the direttissima. Smart's thrilling description of Comici's first ascent of the North Face of the Cima Grande in Italy's Dolomites in 1933 literally took my breath away, and places the climb in the same league as the first ascent of the Matterhorn and that of the North Face of the Eiger. This is one of the best climbing biographies I have ever read." —Maurice Isserman, co-author of Fallen Giants and author of Continental Divide

"David Smart has created a nuanced and elegant biography of Emilio Comici, a climber who was immersed in the simmering ideological tension of eastern Italy between the two Great Wars, and who cared deeply about the aesthetics of climbing." —Bernadette McDonald, author of Art of Freedom, Alpine Warriors, Freedom Climbers and Keeper of the Mountains

"Emilio Comici: Angel of the Dolomites cements David Smart as one of the most important mountain biographers of our time. He's proven, once again, that he's a master of meticulous research, expert at unweaving a myth from a man, and uniquely able to offer insight in how time, and place, and mountains themselves, all work to shape the character of a mountain life." —Geoff Powter, author of Inner Ranges

"In Emilio Comici: Angel of the Dolomites David Smart fills an enormous gap in English-only readers' grasp of mountaineering history. Those who knew only of Comici's famous diretissima dictum – that the route should follow the line of a water drop – can now read the full story. And what a story it is! —David Stevenson, book review editor of the American Alpine Journal and past Banff Mountain Book Award winner for fiction and poetry

"Comici was an enigmatic visionary, highly principled and widely misunderstood. His was a world of unclimbed faces and divisive politics, both within the climbing world and in the world at large. Smart's brilliance is equally even-handed as both biographer and cultural historian. A long-awaited and absolutely essential book." —David Stevenson, book review editor of the American Alpine Journal and past Banff Mountain Book Award winner for fiction and poetry

"This absorbing biography vividly reveals how Emilo Comici, perhaps more than any other climber of the 20th century, shaped the future of big-wall climbing. Comici embodied the futuristic vision of Mussolini's Italy where fascism, new technology and the spiritual glorification of the Sixth Grade fused together on the great unclimbed walls of the Dolomites. David Smart writes with the authority of a top investigative journalist and the skills of a dramatist who brings the rivalries and romances of history alive on a vertiginous stage." —John Porter, author of One Day as a Tiger

"Utterly in command of the obscure primary sources, David Smart has crafted a compelling biography of climbing's great misunderstood genius. From the life of Emilio Comici, Smart has extracted new insights into mountaineering itself. It's a dazzling achievement." —David Roberts, author of Escalante's Dream and Limits of the Known

"Emilio Comici was one of the most important mountaineers of the Sixth Grade years and a lover of climbing aesthetics, and yet no complete and exhaustive biography of him had been written before now. With this new book David Smart has filled a void in the history of mountaineering." —Mirella Tenderini, author of The Duke of the Abruzzi: An Explorer's Life and Gary Hemming: The Beatnik of the Alps

"We need books like Emilio Comici to keep us in check with our history, and in this case, the history of climbing. This book provides an articulate understanding of how a barely known Italian climber from the 1930s paved the way for modern-day pursuits on big rock walls. Page after page, the spotlight is drawn to the author's meticulous research and creative composition." — Helen Rolfe, 2020 Book Competition Jury

Other titles by David Smart

Paul Preuss: Lord of the Abyss

Life and Death at the Birth of Free-Climbing