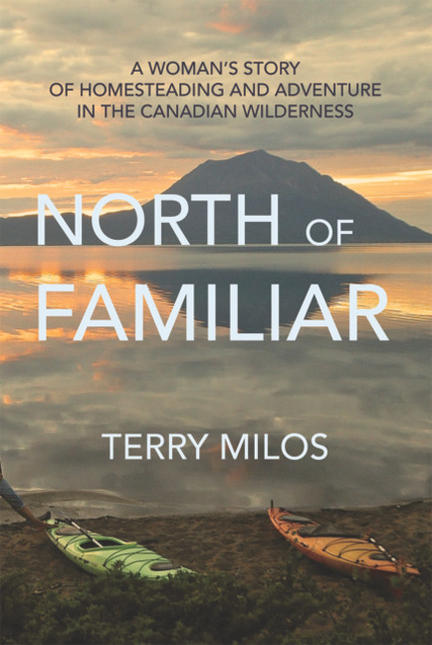 Adventure, family, and the wild — one woman's story of starting a family on the border of BC, the Yukon, and any semblance of human settlement. In 1974, Terry Milos moved to rural northern Canada, to pursue her dream of homesteading. Following the seventies trend of the back-to-landers, she and her partner left the city life for what they imagined would be a simpler existence. Sometimes humorous and often insightful, NORTH OF FAMILIAR is the story of a woman who learned to hunt, fish, and live off the land in what most would consider an utterly hostile and unbelievably cold environment. After a few months of cobbling together a living, Terry reluctantly leaves the north to further her education but with a dream of returning as a teacher. A year later Terry accepts a job in the small town of Atlin where she grows to expect the unexpected. Terry's adventures in the north push her beyond the familiar as she tries to apply her street savvy skills to negotiate a desolate mountain trail, or mush her dogs to school when the deep cold renders her car useless. But there are also times when unfamiliar becomes pure fear, such as when the pilot of a bush plane on which she is the only passenger falls asleep, sending the plane on a downward descent, or when a strange man is repeatedly seen lurking in the woods by Terry's cabin after a trapper mysteriously goes missing. NORTH OF FAMILIAR is about coming to grips with life in the bush far away from the luxuries of the city. In Carcross, Carmacks, Dawson City and Old Crow, Terry navigates the cultural differences between her urban upbringing and the communities of Canada's Indigenous north. In spite of the harsh country, Terry survives and thrives, while raising a family and becoming a part of a strong and unique community. This story is not only entertaining and inspiring, it is also a story of joy, friendship, and change.

Terry Milos was born and raised in Florida and moved to California to attend university. On a hike one day she met an outdoor enthusiast from Alaska who became her husband. They married a year later and moved to northern Canada where they bought property on Little Atlin Lake in the Yukon Territory. For nineteen years, she raised a family and taught school in many remote Canadian communities. North of Familiar: A Woman’s Story of Homesteading and Adventure in the Canadian Wilderness is her first book.