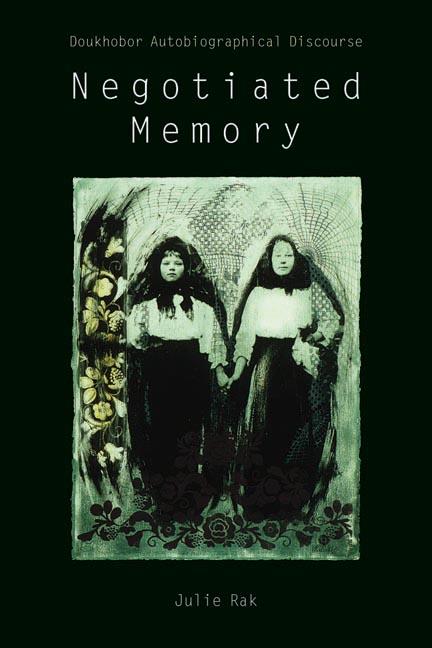 The Doukhobors, Russian-speaking immigrants who arrived in Canada beginning in 1899, are known primarily to the Canadian public through the sensationalist images of them as nude protestors, anarchists, and religious fanatics – representations largely propagated by government commissions and the Canadian media. In Negotiating Memory, Julie Rak examines the ways in which autobiographical strategies have been employed by the Doukhobors themselves in order to retell and reclaim their own history.

Drawing from oral interviews, court documents, government reports, prison diaries, and media accounts, Rak demonstrates how the Doukhobors employed both “classic” and alternative forms of autobiography to communicate their views about communal living, vegetarianism, activism, and spiritual life, as well as to pass on traditions to successive generations. More than a historical work, this book brings together recent theories concerning subjectivity, autobiography, and identity, and shows how Doukhobor autobiographical discourse forms a series of ongoing negotiations for identity and collective survival that are sometimes successful and sometimes not.

An innovative study, Negotiating Memory will appeal to those interested in autobiography studies as well as to historians, literary critics, and students and scholars of Canadian cultural studies.

Julie Rak is a Professor in the Department of English and Film Studies at the University of Alberta. She holds an Eccles Fellowship at the British Library for 2017-2018 and is also a Killam Professor at the University of Alberta for 2017-28. She is the University of Alberta nominee for the Royal Society of Canada 2018 Lorne Pierce Medal for excellence in Canadian literature scholarship. The author of Boom! Manufacturing Memoir for the Popular Market (2013) and Negotiated Memory: Doukhobor Autobiographical Discourse (2004), Julie has contributed as an editor to many volumes of critically-acclaimed work. With Hannah McGregor, she is the co-author of the Counter-Letter against UBCAccountable, and she sponsors the letter and signatures on a website, accompanied by resources about the controversy. Julie was born on traditional Haudenosaunee territory in New York State, and grew up in Delmar, NY, the traditional territory of the Kanien'kehaken (Mohawk). She currently lives and works on Treaty 6 and Metis territory in Edmonton, Alberta, Canada.

This will be a useful and informative text for students of Canadian studies, as well as those interested in critical autobiography and identity theory ... Rak does a very good job of navigating the complex topography of Doukhobor autobiographical discourse within the Canadian historical landscape.

What Rak has written is a serious and worthwhile addition to our understanding of the way a marginalized people struggles, against all those social currents that would silence them, to find and honour a collective autobiographical voice.

In her methodologically ground-breaking book, Negotiated Memory, Julie Rak uses autobiographical discourse (as opposed to autobiographical genre), cultural context, and historical narrative to theorize about the relationships among the meanings of identity, place and nation…However, the book is much more than an innovative use of autobiographical discourse as a post-colonial tool useful in studying powerless groups. Negotiated Memory is also a rich cultural history of the migration and adaptation experiences of an often misunderstood religious group.

Other titles by Julie Rak

Manufacturing Memoir for the Popular Market