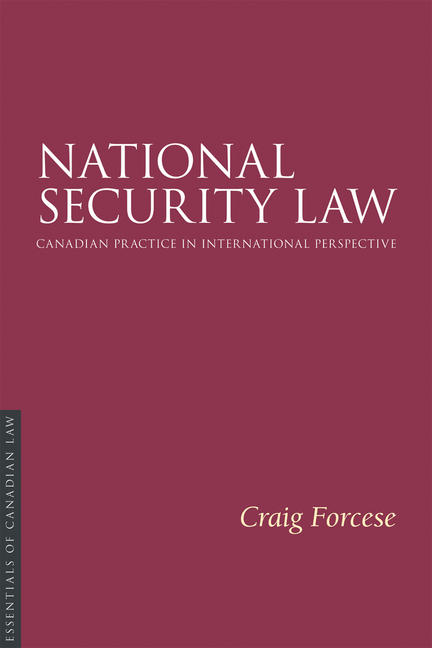 National Security Law is a comprehensive handbook that focuses on the law and legal instruments governing the Canadian state's response to events that jeopardize its "national security." Specifically, these are events or plausible threats with the potential to inflict massive injury on life and property in Canada

National security law is governed by a vast array of federal and provincial statutes. But this text, part of Irwin Law's Essentials of Canadian Law series, also draws on core international, constitutional, and common law doctrines and the comparative legal experience of other states. In addition to describing in detail the applicable legal principles, the book flags key dilemmas and challenges that run through national security law. It also critically assesses certain issues of contemporary relevance, such as the use of armed force, torture, government secrecy, surveillance, intelligence information sharing, and detention without trial.

National Security Law is divided into three main parts along the following themes:

Craig Forcese is an Associate Professor of Law, Faculty of Law, University of Ottawa. There, he teaches administrative law, public International Law, and National Security Law and runs the annual foreign policy practicum. Much of his present research and writing relates to democratic accountability, national security, and international law. Prior to joining the law school faculty, he practiced law with the Washington D.C. office of Hughes Hubbard & Reed LLP, specializing in international trade law. Craig has law degrees from the University of Ottawa and Yale University, a B.A. from McGill, and an M.A. in international affairs from the Norman Paterson School of International Affairs, Carleton University. He is a member of the bars of Ontario, New York and the District of Columbia.

"This book fills a notable vacuum in Canadian legal writing.... [I]t should ... be at the elbow of every Canadian security intelligence officer, law enforcement official, government policy-maker, elected politician, lawyer, or judge who must deal with national security issues in their professional life."

Other titles by Craig Forcese

Every Cyclist's Guide to Canadian Law

The Laws of Government, 2/e

The Legal Foundations of Canadian Democracy

The Human Rights of Anti-Terrorism