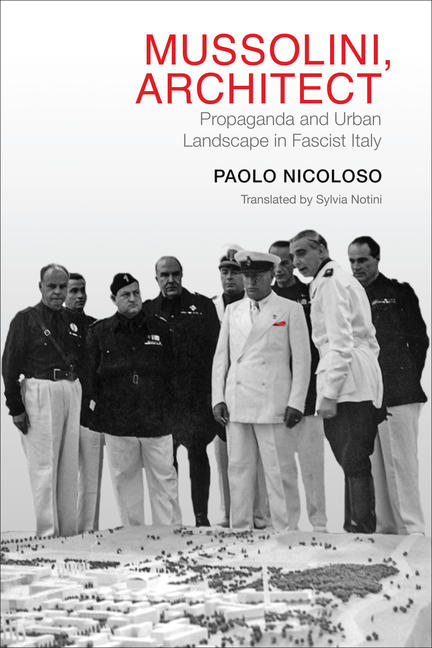 During the fascist years in Italy, architecture and politics enjoyed a close alliance. Benito Mussolini used architecture to educate the masses, exploiting the symbolic prowess of architecture as a powerful tool for achieving political consensus.

Mussolini, Architect examines Mussolini in Italy from 1922 to 1943 and expands the traditional interpretations of fascism, advancing the claim that Mussolini devised and implemented architecture as a tool capable of determining public behaviour and influencing opinion. Paolo Nicoloso challenges the assertion that Mussolini was of minimal influence on Italian architecture and argues that in fact the fascist leader played a strong role in encouraging civic architectural development in order to reflect the totalitarian values of the period. Drawing on archival documents, Nicoloso lists the architects who gave Mussolini ideas and describes the times when the dictator himself sometimes picked up a pencil and suggested changes.

Examining the political, social, and architectural history of the fascist period, Mussolini, Architect gives careful attention to the final years of fascist rule in order to demonstrate the extent to which Mussolini was intent on shaping Italy and its citizens through architectural projects.

Paolo Nicoloso is an associate professor of architectural history at the University of Trieste.

Sylvia Notini is an Italian-to-English translator who focuses on books about art, travel, photography, and architecture.

Other titles by Paolo Nicoloso

Other titles by Sylvia Notini