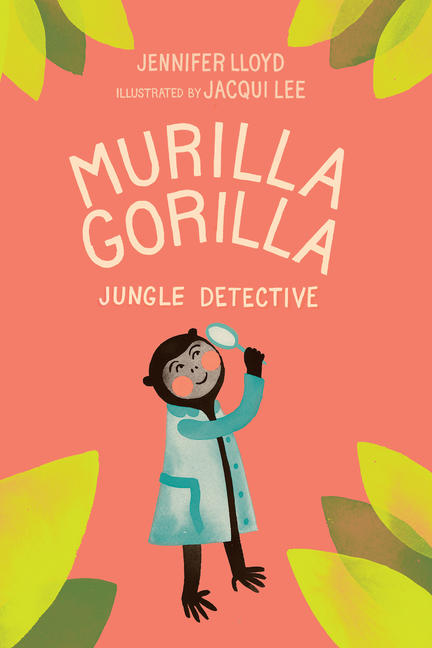 Murilla Gorilla, the jungle detective, is woken up by a new case: Ms. Chimpanzee's muffins were stolen. But who did it? It's up to Murilla to find out... as long as she can find her badge first! Murilla may seem like a hopeless detective—disorganized, messy and always thinking about her next snack—but out of her mess come some pretty good ideas, and some pretty funny moments too.

Jennifer Lloyd is the author of several children's books, including Looking for Loons (a Canadian Toy Testing Council Top 10 pick), Ella’s Umbrellas (an Alcuin Award for Excellence in Book Design winner, and a Rainforest of Reading and Christie Harris Children’s Literature Prize nominee), The Best Thing About Kindergarten, Taffy Time, and the Murilla Gorilla series (multiple books in the series are Alcuin Award for Excellence in Book Design winners and Canadian Children's Book Centre Best Books for Kids and Teens selections). When she is not at her writing desk, she works as a kindergarten teacher in Blainville, Québec. You can find out more about Jennifer's books at www.jenniferlloyd.ca.

Jacqui Lee’s illustrations are focused on storytelling and are inspired by the world around her. Jacqui's I Am Josephine was a CCBC Best Book for Kids and Teens and she was awarded an Alcuin Society Award for Excellence in Book Design for Murilla Gorilla and the Hammock Problem. Her work is fun, cheerful and aims to bring a smile to people’s faces. She loves the handmade and textural look of gouache paint and often carries a sketchbook with her, especially while travelling. An alumnus of the Alberta University of the Arts, she now lives in London, UK.

2013 Alcuin Society Award for Excellence in Book Design, second prize winner!
2014 Canadian Toy Testing Council 'Recommended Read'!
2014 Ontario library Association 'Best Bets for Children'!
Canadian Children's Book Centre Best Books for Kids and Teens 2013 STAR!
"Murilla Gorilla is, above all, a pleasure to read and look at. Like the cheeky rascal who stole the muffins, readers will be hungry for more."
~New York Times
"Murilla Gorilla joins a proud tradition of sleuths whose cases are solved as much by dumb luck as by skill. Over five chapters, Murilla tries to figure out who ate the banana muffins that Ms. Chimpanzee had been planning to sell at the Mango Market. Readers will quickly get the sense that Murilla isn’t a conventional detective. In the first chapter, she goes back to sleep after getting Ms. Chimpanzee’s phone call, and it takes her some time to track down her backpack and badge (“It was in the bathtub!”). Lloyd (Ella’s Umbrellas) works lots of deadpan humor into her trim sentences. “Do you like bananas?” Murilla asks Ms. Chimpanzee, getting an idea. “Murilla! I am not the muffin thief!” shouts the increasingly frustrated baker. While this is a charming debut for Murilla, it’s also a strong one for Lee—her sherbet palette and friendly characterizations are an ideal fit for the book’s blend of mystery and comedy. When Murilla dons a banana tree costume and tries to stay awake long enough to catch the perpetrator, she’s nothing short of a vision. Ages 5–8."
~Publisher's Weekly
"There is mischief afoot at the Mango Market, and Murilla Gorilla is on the case. In this first entry in a new series of early reader mysteries, Murilla is hired by Mrs. Chimpanzee to solve the case of her missing banana muffins. Readers won’t need to borrow Murilla’s magnifying glass to follow along with the clues, which establish a motive and possible suspect early on. Murilla’s meandering detection allows readers to meet several supporting characters who represent the variety of exotic animals living in the jungle. And though Murilla may wander, the text does not; the chapters are succinct and the vocabulary focused, keeping new readers on track and interested. The illustrations are awash with soft pastels, creating a backdrop as warm as the sun over the African rain forest. Often sleepy, slightly disorganized, but never in a rush, Murilla Gorilla has her own methods, which mystify and frustrate her client but get the job done."
~Booklist, Kara Dean
"When banana muffins disappear from Ms. Chimpanzee's stall at the Mango Market, Murilla Gorilla is on the case. A trail of crumbs leads her to footprints, which she follows around the market. Mandrill, Hippo, and Tree Frog make impressions in the sand, but they are nothing like the tracks she is following. After taking a break at Leopard's Lemonade Stand, the detective visits Anteater's Crunchy Cookies and Okapi's Hammocks. As neither animal eats bananas, she resorts to a banana-tree disguise that attracts Little Chimp. His footprints match those of the muffin thief. While the satisfied detective sleeps beneath a tree, Ms. Chimpanzee and Little Chimp bake a new batch of muffins. The watercolor artwork features a peach, lime, and turquoise palette, capturing the languid, slow-paced world of the African rain forest. Murilla takes her time examining clues, talking to suspects, and trapping the culprit with a getup from her bottomless backpack. This charming, easy-to-read chapter book will delight emerging readers."
~ School Library Journal, Mary Jean Smith, formerly at Southside Elementary School, Lebanon, TN
"Most early readers are pretty straightforward stories, set in vague times and places, without much urgency to the plot except whatever spirit the characters bring to the story. But the Murilla Gorilla stories are mysteries for the very young. The artwork is gorgeous. The setting is exotic. And Murilla won’t rest until she solves the case of the missing muffins. Maybe this series should be called'“My First Page Turner.'"
~Barnes & Noble Kids Blog
"Murilla Gorilla: Jungle Detective provides a stepping stone from early readers to first chapter books. Each of its five chapters contains 6 to 8 pages, and clear medium sized text is balanced well with white space. Short sentences and plenty of dialogue allow for easier reading and keep the story moving. Although the book would make sense through text alone, whimsical watercolour illustrations by Jacqui Lee provide support and will appeal to readers who still enjoy reading pictures as well as text."
~ CM Magazine 4/4 STARS REVIEW!

Other titles by Jennifer Lloyd

Stories and Recipes that Nourish Community

The Best Thing About Kindergarten

Other titles by Jacqui Lee

(And I Am a Living Thing)