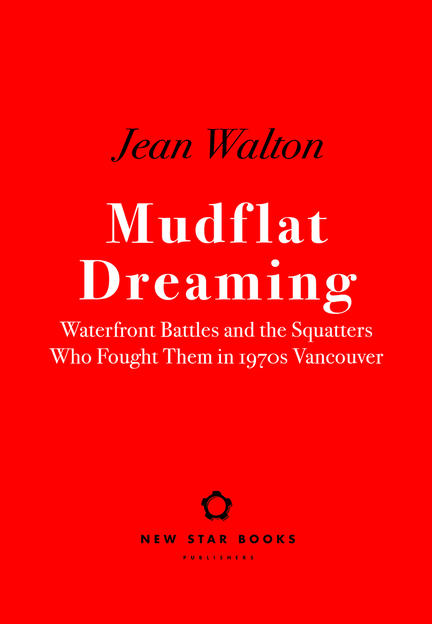 Mudflat Dreaming tells the story of two communities on Vancouver's waterfront fringes in the 1970s.

On the North Shore, a counter–cultural village of float houses and shacks on stilts sprouted on the estuarial Maplewood Mudflats. A few miles to the south, on the southern banks of the Fraser River above New Westminster, the long–established Bridgeview neighbourhood was mired in an endless battle with local city council for basic amenities.

As a teenager, Jean Walton lived just up the hill from Bridgeview, but it was only much later that the author learned about the struggle embroiling her near neighbours, as well as its connection to the Maplewood Mudflat squatter community ––– not to mention Malcolm Lowry and Habitat 76.

Walton's way into these stories is through a few documentary films made at the time about Bridgeview and Maplewood, as well as Robert Altman's breakthrough feature film, McCabe and Mrs. Miller, shot just a few miles up the mountainside from the Maplewood Mudflats.

"Jean Walton's lively account of two quite different communities in the 1970s resisting a growing "culture of cement" appears at a time when Vancouver's neighbourhoods are being eaten up by that same cement. Part oral history, part film archive research, Mudflat Dreaming resuscitates the spirit of opposition to uniformity and profit–making at the expense of those who recycle, self–build, and live by water. This is necessary history, rooted in place and deeply West Coast." ––– Daphne Marlatt

Jean Walton has spent the last twenty–five years as a professor at the University of Rhode Island, teaching courses on literature of World War I, activist documentary, seventies pop cultural films, and all waves of feminist theory. She divides her time between Providence, RI; Maine; and the Fraser Valley outside Vancouver, where she grew up.