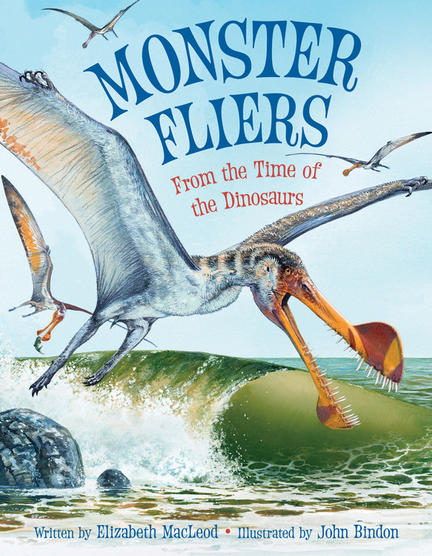 While the dinosaurs walked the earth, pterosaurs (flying reptiles), ancient birds and other monster fliers ruled the skies. John Bindon's illustrations, created with the help of the latest fossil research, bring nineteen of these long-vanished creatures to life with startling brilliance. Some of these monster fliers were as small as a crow, others as big as a small plane.

Monster Fliers brings together the latest research in clear, engaging text and dramatic illustrations, making it a great addition to a young child's dinosaur collection. The book includes a timeline to show when these creatures lived as well as a chart indicating their relative sizes.

John Bindon specializes in illustrating prehistoric life. He has also worked on dinosaur exhibits for museums and theme parks and on animation projects for Discovery Television and Walt Disney Feature Animation. John is the illustrator of Monster Fliers. He lives near Toronto.

Bindon's illustrations infuse the pages with colour and action, ensuring there is plenty to look at and admire.

Together, MacLeod and Bindon, in clear and fact-filled text and nicely detailed paintings, respectively, give life to these ancient flying reptiles and birds.

... of this attractive picture book sure to appeal to dinophiles eager to learn more about dinosaurs' flying cousins.

Monster Fliers: From the Time of the Dinosaurs

Young dinosaur lovers will want to add this book, with its fascinating information about the monster fliers that soared through the skies millions of years ago, to their collections. These pterosaurs (flying reptiles), ancient birds and other flying creatures ruled the skies while dinosaurs roamed the earth. Nineteen creatures are profiled, and dramatic illustrations fill each page.

Other titles by John Bindon

And Other Prehistoric Critters That Roamed the Planet