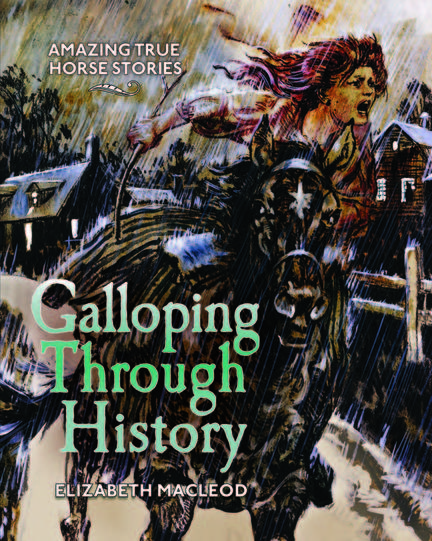 Powerful, spirited, and beautiful, horses have literally changed the world.

From the time people first rode horses more than 5,000 years ago, these amazing creatures have changed the way humans live, travel, fight, work, and play. In her captivating, story-telling style, author Elizabeth MacLeod brings to life some of the most exciting examples of how horses have influenced the course of civilization.

Read about Bucephalus, the valiant horse that led Alexander the Great fearlessly into battle; the mighty Mustangs used by the Native peoples to hunt buffalo; hard-working pit ponies that helped fuel the Industrial Revolution by hauling coal out of mines, and the Pony Express, that helped revolutionize the way people communicated. There are six chapters in all, including one about Seabiscuit, whose triumphs at the racetrack provided people with hope and encouragement during the dark days of the Great Depression, and Sybil Ludington’s horse Star, an unsung hero of the Revolutionary War.

Horses hold a natural fascination for many young people. What better way to introduce them to world history than through the stories of these magnificent animals.

“A hit with horse lovers.”

“MacLeod is a master researcher and a very adept storyteller.”