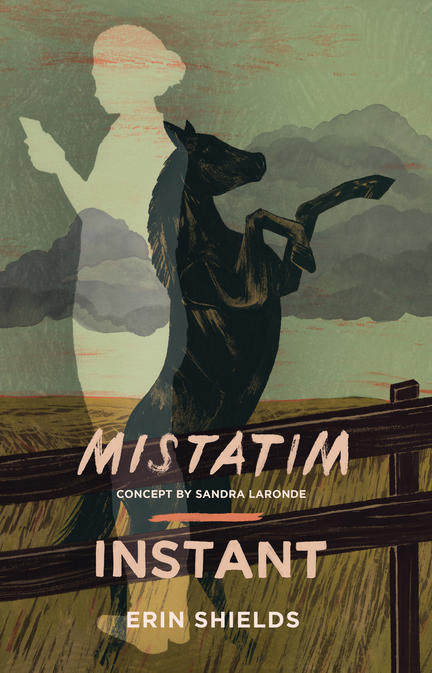 In these two plays for young audiences, award-winning playwright Erin Shields presents the challenges of friendship and communication.

In Mistatim, which is based on a concept from Sandra Laronde of Red Sky Performance, two eleven-year-olds strike up an unlikely friendship at the fence between one’s reserve and the other’s ranch. On Speck’s side, she’s carved names of family members into the wooden posts as she tries to piece together her identity. On Calvin’s side, he’s trying to train a horse in order to prove himself to his father. When Speck realizes she can communicate with Calvin’s horse Mistatim, the pair work to liberate the animal, and in the process learn about one another’s cultures.

In Instant, three teens find out how far they’ll go in their quest to be seen and heard. Meredith is a singer-songwriter who makes YouTube videos of covers in an attempt to gain Internet fame. But her friend Jay, a rising hockey star, can’t understand why she won’t post her original songs. When their classmate Rosie suddenly goes viral after a video is posted of her singing to raise money for her father’s medical bills, Meredith’s jealousy takes over and she pushes Rosie too far, triggering a near-deadly response.

Sandra Laronde hails from the Teme-Augama-Anishnaabe (People of the Deep Water) in Temagami, Ontario, and resides in Toronto. As the founder and artistic producer of Native Women in the Arts, Sandra works as an actor, dancer and writer. She is a founding artistic director of Red Sky Performance. She has written for CBC Radio and is a play creator in residence at Canadian Stage.Sandraâ??s writing appears in Cultures in Transition (McGraw-Hill), Chinook Winds (Banff Centre Press), Gatherings (Theytus Books) and Crisp Blue Edges (Theytus Books). She is a co-editor of My Home As I Remember and Sweetgrass Grows All Around Her, both published by Native Women in the Arts. Sky Woman: Indigenous Women Who Have Shaped, Moved or Inspired Us is her first book with Theytus.

“[Instant is] an important, perceptive play for our times.” —Lynn Slotkin, Intermission

Other titles by Sandra Laronde

She Holds Up the Stars

Indigenous Women Who Have Shaped, Moved, or Inspired Us.

My Home As I Remember