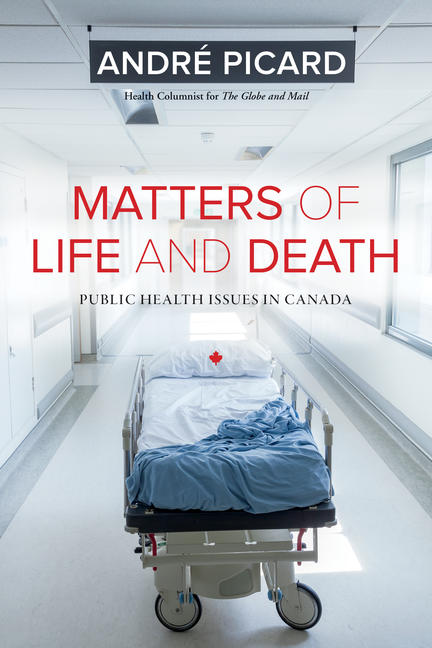 Health issues have long occupied top headlines in Canadian media, and no journalist has written on public health with more authority or for as many years as André Picard. Matters of Life and Death collects Picard's most compelling columns, covering a broad range of topics including Canada's right-to-die law, the true risks of the Zika virus, the financial challenges of a publicly funded health system, appalling health conditions in First Nations communities, the legalization of marijuana, the social and economic impacts of mental illness, and the healthcare challenges facing transgender people.

The topic of health touches on the heart of society, intersecting with many aspects of private and public life—human rights, aging, political debate, economics and death. With his reporting, Picard demonstrates the connection between physical health and the health of society as a whole, provides the facts to help readers make knowledgeable health choices, and acts as a devoted advocate for those whose circumstances bar them from receiving the care they need.

Providing an antidote to widespread fear-mongering and misinformation, Matters of Life and Death is essential reading for anyone with an investment in public health topics—in other words, everyone.

André Picard is the health columnist at The Globe and Mail and one of Canada’s top public policy writers. He is also the author of the best-selling books THE PATH TO HEALTH CARE REFORM: Policies and Politics, CRITICAL CARE: Canadian Nurses Speak For Change; The Gift of Death: Confronting Canada’s Tainted Blood Tragedy and; A CALL TO ALMS: The New Face of Charity in Canada. His latest book is MATTERS OF LIFE AND DEATH: Public Health Issues in Canada.

André has received much acclaim for his writing, including the Michener Award for Meritorious Public Service Journalism, the Canadian Policy Research Award, and the Atkinson Fellowship for Public Policy Research. In 2002, he received the Centennial Prize of the Pan-American Health Organization as the top public health reporter in the Americas. In 2005, he was named Canada’s first Public Health Hero by the Canadian Public Health Association, and in 2007 he was honoured as a Champion of Mental Health. His advocacy work has been honoured by a number of consumer health groups, including Safe Kids Canada, the Canadian Mental Health Association, the Canadian Alliance on Mental Illness and the Canadian Hearing Society.

Other titles by André Picard

The Gift of Death