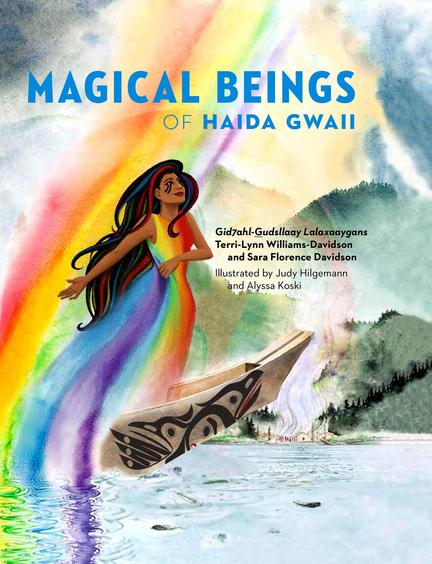 Based on ancient Haida narratives, this vibrantly illustrated children's book empowers young people and teaches them to live in harmony with nature.

Haida Gwaii is home to a rich and vibrant culture whose origins date back thousands of years. Today, the Haida People are known throughout Canada and the world for their artistic achievements, their commitment to social justice and environmental protection, and their deep connection to the natural world. Embedded in Haida culture and drawn from ancient oral narratives are a number of Supernatural Beings, many of them female, who embody these connections to the land, the sea, and the sky. Magical Beings of Haida Gwaii features ten of these ancient figures and presents them to children as visually engaging, empowering, and meaningful examples of living in balance with nature. Developed by renowned Haida activist, lawyer, performer, and artist Terri-Lynn Williams-Davidson and Haida educator Sara Florence Davidson, this book challenges stereotypes, helps advance reconciliation, and celebrates Indigenous identity and culture.

Terri-Lynn Williams-Davidson is an activist through art and music, and also through law. Born in Haida Gwaii, Terri-Lynn has been a promoter of Haida music and culture since the age of thirteen. Since 1995, she has successfully represented the Haida Nation at all levels of court, including the Supreme Court of Canada. In 2014, she received the West Coast Environmental Law People's Choice Andrew Thompson Award for environmental advocacy. In 2000, she founded the Haida Gwaii Singers Society with other veteran Haida singers including her husband, artist Robert Davidson. For her music, she has received multiple Canadian Aboriginal Music Awards and several nominations for Aboriginal People’s Choice Awards, Canadian Folk Music Awards, a Western Canadian Music Award, and Native American Music Awards. An effective advocate, she integrates cultural knowledge and an Indigenous voice into her legal work. For more information, visit ravencallingproductions.ca./p

Sara Florence Davidson (she/her/hers) is a Haida/Settler Assistant Professor in Indigenous Education in the Faculty of Education at Simon Fraser University. Previously, she was an educator working with adolescents in the K-12 system in British Columbia and Yukon Territory. Sara is the co-author of Potlatch as Pedagogy: Learning through Ceremony­, which she wrote with her father, and Magical Beings of Haida Gwaii, which she wrote with her stepmother, Terri-Lynn Williams-Davidson.

When she is not reading or writing, Sara can be found walking with her dog, drinking tea, or listening to stories and learning something new.

“Magical Beings of Haida Gwaii is a gentle, powerful collection of words and pictures, stories that hold knowledge, teachings, and traditions for the generations of today and the future. A must-read for those who live on the beautiful island of Haida Gwaii, and any Canadian who wants to learn about one of the many vital Indigenous cultures across Turtle Island.”

David A. Robertson, winner of the Governor General’s award for When We Were Alone

“Magical Beings of Haida Gwaii is an enchanting book born of a close relationship and understanding of how we see the world from an Indigenous perspective. There is an intrinsic value to stories recorded from the most natural of primary sources, our families. Terri-Lynn and Sara Davidson have given us a lesson on how to value our Indigenous magical beings as we all have them.”

“The Supernaturals, the Magical Beings, have been here since the beginning of time and they are still here. With this book, children can become familiar with the Supernaturals so that they can become part of our natural ways again, as it was with our grandparents.”

“An absolute treasure and honouring for the Haida People and for Haida Gwaii, and a marvel of devotion for the world to learn from. Oh I love this book so much! I am in awe of Magical Beings of Haida Gwaii. Every Nation deserves a book as gorgeous and as healing as this one.”

“This book is both gorgeous and profound. A true masterpiece.”