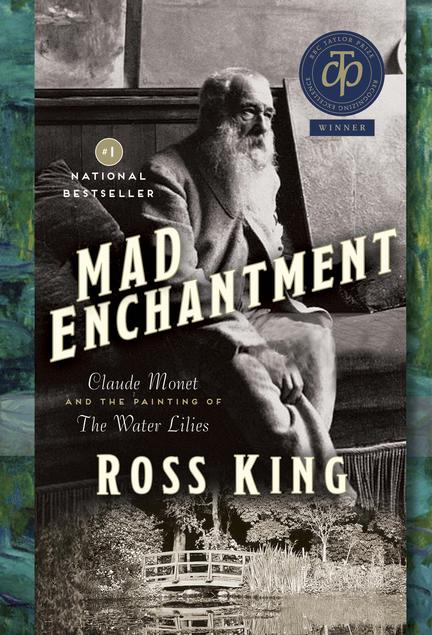 Claude Monet's water lily paintings are a legend renowned the world over, but the dramatic story of the artist behind the art remains mostly unknown. Telling that story is the acclaimed historian, Ross King, as he paints the most nuanced, riveting and humane portrait yet of Claude Monet, arguably the most famous artist of the 20th century.

As World War I exploded in the distance of Giverny, Monet was facing his own personal crucible. At seventy-one, he was grieving the death of his wife, Alice, in 1911. A year later he began going blind. Then, his eldest son, Jean, fell ill and died of syphilis, and his other son was sent to the front to fight for France. Within months, a violent storm destroyed much of the garden that had been his inspiration for some twenty years. At the same time, his reputation was under attack as a new generation of artists, led by Pablo Picasso and Henri Matisse, were dazzling the art world and expressing disgust with Impressionism. Against all this, fighting his own self-doubt, depression and age, Monet found the wherewithal to construct a massive new studio—seventy feet long and fifty feet high—to accommodate the gigantic canvases that would, he hoped, revive him.

Using letters, memoirs and other sources not employed by other biographers, and focusing on this remarkable period in the artist's life, Ross King reveals a more complex, more human, more intimate Claude Monet than has ever been portrayed, and firmly places his water lily project among the greatest achievements in the history of art.

Ross King, born in Estevan, Saskatchewan, is the Canadian author of three books on Italian history and Art: Michelangelo and the Pope's Ceiling, Machiavelli: Philosopher of Power and Brunelleschi's Dome: How a Renaissance Genius Reinvented Architecture, which won the 2001 Book Sense Book of the Year Award for Adult Nonfiction. His study of French Impressionism, The Judgment of Paris, won the Governor General's Award for Non-Fiction in Canada. He lives in England, near Oxford.

Excerpt: Mad Enchantment: Claude Monet and the Painting of the Water Lilies (by (author) Ross King)

NATIONAL BESTSELLER
WINNER OF THE RBC TAYLOR PRIZE FOR LITERARY NON-FICTION
FINALIST FOR THE HILARY WESTON WRITERS' TRUST PRIZE FOR NONFICTION
LONGLISTED FOR THE BC NATIONAL AWARD FOR CANADIAN NONFICTION
AN OBSERVER BEST ART BOOK
A BOSTON GLOBE, NATIONAL POST, KIRKUS REVIEWS AND CBC BEST BOOK
"An engaging and authoritative portrait of the aged artist and his travails. . . . The Monet who emerges from King's pages is a sympathetic and vivid character." —The New York Times Book Review

"A well-researched and in-depth account. . . . Readers will come away with an enhanced understanding of Monet's art, about which King is insightful and articulate. And when King animates the colorful politics of Monet's France, the book sparkles." —The Washington Post

"King, an exhaustive researcher and a pleasing writer, has produced a perceptive chronicle of war and friendship, shifting tastes and lasting art—and of the painted reflections of a pond that became a mirror." —Associated Press

"Mr. King's portrait of Monet—as driven, largely generous, sometimes petulant, never quite cruel—is finely balanced. . . . Mad Enchantment . . . [celebrates] the Impressionist movement." —The Wall Street Journal
"King consummately meshes biography with art history as he turns the creation of one resounding masterpiece into a portal onto the artist's life. . . . Never before has the full drama and significance of Monet's magnificent Water Lilies been conveyed with such knowledge and perception, empathy and wonder." —Booklist (starred review)

"King is ever the brilliant docent murmuring the right, telling details and critical backstories in our ear as we move through space and time. He ultimately brings the man and his work into perfect focus while increasing his audience's interest in both all the more. . . . This work is essential." —Library Journal (starred review)

"King elegantly reveals the soul of a great artist, the last Impressionist standing at the end of one of history’s most remarkable art movements.” —Kirkus Reviews (starred review)

"Canadian art historian and two-time Governor General's Literary Award winner Ross King turns his finely honed gaze to . . . Monet's greatest accomplishment . . . [providing] much historical context and just enough art history to render Monet's story accessible to those with little familiarity with the master beyond recognizing some of his better-known paintings." —Quill & Quire
"With impressive deft, King weaves into his narrative the story of the rise, fall, then rise again of Impressionism's reputation, as well as the fate of the Orangerie, the final resting place of Monet's Grande Décoration in Paris." —Maclean's

"The fascination of this lively and entertaining book lies as much in its portrait of first-world-war France as it does in its depiction of Giverny. [King] does full justice to the artist's evolution from the pure light of his earlier poplars and wheat-stacks to the brooding, unsettling Monet who became a forerunner of Abstract Expressionism; but it is in the period detail and character portraits that Mad Enchantment really comes to life." —The Spectator (UK)

"In this enlightening look at Monet's most famous works, King not only illuminates their beauty but examines the harsh realities during which they were created, from the artist's excruciating eye troubles to the devastation of war." —The Boston Globe
"An exhaustive researcher and a pleasing writer, [King] has produced a perceptive chronicle of war and friendship, shifting tastes and lasting art." —Miami Herald

"Readers interested in the bustling Paris art world of the early 20th century will savour King's glance-back not only at a lost time, but at an extraordinary friendship. But the book, a well-written and meticulously researched account, a labour of love which never seems tedious, should also be of interest to the general reader." —The London Free Press
"Biographer Ross King once again puts a human face on the historical narrative of an artistic triumph. . . . [Monet] described himself as 'at war with nature and time,' and Mad Enchantment captures that war with page-turning intensity." —Christian Science Monitor

"Engrossing history. This scholarly story of Monet's greatest project is told with tremendous humour and is filled with fascinating insights." —History Today

Other titles by Ross King

The Bookseller of Florence

The Story of Painting

How art was made

Their Lives and Works

Score One for the Dancing Girl, and Other Selections from the Kimun ch'onghwa

A Story Collection from Nineteenth-Century Korea

A Geography of Metaphors

The Vatican: All the Paintings

The Complete Collection of Old Masters, Plus More than 300 Sculptures, Maps, Tapestries, and other Artifacts

Leonardo and the Last Supper

The Modernist Revolution of the Group of Seven