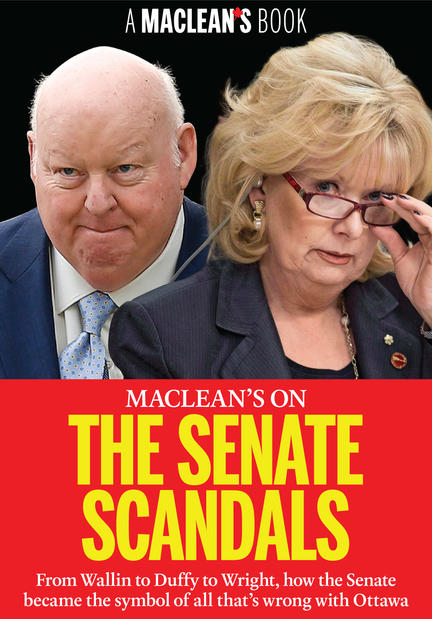 Four senators—the Liberal Mac Harb and a trio that Stephen Harper appointed, Patrick Brazeau, Pamela Wallin and Mike Duffy—have brought more discredit on the Senate than five generations of critics could manage from without. Maclean's on the Senate Scandals brings together for the first time exclusive stories and columns from veteran Ottawa analysts John Geddes, Paul Wells and Aaron Wherry to our finest satirist, Scott Feschuk. As well, senior reporters Anne Kingston and Jonathon Gatehouse have written definitive portraits of Pamela Wallin and Mike Duffy, documenting exactly how it is that two such highly regarded public figures have become symbols of all that's wrong with the Senate and with Ottawa.

Scott Feschuk is the author of two previous books, Searching For Michael Jackson's Nose (McClelland Stewart, 2003) and How Not to Completely Suck as a New Parent (McClelland Stewart, 2004, with Paul Mather). He is the two-time winner of the Gold Award for Humour at the National Magazine Awards and has written for Maclean's, Sportsnet, the Globe and Mail, National Post and This Hour Has 22 Minutes. Feschuk was also chief speechwriter for former Prime Minister Paul Martin.

Jonathon Gatehouse is a senior correspondent for Maclean’s magazine and was formerly a reporter for the National Post and Montreal’s Gazette. He lives in Toronto with his wife and children, plays hockey three times a week, and has a dog named Wendel.

John Geddes is an Ottawa writer and journalist. Born in Shawville, Quebec, he grew up in Cochenour, a small mining town in northern Ontario. He has served as Maclean's magazine's bureau chief on Parliament Hill since 2000, and was a 2003 Nieman Fellow at Harvard University. He lives in Ottawa with his wife and daughter.

ANNE KINGSTON is an award-winning journalist who is currently a columnist for the National Post, where she writes about social and contemporary issues. She is also the bestselling author of The Edible Man: Dave Nichol, President's Choice and the Making of Popular Taste, which won the 1995 Business Book of the Year award.  She has contributed to most major Canadian publications, including The Globe and Mail, Saturday Night and Toronto Life. The Meaning Of Wife has sold internationally and will be published in the U.S. by Farrar, Straus & Giroux in spring 2005. Anne Kingston lives in Toronto.

AARON WHERRY is a senior writer with CBC’s Parliament Hill bureau. Previously an associate editor at Maclean’s, he has spent more than a decade writing about the House of Commons and federal politics, including three federal elections and Justin Trudeau’s rise from backbench curiosity to the twenty-third prime minister of Canada. Before coming to Ottawa, Wherry spent four years at the National Post, working as both a sportswriter and a music critic.

Other titles by Maclean's

Maclean's Guide to Jobs in Canada

Other titles by Colby Cosh

Other titles by Scott Feschuk

Future and Why We Should Avoid It

Killer Robots, The Apocalypse and Other Topics of Mild Concern

The Best of Feschuk

Obsessing Over Sports Since 1967

Feschuk on the Holidays

‘It’s A Wonderful Deal’ and other seasonal classics, hidden messages in Xmas carols, PLUS an exclusive liveblog from Holiday Baby

How Not to Completely Suck as a New Parent

Other titles by Jonathon Gatehouse

His meteoric rise, his challenging first term as president—and the fight of his life, in 2012. Dispatches from Washington

How Gary Bettman Remade The League And Changed The Game Forever

Other titles by John Geddes

Other titles by Anne Kingston

The Meaning Of Wife

Other titles by Paul Wells

Inside the Fight to Remake Canada

Other titles by Aaron Wherry

His meteoric rise, his challenging first term as president—and the fight of his life, in 2012. Dispatches from Washington