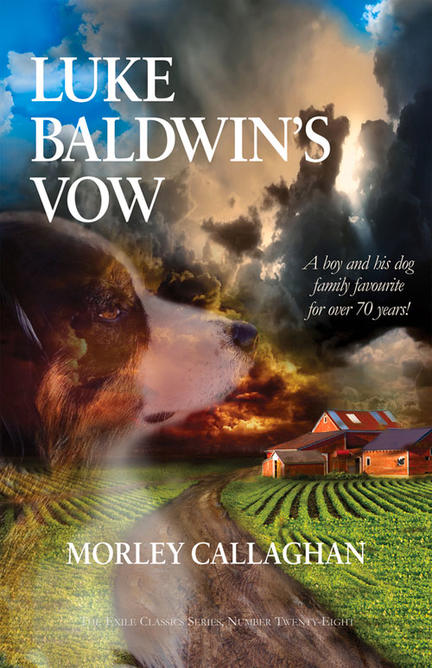 A story of a boy and his dog and their adventures, which will appeal to the many children who are dog lovers. It is also a sensitive story of love and loss, and of making a new life for oneself. Luke is not yet 12 when his father dies of a heart attack, leaving him an orphan. Small for his age and something of a loner, he moves from the city to the country to live with his aunt and uncle. He is naturally homesick and grieving the loss of his father. His well-meaning and kindly aunt and uncle do their best for him; but his only real friend and comfort becomes Dan, the farm’s elderly, one-eyed collie. Practical Uncle Henry considers Dan useless now that he is too old to be a watch-dog and decides that Dan should be “put down.” Luke, whose sense of dignity and loyalty transcend the practical, frantically tries to save Dan’s life, providing for heart-racing suspense as he makes his stand against the expedient world of adults.

Morley Callaghan was the author of fifteen novels, including A Time for Judas, It's Never Over, The Loved and the Lost, and Such Is My Beloved. He was nominated for the Nobel Prize in Literature and received a host of honours in Canada, including the Governor General's Award for Fiction.

“A single vision encompasses these people in all their self-contradictions, betrayals, nobility, bewilderment… every pattern leads out into a larger atmosphere of mercy and wonder.” —Margaret Avison

“The story poses in opposition disinterested love and practical use and teaches how ‘love’ must be flawed by ‘use,’ and how love must be preserved in a world set to destroy it.” —Commonwealth

"Literature I highly recommend it for middle school children, but I would recommend parents read it too, so they can talk about it with the young readers, can explain how things once were with people and pets - and sometimes still are." —Library Thing

Other titles by Morley Callaghan

Such Is My Beloved

The Complete Stories of Morley Callaghan

Ancient Lineage and Other Stories

They Shall Inherit the Earth