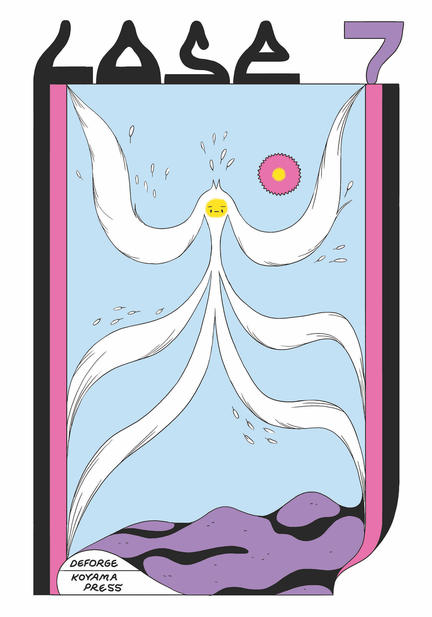 The multi-award winning Lose series is Michael DeForge's comics laboratory. The art form is pushed to its limits in these first-time-in-full-color pages. Revel in a cartoonist at the height of his powers exploring the eccentricities of a woman who befriends her dad's doppelganger, and the realities of a flightless bird/boy hybrid.

Michael DeForgecurrently lives and works in Toronto as a cartoonist, commercial illustrator, and designer for the hit Cartoon Network programAdventure Time. His one-person anthology series Lose has received great critical and commercial success, having been nominated for every major comics award including the Ignatz and Eisner Awards.

Michael DeForge currently lives and works in Toronto as a cartoonist, commercial illustrator, and designer for the hit Cartoon Network program Adventure Time. His one-person anthology series Lose has received great critical and commercial success, having been nominated for every major comics award including the Ignatz and Eisner Awards.

Winner of the 2013 Ignatz Award for Outstanding Series

Winner of the 2013 Ignatz Award for Outstanding Artist

"Lose can be considered a peek into his current aesthetic interests." — Rob Clough,High-Low

"So many of DeForge's stories are about transformation, that it's hard to look at the world around you after reading one of his stories the same way as you did before." — Scott Cederlund,Panel Patter

"DeForge's work is so different from anything else out there that it looks like it was made on another planet. Yet, it's the unexpected humanity—his keen observations and sense of humor—that is embedded in all the weirdness that makes his comics a must-read." — Rich Barrett,mental_floss

"Like the best fairy tales, DeForge uses transformation and strange situations to enter a side door towards human cruelties and tendernesses, betrayals and quiet loyalties, and the confused paths through which we navigate our desires." — Annie Mok,The Comics Journal

"[T]he heart of DeForge's body of work is in the struggle of his characters/creatures to evolve—physically, mentally, mystically, metaphorically—into something better positioned to survive the consumptive and uncaring character of nature." — Joe McCulloch,The Comics Journal

"Michael DeForge makes the kind of comics that make me a little uncomfortable. Hallucinatory, abstract, and delicately grotesque, he views the peculiarities of human behaviour with an almost anthropological eye, and adapts them into surreal excursions into an extraordinary exploration of the mundane." — John Parker,ComicsAlliance

"This issue continues DeForge's exploration of a world where fantasies can be hauntingly painful and bizarre." — Heidi MacDonald,The Comics Beat

"With DeForge, reality becomes a horror show not of blood and gore but of uncertainty...His stories of changing identity combined his existence-warping artwork make us question our own concept of self." — Scott Cederlund,Panel Patter

"DeForge's comic universe reflects the dark corners of our real one, but — sensitive and hopeful storyteller that he is — he hasn't forgotten about the exuberance, wonder and happiness there either." — Chris Hampton,The Toronto Star

"Toronto's comics arts scene is thriving, and young Michael DeForge, with his penchant for body horror and cute-meets-perverse aesthetic, is at its hub." — Carla Gillis, Glenn Sumi,NOW Magazine

"DeForge's world is not for the squeamish. But it is one whose grotesqueries increasingly mirror, rather than distort, the mundane world with which we think we are familiar." — Sean Rogers,The Globe and Mail

"One of the most exciting and unpredictable cartoonists working in comics, Michael DeForge has a unique perspective that juggles humor, tragedy, whimsy and horror to create unforgettable stories." — Oliver Sava,Los Angeles Times

"Everything and everyone in his [DeForge's] drawings is dripping, bubbling and developing unsightly growths. He warps and dents the assured, geometrical forms of vintage newspaper strips and new wave-era graphics into oddly adorable horrors; his stories are prone to whiplash formal shifts." — Douglas Wolk,The New York Times

"Prolific young Canadian-born avant-garde artist DeForge has become one of his generation's most admired cartoonists, and this is his first sizable collection. While often willfully unsettling, DeForge's work resonates on many levels." —Publishers Weekly (starred review)