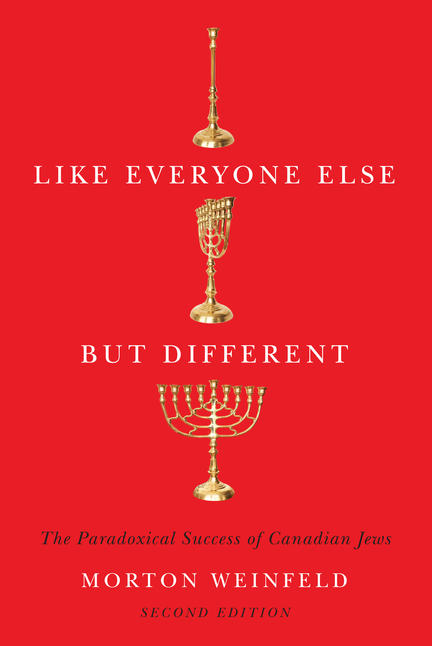 Liberal democratic societies with diverse populations generally offer minorities two usually contradictory objectives: the first is equal integration and participation; the second is an opportunity, within limits, to retain their culture. Yet Canadian Jews are successfully integrated into all domains of Canadian life, while at the same time they also seem able to retain their distinct identities by blending traditional religious values and rituals with contemporary cultural options.

Like Everyone Else but Different illustrates how Canadian Jews have created a space within Canada’s multicultural environment that paradoxically overcomes the potential dangers of assimilation and diversity. At the same time, this comprehensive and data-driven study documents and interprets new trends and challenges including rising rates of intermarriage, newer progressive religious options, finding equal space for women and LGBTQ Jews, tensions between non-Orthodox and Orthodox Jews, and new forms of real and perceived anti-Semitism often related to Israel or Zionism, on campus and elsewhere.

The striking feature of the Canadian Jewish community is its diversity. While this diversity can lead to cases of internal conflict, it also offers opportunities for adaptation and survival. Seventeen years after its first publication, this new edition of Like Everyone Else but Different provides definitive updates that blend research studies, survey and census data, newspaper accounts and articles, and the author’s personal observations and experiences to provide an informative, provocative, and fascinating account of Jewish life and multiculturalism in contemporary Canada.

Morton Weinfeld is professor of sociology and holds the chair in Canadian Ethnic Studies at McGill University.

Other titles by Morton Weinfeld

The Paradoxical Success of Canadian Jews

The Jews in Canada (Kobo)

The Jews in Canada