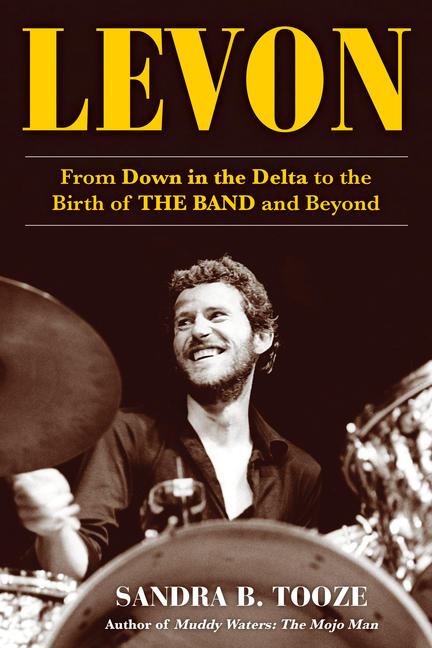 A dazzling, epic biography of Levon Helm––the beloved, legendary drummer and singer of the Band.

He sang the anthems of a generation: "The Weight," "Up on Cripple Creek," and "Life Is a Carnival." Levon Helm's story––told here through sweeping research and interviews with close friends and fellow musicians––is the rollicking story of American popular music itself.

In the Arkansas Delta, a young Levon witnessed "blues, country, and gospel hit in a head-on collision," as he put it. The result was rock 'n' roll. As a teenager, he joined the raucous Ronnie Hawkins and the Hawks, then helped merge a hard-driving electric sound with Bob Dylan's folk roots, and revolutionized American rock with the Band. Helm not only provided perfect "in the pocket" rhythm and unforgettable vocals, he was the Band's soul.

Levon traces a rebellious life on the road, from being booed with Bob Dylan to the creative cauldron of Big Pink, the Woodstock Festival, world tours, The Last Waltz, and beyond with the man Dylan called "one of the last true great spirits of my or any other generation."

Author Sandra B. Tooze digs deep into what Helm saw as a devastating betrayal by his closest friend, Band guitarist Robbie Robertson––and Levon's career collapse, his near bankruptcy, and the loss of his voice due to throat cancer in 1997. Yet Helm found success in an acting career that included roles in Coal Miner's Daughter and The Right Stuff. Regaining his singing voice, he made his last decade a triumph, opening his barn to the Midnight Rambles and earning three Grammys. Cancer finally claimed his life in 2012.

Levon is a penetrating, skillfully told tale of a music legend from Southern cotton fields to global limelight.

Sandra B. Tooze garnered world-wide acclaim for her book Muddy Waters: Mojo Man. Eric Clapton wrote the foreword, and Levon Helm and Mick Jagger both endorsed it with back-cover quotes. The reviewer for America’s preeminent blues magazine, Living Blues, called it a “first rate biography. . . . An illumination and a joy, it deserves a place on our shelves as a loving and earnest tribute to one of the greats of American music.” On Britain’s BBC radio, her book was described as “terrific. . . . and absolutely great.” And in the UK’s premier music magazine, Mojo, it was praised as “a vivid, brilliantly researched portrait.”

“Levon Helm put his heart and soul into every beat he played, every song he sang. He brought joy to people all over the world by sharing the unique blend of musical styles he grew up with in the Arkansas Delta. Along the way, he became a good actor, too! I’m glad his story is getting the telling it deserves.”

“I was honored to have performed with Levon Helm, a master musician who tapped into an astonishing array of genres within American music and possessed one of its greatest voices. In this captivating biography, Sandra B. Tooze channels the creativity, drive, and endurance of this iconic artist. Filled with fresh insights and anecdotes, Levon is a fascinating exploration of the man, his music, and his life.”

“This is a book about one of the great characters I have ever been privileged to know. Levon Helm was a brilliant actor, a wildly gifted musician, a hilarious and charming raconteur and, like me, an Arkansan with a mama named Nell. This book beautifully celebrates his exuberant and remarkable life.”

“Sandra B. Tooze succeeds in reinforcing all the threads that make up the tapestry of the late drummer’s creative life, even adding some previously unknown and forgotten periods to the record…. At the same time, his triumphs are rendered with a sensitivity and detail rare in rock biographies. Levon receives the attention here that his profound contribution to American-roots music deserves…. This is an essential read for fans of the Band and beyond.”

“Sandra Tooze has not only written the definitive biography of Levon Helm, but she’s also written an outstanding life-story of modern American music, encompassing all of the colorful characters that Levon Helm met along the way. Levon embodied the evolution of blues, rockabilly, country and folk that meant so much to so many, defined the soundtrack of my life, and inspired a generation. Levon Helm was a musician’s musician. This book is a must-read musical odyssey of a true hero of rock and roll.”

“All true fans of Americana know that the late Levon Helm was a masterful drummer and one of our most distinctive singers. But author Sandra B. Tooze offers a brilliant road map covering how he became one of the towering figures in 20th century music. Ride shotgun as she follows Helm’s wild exploits—from early Sixties cult hero with the Hawks to playing stadiums with Bob Dylan and the Band. This is the story of rock and roll.”

—Brad Tolinski, author of Play It Loud: An Epic History of the Style, Sound and Revolution of the Electric Guitar and Light & Shade: Conversations with Jimmy Page

“Tooze keeps a steady beat in [this] chronicle of the life of Band musician Levon Helm (1940–2012). Drawing on interviews with Helms’s . . . close friends, and his music director Larry Campbell, Tooze traces Helm’s life from his Arkansas childhood where he grew up listening to soul, country, blues, and gospel on the radio . . . [and] the rapid rise to fame of the Band through perceptive and judicious summaries of each of the group’s albums…. [A] well-paced history.”

“Sandra B. Tooze succinctly zeroes in on how an untrained Helm developed as a drummer, from his influences to the way ‘he laid down his groove at the far end of the beat’ because that’s how you made the music more danceable…. While there’s plenty in the book for drum enthusiasts, Tooze doesn’t skimp on the main draw: the years between 1964 and 1977, when Helm and Canadians Robertson, Manuel, Rick Danko, and Garth Hudson set out on their own…. Levon achieves a clear picture of Helm’s magnetic personality with very little editorializing and no sycophancy. And despite more than a few unsavory stories of Helm’s drug use and treatment of women, he remains the definition of generosity and warmth.”

“Levon Helm went from Turkey Scratch, Arkansas, to Bob Dylan’s first electric tour, Woodstock, and the Last Waltz. And that’s only scratching the surface of where author Sandra Tooze takes us as she deftly tells the story of a modern music icon. Levon brilliantly puts readers behind the scenes of many of the most important moments in rock ‘n’ roll history with a man whose influence on them was immense.”

?John Glatt, author of Live at the Fillmore East and West: Getting Backstage and Personal with Rock's Greatest Legends

“I thought I knew a lot about my old friend Levon Helm, but Sandra Tooze has captured all the nitty-gritty details of the life and times of the man who was, arguably, the most soulful and beloved drummer/singer in the history of rock ‘n’ roll. From Turkey Scratch, Arkansas, to Woodstock, New York, this rollicking, raunchy, riveting account of Levon’s life and times takes us on a wild journey that is exhilarating and heartbreaking in equal measure.”

"The Band’s drummer Levon Helm always insisted he had 'the best seat in the house' and his views from that perch are recounted here. Tooze is a no-frills scribe—she’s done her homework and she straightforwardly tells Helm’s story. Kicking off with a vivid description of his youth, she reminds us that he came from the South that he brought to life in song."

"Tooze successfully captures Helm’s spirit, his relentless creativity, and his enduring love of playing and singing music. . . . Drawing on interviews with Helm’s daughter, Amy Helm, close friends, and his music director, Larry Campbell, among many others, Tooze traces Helm’s life from his Arkansas childhood, where he grew up listening to soul, country, blues, and gospel on the radio. . . . [Levon] gives us a chance to revisit Helm’s music and to recall his deep contributions to roots music. Most of all, it captures Helm’s personality."

"[Pulling] no punches, Sandra Tooze’s Levon is a love letter to one of the signature drummers and dynamic vocalists in rock history. . . . Not forgetting what is important, Tooze fills the book with observations and firsthand accounts of what made Helm worth writing and reading about, pointedly his preternatural musical talents that he never abandoned and continued to celebrate until his last breath."

"Tooze brings to the table an impressive heap of research [and] a sure grasp of Helm’s musical accomplishments . . . [Tooze] is particularly good on Helm’s childhood. . . . [O]ne of the great virtues of Tooze’s book [is that] she reminds us of the richness of Helm’s post-Band existence."