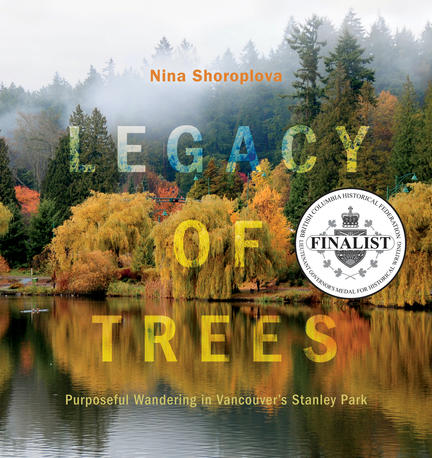 An engaging, informative, and visually stunning tour of the numerous native, introduced, and ornamental tree species found in Vancouver’s Stanley Park, combining a wealth of botanical knowledge with a fascinating social history of the city’s most celebrated landmark.

Measuring 405 hectares (1,001 acres) in the heart of downtown Vancouver, Stanley Park is home to more than 180,000 trees. Ranging from centuries-old Douglas firs to ornamental Japanese cherry trees, the trees of Stanley Park have come to symbolize the ancient roots and diverse nature of the city itself.

For years, Nina Shoroplova has wandered through Vancouver’s urban forest and marvelled at the multitude of tree species that flourish there. In Legacy of Trees, Shoroplova tours Stanley Park’s seawall and beaches, wetlands and trails, pathways and lawns in every season and every type of weather, revealing the history and botanical properties of each tree species.

Unlike many urban parks, which are entirely cultivated, the area now called Stanley Park was an ancient forest before Canada’s third-largest city grew around it. Tracing the park’s Indigenous roots through its colonial history to its present incarnation as the jewel of Vancouver, visited by eight million locals and tourists annually, Legacy of Trees is a beautiful tribute to the trees that shape Stanley Park’s evolving narrative.

Nina Shoroplova is a historian, researcher, photographer, and author. Born and raised in Wales, she immigrated to Canada in 1969 and settled for a time at the Douglas Lake Ranch, the subject of her first book, Cattle Ranch: The Story of the Douglas Lake Cattle Company. An avid walker, amateur botanist, and tree enthusiast, she lives three blocks away from Vancouver’s world-famous Stanley Park.

“Shoroplova gives us more than an exhaustive guide to the myriad trees of Stanley Park—Legacy of Trees is also a fascinating answer to why we should care about trees in the first place." -Wayne Grady, author of Tree: A Life Story (with David Suzuki) and of The Great Lakes: A Natural History.