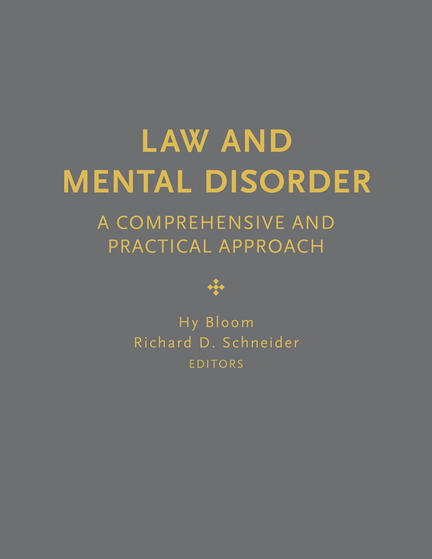 Law and Mental Disorder: A Comprehensive and Practical Approach is an encyclopedic medico-legal overview of forensics issues. With 60 chapters, and over 50 contributors, the topics range from an introduction to the legal system for psychiatrists, to pharmacological treatments for sex offenders, to the pathways to conduct disorder amongst children. The book has been written for a professional audience of psychiatrists, resident psychiatrists, and related heath professionals as well as legal professionals (judges, lawyers), and justice system professionals.

Hy Bloom, BA, LL.B., MD, FRCP(C) is a director of workplace.calm, inc., consultants in Workplace Conflict and Violence Prevention and Management, and is the Managing Associate of the Central Branch of the PSILEX Group, Consultants in Behavioural Sciences and the Law. He is also a part-time staff member of the Law and Mental Health Program at the Centre for Addiction and Mental Health (CAMH), an Assistant Professor in the Department of Medicine at the University of Toronto, and an Assistant Clinical Professor in the Department of Psychiatry at McMaster University. Dr. Bloom received his LL.B. from McGill University in 1978, and his MD from McMaster University in 1984. He was called to the Bar of Ontario in 1980. He has published on a number of topics in psychiatry and the law. He has co-authored one book, Defending Mentally Disordered Persons (Toronto: Carswell, 1995), and co-edited a book, entitled A Practical Guide to Mental Health Capacity and Consent Law of Ontario (Toronto: Carswell, 1996). Dr. Bloom has served as a psychiatric consultant to a number of public and private sector organizations on the subject of workplace conflict and violence, and has lectured and written on the topic.

The Honourable Mr. Justice Richard D. Schneider, BSc, MA, PhD, LLB, LLM, CPsych, is a Justice of the Ontario Court of Justice, Deputy Judge of the Territorial Court of Yukon, Chair of the Ontario Review Board, and Alternate Chair of the Nunavut Review Board. He was previously a criminal defence lawyer and certified clinical psychologist. He was counsel to the Ontario Review Board from 1994 to 2000 and was certified by the Law Society of Upper Canada as a specialist in criminal litigation. Justice Schneider is also an Adjunct Professor, Department of Psychiatry, Faculty of Medicine and Faculty of Law at the University of Toronto; a “Specially Appointed Researcher” at the China University of Political Science and Law Criminal Psychology Research Centre. He was named Honorary President of the Canadian Psychological Association in 2002. Justice Schneider’s private practice was generally limited to the representation of mentally disordered accused, and a great deal of his time has been spent presiding at the Mental Health Court in Toronto. His major research interests are competency and criminal responsibility, and he has published extensively in the area of mental disorder and the law. Recent books include Mental Health Courts: Decriminalizing the Mentally Ill (2007, with H. Bloom & M. Heerema); Annotated Ontario Mental Health Statutes, 4th ed (2007); The Lunatic and the Lords (2009); Law and Mental Disorder: A Comprehensive and Practical Approach (2013, with H. Bloom); Mental Disorder and the Law: A Primer for Legal and Mental Health Professionals, 2d ed (2017, with H. Bloom); Fitness to Stand Trial: Fairness First and Foremost (2018, with H. Bloom); and The Death of a Butterfly: Mental Health Court Diaries (2019) (all published by Irwin Law/Delve Books).

Other titles by Hy Bloom

The Lawyer's Guide to the Forensic Sciences

Mental Disorder and the Law

A Primer for Legal and Mental Health Professionals

Other titles by Richard D. Schneider

The Lawyer's Guide to the Forensic Sciences

The Lunatic and the Lords

Mental Disorder and the Law

A Primer for Legal and Mental Health Professionals