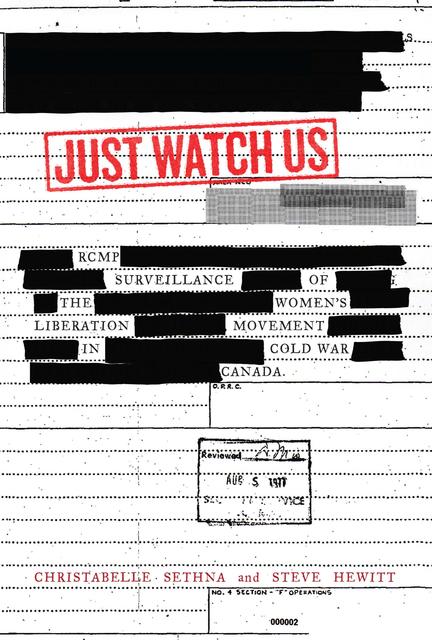 From the late 1960s to the mid-1980s, in the midst of the Cold War and second-wave feminism, the RCMP security service – prompted by fears of left-wing and communist subversion – monitored and infiltrated the women’s liberation movement in Canada and Quebec. Just Watch Us investigates why and how this movement was targeted, weighing carefully the presumed threat its left-wing ties presented to the Canadian government against the defiant challenge its campaign for gender equality posed to Canadian society.

Based on a close reading of thousands of pages of RCMP documents declassified under Canada’s Access to Information Act and the corresponding Privacy Act, Just Watch Us demonstrates that the security service’s longstanding anti-Communist focus distorted its threat assessment of feminist organizing. Combining gender analysis and critical approaches to state surveillance, Christabelle Sethna and Steve Hewitt consider the machinations of the RCMP, including its bureaucratic evolution, intelligence-gathering operations, and impact, as well as the evolution of the women’s liberation movement from its broad transnational influences to its elusive quest for unity among women across lines of ideology and identity. Significantly, the authors also grapple with the historiographical, methodological, and ethical difficulties of working with declassified security documents and sensitive information.

A sharp-eyed inquiry into spy policies and tactics in Cold War Canada, Just Watch Us speaks to the serious political implications of state surveillance for social justice activism in liberal democracies.

Christabelle Sethna is a professor in the University of Ottawa's Institute of Feminist and Gender Studies. She is the coauthor of Just Watch Us: RCMP Surveillance of the Women's Liberation Movement in Cold War Canada and a coeditor of Animal Metropolis: Histories of Human-Animal Relations in Urban Canada.

STEVE HEWITT was born and raised in Southern Ontario. He is the author of Spying 101: The RCMP's Secret Activities at Canadian Universities, 1917-1997 and is a member of the Department of American and Canadian Studies at the University of Birmingham in the United Kingdom.

Other titles by Christabelle Sethna

No Place for the State

The Origins and Legacies of the 1969 Omnibus Bill

Histories of Human-Animal Relations in Canada

Other titles by Steve Hewitt

Riding to the Rescue

The Transformation of the RCMP in Alberta and Saskatchewan, 1914-1939

Canada and the Cold War