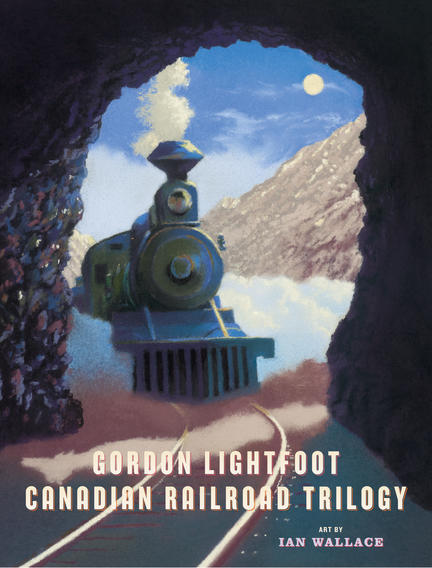 The song was commissioned by the CBC in 1967 to mark Canada's centennial year and it has been a classic ever since. It eloquently describes the construction of the Canadian Pacific Railway -- "an iron road runnin' from the sea to the sea" -- a great feat of nation building that changed Canada forever for good and for ill, as in the process many people died and were dispossessed of their land.

Highly acclaimed, award-winning illustrator Ian Wallace brings the song to visual life with his sweeping landscapes and evocative portrayals of the people who lived the building of the railroad -- from the financiers in the east to First Nations people across the country to the thousands of navvies themselves, many of whom came from as far away as China.

GORDON LIGHTFOOT, Canada's most famous folk singer, songwriter and guitarist, received international acclaim with songs such as "The Wreck of the Edmund Fitzgerald" and "If You Could Read My Mind." A great number of his songs have been recorded by well-known artists. He has won many awards, including seventeen Junos and the Governor General's Award, and he has been nominated for five Grammys. He is a Companion of the Order of Canada, the country's highest civilian honor, and a member of the Order of Ontario, the Canadian Broadcast Hall of Fame, the Canadian Country Music Hall of Fame and the Canadian Songwriters Hall of Fame. He lives in Toronto, Ontario.

Wallace lovingly recreates the country from coast to coast. From sketches of the mountains to the Prairies to the Maritimes, the book could almost be used as a tourist brochure.

...certain to inspire discussions between older readers and younger listeners about how Canada came to be.

In this marvellous and yes, iconic, book, Wallace succeeds in both honouring Lightfoot's song and replaying it in a most original way.

Although some paintings show the railway in detail, it's less a book about railroads than it is about the history and settlement of Canada itself....a huge and unusual project, and Wallace has executed it with admirable care.

...generate[s] an interesting discussion with young learners about how railroad construction has contributed to economic development through the movement of people, goods, and even information across long distances.

This volume would be a perfect addition to a unit on Canadian history or the building of the railway for any age group...Well worthwhile for all Canadian school libraries!

The atmospheric illustrations ... capture not only the workers’ toil but also the splendor of the Canadian landscape and, obliquely, the price the displaced First Nations people paid for steam-train technology.

I don't know of another more skilled Illustrator who could have done justice to these amazing words than award-winning illustrator Ian Wallace. The visuals are just jaw-dropping spectacular!...Highly recommended.

This lavishly illustrated book brings Gordon Lightfoot’s heart-stirring song “Canadian Railroad Trilogy” to readers young and old...Ian Wallace brings to the song visual life with his sweeping landscapes and evocative portrayals of the people who lived the building of the railroad.

Other titles by Gordon Lightfoot

A Tailored History of Toronto