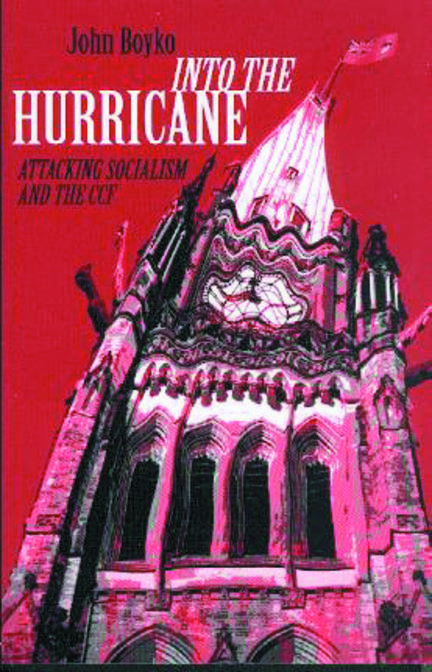 Born in the prairies, from the ravages of the Depression, the Cooperative Commonwealth Federation was a new political party that offered a socialist vision and idealistic belief that Canada could rebuild itself to become better and more fair than ever before. The CCF grew to the point that, by 1943, a national poll found that it was Canada's most popular party. But it's success bred fear among those on the political right, including Big Business, the progressive Conservative Party, and religious leaders who all created an anti-Socialist, anti-CCF campaign that ruthlessly sought to destroy the idea and the party. That campaign was joined and exploited by the Communist and Liberal Parties that attacked from the left. The attacks created a hurricane, which, by 1949, had damaged Canadian socialism and the CCF to the point where prospects for electoral success waned and seemed to die. Into the Hurricane invites Canadians to consider how their political opinions and options are manipulated now by considering how they were manipulated then. As Canadians fight for the future of health care, public education, and social programs that have become woven into the fabric of our political culture, when CCF leader Tommy Douglas is lauded as the Greatest Canadian, the book asks Canadians to consider the hurricane that destroyed the party that was attempting to bring forward ideas so many now consider our birthright.

John Boyko has earned degrees from McMaster, Queen's, and Trent universities. Bennett is his fourth book addressing Canadian history and politics. Reviews of this biography of Bennett, praise him for his "encyclopaedic knowledge of Canadian history," his "engaging style," and his ability to "make the most arid political debate interesting." He has written a bi-weekly newspaper column and a number of op. ed. articles, has spoken throughout the country, and appeared on regional and national radio and television programs. He has been elected to municipal council and served on a number of boards. John Boyko is also an educator. He is the Director of Entrepreneurial Programs and Northcote Campus at Lakefield College School. He lives in Lakefield, Ontario.

Other titles by John Boyko

How Canada Fought the Vietnam War

The Voice for a Stronger Canada

How Canada Fought the American Civil War and Forged a Nation

The Rebel Who Challenged and Changed a Nation

The Evolution of Canadian Racism