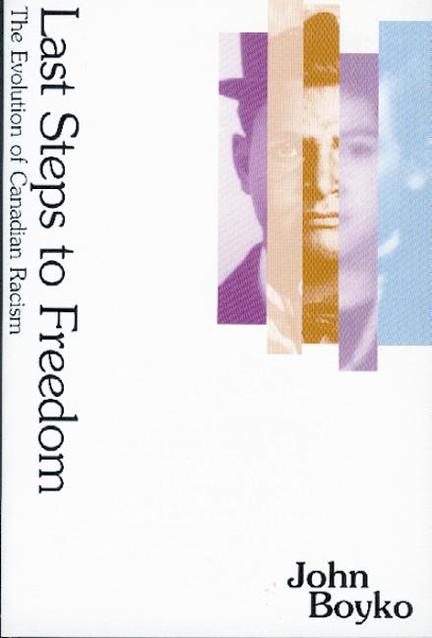 To understand Canada one must understand racism, for Canada was born and grew as a racist state. Race riots, segregated schools, racially-based union membership, mass deportations of innocent people, the state sanctioned kidnapping of children, a conscious attempt at cultural genocide and much more have shaped Canada's history. Last Steps to Freedom: The Evolution of Canadian Racism encourages Canadians to look truthfully at their past, admit mistakes, atone for crimes and applaud progress. The book is organized chronologically, by region, and by ethnic group. It traces the experiences of Chinese, Ukranian, Jewish, Japanese, Black, and Native Canadians. In each case, early activities and contributions by groups and individuals are explored. People mysteriously absent from our history books such as Viola Desmond, Big Bear, Ivan Pylipiw, and others are celebrated. The systemic racism against which they struggled is explained.

John Boyko has earned degrees from McMaster, Queen's, and Trent universities. Bennett is his fourth book addressing Canadian history and politics. Reviews of this biography of Bennett, praise him for his "encyclopaedic knowledge of Canadian history," his "engaging style," and his ability to "make the most arid political debate interesting." He has written a bi-weekly newspaper column and a number of op. ed. articles, has spoken throughout the country, and appeared on regional and national radio and television programs. He has been elected to municipal council and served on a number of boards. John Boyko is also an educator. He is the Director of Entrepreneurial Programs and Northcote Campus at Lakefield College School. He lives in Lakefield, Ontario.