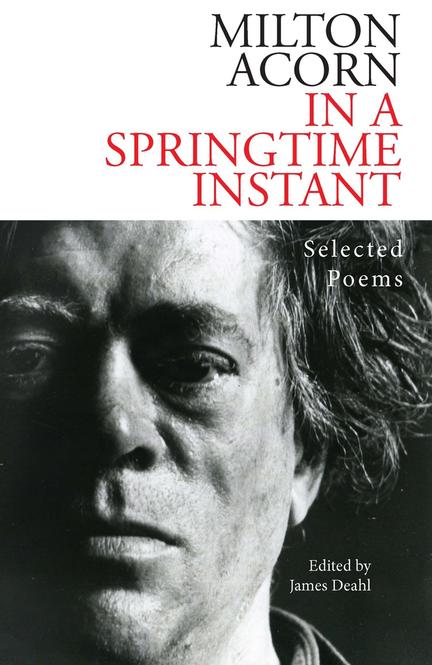 Milton Acorn remains one of the most important Canadian poets of the 20th century. This new volume of his Selected Poems solidifies Acorn’s reputation and confirms his place in Canadian literature. As James Deahl, the editor asserts in his Introduction, “Milton Acorn’s poetry stands among the most challenging work produced during the last half of the twentieth century. His ability to see connections between a strange assortment of things is striking. And the reader is called up to be as agile as the poet in jumping from one idea to another.”

IN A SPRINGTIME INSTANT: SELECTED POEMS OF MILTON ACORN the reader will discover and appreciate all the diversity, passion, variety, contradictions that swept through Acorn’s life and his poetry.

Widely acknowledged to be Prince Edward Islands greatest poet, Milton Acorn was born in Charlottetown in 1923 and died there in 1986. A significant contributor to the Canadian literary scene of the 1950s, 1960s and 1970s, he counted Al Purdy, Eli Mandel, Leonard Cohen, Irving Layton and Patrick Lane among his friends. The original Peoples Poet, Acorn received a medal and cash prize from his peers at Torontos Grossmans Tavern in 1970 when his selected poems, Ive Tasted My Blood, failed to win the Governor Generals Award. He went on to receive Canadas highest literary honour for The Island Means Minago, published in 1975. Acorn was the author of ten books of poetry, and, with Cedric Smith, he co-authored the play, The Road to Charlottetown. Although he lived in various Canadian cities between 1951 and 1981, Acorns finely tuned homing instincts always brought him back to the Island.

James Deahl was born in Pittsburgh in 1945, and grew up in that city as well as in and around the Laurel Highlands of the Appalachian Mountains. He moved to Canada in 1970 and holds Canadian citizenship. He’s the author (or, in the case of Tu Fu’s poetry, translator) of twenty literary titles. His most recent books are North of Belleville and Opening The Stone Heart. A cycle of his poems is the focus of a one-hour TV special, Under the Watchful Eye. Both the video and an audiotape have been reissued on CD and DVD by Silver Falls Video. In addition to his writing, he has taught creative writing and Canadian literature at the high school, college, and university levels. He no longer teaches, and for over a dozen years has mostly been a full-time writer/editor/translator. James Deahl lives in Sarnia. He is the father of Sarah, Simone, and Shona.

Other titles by Milton Acorn

No Feather, No Ink

Seasonal Stories and Poems from Canada and Around the World

Other titles by James Deahl

Red Haws to Light the Field

Under the Mulberry Tree

poems for & about Raymond Souster