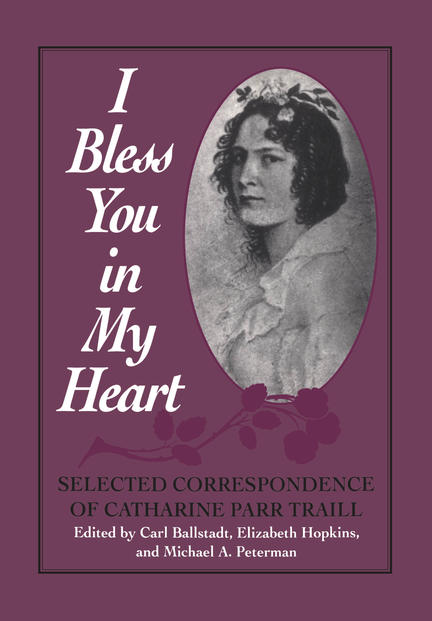 Though her life was largely circumscribed by domesticity and poverty both in England and in Canada, Catharine Parr Traill’s interests, experiences, and contacts were broad and various. Her contribution to our knowledge of nineteenth-century Canadian life, from a literary, historical, and scientific perspective, was significant.

Chosen from her nearly 500 extant letters, the 136 presented here vividly reflect typical aspects of social and family life, attachments to the Old World, health and medical conditions, travel, religious faith and practice, the stresses of settlement in Upper Canada in the 1830s, and the dispersal of families with the opening up of the Canadian and American West.

Spanning seventy years, the letters are presented in three sections, each prefaced by an introductory essay. The first, ‘1830–1859: “The changes and chances of a settler’s life,”’ traces Traill’s story from her emergence as one of the literary Strickland sisters in England, through the difficult, poverty-stricken years of settlement and family raising in Canada, to her husband’s death. The second, ‘1860–1884: “The poor country mouse,”’ reveals her quiet life at Westove (her cottage at Lakefield), her devotion to family and friends, and the time she spent writing botanical essays and seeking a publisher for them. A trip to Ottawa in 1884 awakened her to a recognition of the literary stature she had earned. The third section, ‘1885–1899: “The sight of green things is life to me,”’ begins with the publication of her Studies of Plant Life in Canada and sheds light on the public recognition she received, her continuing literary productivity, and the strengthening of her role as matriarch of the Strickland family in Canada. It closes with her death on 29 August 1899.

Together with the introductory essays, Traill’s correspondence offers an intimate and revealing portrait of a courageous, caring, and remarkable woman—mother, pioneer, writer, and botanist.

Carl Ballstadt is a member of the Department of English at McMaster University.

Michael Peterman is professor emeritus and past Chairman of the Department of English, Trent University. He is a co-editor of Susanna Moodie: Letters of a Lifetime and Letters of Love and Duty: The Correspondence of Susanna and John Moodie.

Elizabeth Hopkins is a member of the English Department at Glendon College, York University.

Other titles by Carl Ballstadt

Forest and Other Gleanings

Roughing it in the Bush or Life in Canada

Other titles by Michael Peterman

The Lily and the Cross

A Tale of Acadia

Forest and Other Gleanings

Other titles by Elizabeth Hopkins