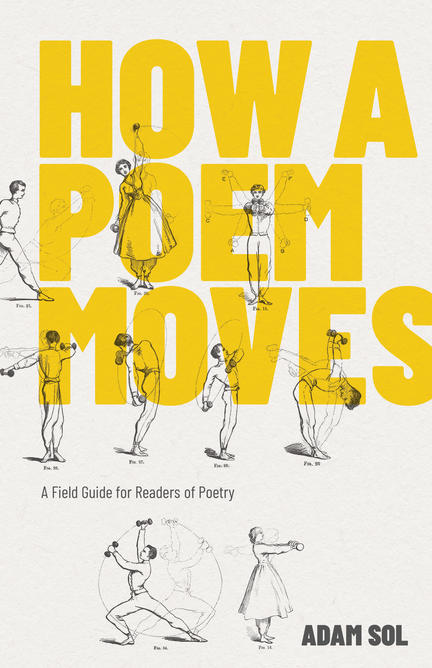 Developed from Adam Sol’s popular blog, How a Poem Moves is a collection of 35 short essays that walks readers through an array of contemporary poems. Sol is a dynamic teacher, and in these essays, he has captured the humor and engaging intelligence for which he is known in the classroom. With a breezy style, Sol delivers essays that are perfect for a quick read or to be grouped together as a curriculum.

Though How a Poem Moves is not a textbook, it demonstrates poetry’s range and pleasures through encounters with individual poems that span traditions, techniques, and ambitions. This illuminating book is for readers who are afraid they “don’t get” poetry but who believe that, with a welcoming guide, they might conquer their fear and cultivate a new appreciation.

Adam Sol has published four collections of poetry, the latest of which, Complicity, was released in 2014. His previous collections include Jeremiah, Ohio, a novel in poems that was shortlisted for the Trillium Award for Poetry; Crowd of Sounds, which won the Trillium Award for Poetry; and Jonah’s Promise. He has published fiction, scholarly essays, and reviews for a variety of publications, including the Globe and Mail, Lemon Hound, and Joyland.com. He teaches at Laurentian University’s campus in Barrie, Ontario, and lives in Toronto with his wife, Rabbi Yael Splansky and their three sons.

“This unassuming book provides a great public service — it removes the shroud of mystery that hovers between too many readers and the world of poetry … Sol deserves to be read widely and freely; his humble witness to the simple art of reading may be this book’s most important gift. Libraries should have multiple copies.” — Library Journal Starred Review

“Going beyond the question of what poems mean, Sol investigates how they work — how they elicit emotion, provide or withhold information, and construct memorable images. His selections, largely derived from his time as a juror for the 2015 Griffin Poetry Prize, tend toward the relatively lesser-known, making this survey equally worthwhile for beginners who can learn from Sol’s instruction and for more seasoned readers who will delight in the new discoveries contained within.” — Publishers Weekly

“One wants to reread the poems, linger over Sol’s arguments … How a Poem Moves certainly revealed exciting new work to this reader of contemporary poetry, and it evinces the dizzying numbers and varieties of poems produced in North America today. We need more of this kind of thing, and Sol’s project might move more of us to make public our readings as much as poets make public their poems.” — Quill & Quire

“Sol is particularly sensitive to the value of the as-yet-undefined, since giving voice to the contradictory is poetry’s principal strength … But his greatest skill is in underlining the potency of aural effects: He is always on the lookout for alliteration, assonance and consonance, for hidden rhymes and barely-there metres … This is truly a welcoming book — at once an educational snapshot of the contemporary literary scene and a useful example of how to teach for educators themselves.” — Globe and Mail

“It provides a gateway for some of us to discover a new pleasure, and others of us to take a closer look at the poetry we love.” — Toronto Star

Other titles by Adam Sol