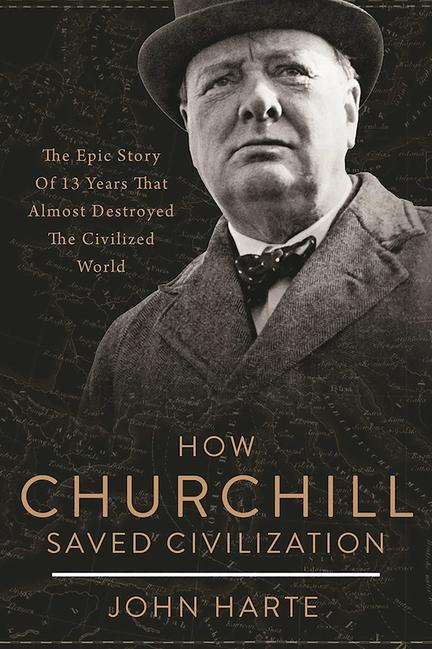 How Churchill Saved Civilization
resolves the lingering mysteries surrounding the causes of the Second World War, and what transpired during the war to bring its end result. It proposes answers to such questions as “Why were the Allies unprepared?”, “Why did France collapse so quickly?”, “Why didn’t the British government accept Hitler’s peace proposals?” and “Why did the Germans allow Hitler to obtain life and death control over them?”

But the book’s main purpose is to provide an account of Winston Churchill’s actions and their intended consequences — as well as some of the unintended ones — for readers who are unlikely to read a military history book of 800 pages. The author has pared down the details of this at once fascinating and frightening story to an accessible length of how the world nearly ended in the 1940s.
How Churchill Saved Civilization
was written in honor of all those who sacrificed their lives in the War, and to caution readers that it could very easily happen again, as key factors like complacency, ignorance, and weakness continue to play a role in international diplomacy.

Skyhorse Publishing, as well as our Arcade imprint, are proud to publish a broad range of books for readers interested in history--books about World War II, the Third Reich, Hitler and his henchmen, the JFK assassination, conspiracies, the American Civil War, the American Revolution, gladiators, Vikings, ancient Rome, medieval times, the old West, and much more. While not every title we publish becomes a New York Times bestseller or a national bestseller, we are committed to books on subjects that are sometimes overlooked and to authors whose work might not otherwise find a home.

John Harte was born in London, England after World War 1, when he absorbed the controversies and lessons of that war which historians puzzled over for years afterwards. He then watched each milestone leading to World War 2, in which he served, and lived in England throughout. In postwar years he became an investigative journalist in England and South Africa, where he visited the battle zones of the Boer War. He was a director of companies in the UK, South Africa, and Canada. This is Harte’s second book about Sir Winston Churchill, after How Churchill Saved Civilization (Skyhorse, 2017). He lives and writes books on modern history in Ottawa, Canada. Visit his website at johnhartebooks.com.

"Harte minces no words in presenting Churchill as the central figure and driving force in the West's resistance to Nazi Germany--resistance that was by no means a given. Harte describes Churchill as unique in being alert to danger, perceptive in analyzing it, and decisive in responding to it. Churchill's failures and shortcomings were penumbras of his ability and insight. Not, in the context of times times, was he a blinkered imperialist nor a destructive racist. Unabashed and unapologetic, this is a controversial and useful addition to the literature." -Dennis Showalter, PhD, author of Patton and Rommel , Hitler's Panthers, and Armor and Blood: The Battle of Kursk

Other titles by John Harte

How Gertrude Bell, St. John Philby, and Lawrence of Arabia Ignited the Arab Revolt - and How Saudi Arabia Was Founded

How He Helped Win the First World War