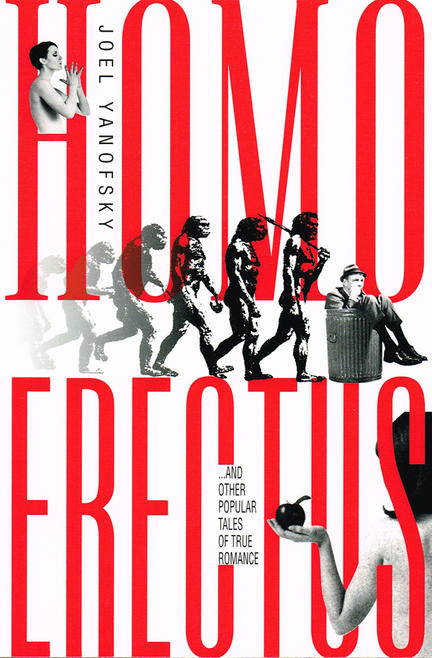 About one million years ago, when Homo Erectus decided to walk on two legs, he must have sensed that things would never be the same for him again - -that he could kiss his old ape habits goodbye. No more swinging from tree branch to tree branch, no more throwing his feces around. He would have also been the first to admit that he wasn't quite ready yet for martinis, smoking jackets and Masterpiece Theatre. A lot of men today find themselves in a similar position -- aware they can't go back to what they were and, at the same time, unable to figure out what they are supposed to become.

Women are trying to figure out the New Man too. And who better to ask than an insider, a man? Joel Yanofsky says, "When I was approached about writing a book about sex from a guy's point of view, I began to laugh. I don't mean giggle or chuckle either. I mean laugh uncontrollably, hysterically. Which is one of the reasons for writing this book: to figure out what the joke is and, better yet, who it is on. Women are more confusing than ever, not always a bad thing. So is knowing what it means to be a man, not always a bad thing either. I still don't know what it is I find so amusing. Except I'm still laughing. I can't promise answers, but I do have a few theories."

You'll be laughing too as you follow Yanofsky through the minefields of dating, mating, and breaking up in the nineties.

Joel Yanofsky has worked as a literary journalist, book reviewer and freelance writer since 1983. He has interviewed and profiled dozens of authors, from Margaret Atwood to John Updike. He has been a columnist for The Montreal Gazette, and his humour columns have appeared in MTL magazine, MENZ, Books in Canada and The Gazette. He's also written for The Village Voice, Chatelaine, Reader's Digest, TV Guide, The Globe and Mail and The Toronto Star. He has been nominated for two Quebec Magazine awards. His autobiographical novel Jacob's Ladder was published in 1997, his memoir Mordecai and Me in 2003, and his memoir Bad Animals in 2011.

Whenever I am confused or discouraged about what women want from me or what I want from them, whenever I feel love is a mystery I'll never be able to fathom and relationships are more trouble than they're worth, I count my blessings. At least, I keep telling myself, you're no honeybee.

Woody Allen once said that he was at two with nature; in my case, you can double that. I have lived my entire life in the suburbs, never very far, as it turns out, from a shopping mall. As a child, I refused to go to camp; as an adult, the idea of hiking in the woods or sleeping in a tent appalls me. All of which makes me an object of ridicule and scorn to friends who, despite living in the city, are constantly going on about the joys of nature. My reply is always the same: just try telling the plants, animals and insects who inhabit nature how wonderful it is. I'm not here to defend shopping malls, but there is one thing that can be said for them that can't be said for the wilderness: you can usually walk through The Gap without worrying about anyone trying to eat you.

The concept of the candlelight dinner doesn't exist in the wild either; date rape is de rigueur and dying for love is not just a romantic metaphor. For the male honeybee, even getting lucky has its pitfalls. It's not just that the bee's sex life is limited -- after all, everyone goes through dry spells -- it's tragically abrupt. To put it plainly, the male honeybee's genitals have been known to explode at the moment of climax, giving new meaning to the phrase "no-win situation."

The fate of the male Australian redback spider is better, but only slightly. His mate at least waits until after copulation to eat him, making the inevitable internal and eternal debate about whether or not to stay the night irrelevant.

But nature can be cruel in less obvious ways too. Take the peacock: all he has to do is show off his elaborate plumage to attract a female. Nothing to it, right? Well, leaving aside the fact that the plumage outweighs him and that it makes him an easy target for predators, there's also something fundamentally demeaning about having to preen and parade around like some sort of feathered Fabio just to get laid. It's no coincidence that the moment mating season is over the peacock sheds his plumage. At least until mating season begins again and again he forgets his pride and his common sense and is back making a spectacle of himself. Indeed, the bigger the spectacle the better.

All of this falls under the category of the things we do for love. Okay, you're no buzzing insect, no spineless invertebrate, no dumb bird or frog or chimp or salmon swimming upstream. You are a human being. You have free will. You are the only animal who can choose not to reproduce. None of which explains why you are willing to attend an Atom Egoyan film festival just because a woman you're attracted to thinks that Atom Egoyan is a cinematic genius.

I'm here to say he is no genius. Spend an evening staring at his oeuvre -- French for he laid another egg -- sometime and you'll realize just how undeniable and powerful the sex drive is. Like the praying mantis, your head is telling you: "You don't need this. Get the hell out of here. There's the EXIT sign. Why do you think it's lit up, for God's sake?" Meanwhile, your abdomen, so to speak, is telling you to stay put because when you're through with all this pretentious nonsense you can go back to her place and have sex.

If only it were that simple. Unlike most other species, human beings go out for cappuccino after the movies, which is when your date will ask you what you thought of a particularly annoying scene. If you're still thinking with your abdomen, you will stuff a croissant in your mouth and mumble something about how impressed you were with the filmmaker's stark, uncompromising vision. This is also about the time you will realize that when it comes to making an idiot of himself, the peacock has nothing on you.

That's the trouble with human beings: we think we're better than everyone else. "It's tempting to think of love as a progression, from ignorance toward the refined light of reason," Diane Ackerman says in A Natural History of Love, "but that would be a mistake." Ackerman's point is an important one and worth remembering. "The history of love is not a ladder we climb rung by rung," she says, "leaving previous rungs below. The way we love in the twentieth century is as much an accumulation of past sentiments as a response to modern life."

Still, I'm out most mornings now, trying to keep up with a woman who is in infinitely better shape than me, and there's only one thing on my mind: "Why am I doing this?" The simple explanation is that we just might share a shower when we get back to her apartment. The more complicated explanation is that somewhere in my distant past there must have been an ancestor of mine with a bigger skull and a slightly smaller brain but with similarly short legs and similarly insufficient stamina, chasing after a potential mate, thinking, "Just wait till we get back to the cave."

In the meantime, I'm sweating and panting. My achilles tendon feels like it's about to snap. My back aches. I have a stitch in my side. I have to pee. Dogs are barking at me. Children are staring. That's when something buzzes past my ear and I realize what I probably should have realized a long time ago: the only significant difference between me and that honeybee is that I can't fly.

Joel Yanofsky is a funny guy... Homo Erectus is a humorous, poignant, honest look at what it's like to be an end-of-millennium kind of guy, stuck in the transition from cave man to New Man. If Yanofsky is right, the battle of the sexes is over. We lose. This book will make men feel that someone understands them. It will also make women glad that they are not men.

Other titles by Joel Yanofsky

To Make a Difference

A Prescription for a Good Life

A Father's Accidental Education In Autism