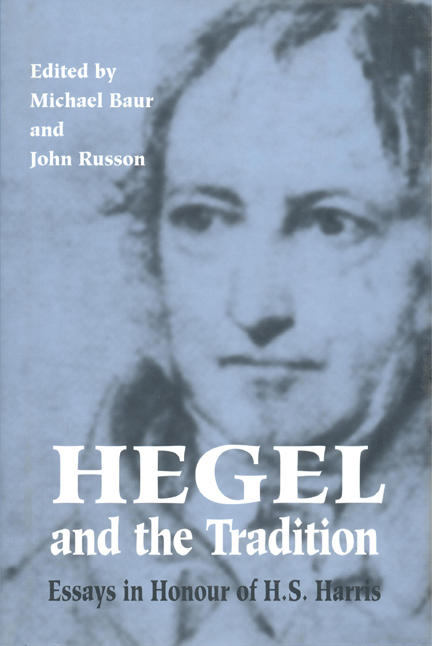 Georg Wilhelm Friedrich Hegel (1770-1831) is considered a philosopher of the Tradition, both in the sense that his work is rooted in the political, artistic, religious, and philosophical traditions of European culture and in the sense that he takes up the notion of tradition as an object of philosophical investigation. This collection examines Hegel's philosophy as it bears on the meaning and relevance of tradition – historical, legal, aesthetic, religious, and philosophical. The thirteen original essays draw upon and celebrate the work of H.S. Harris, who is considered by many to be the most influential interpreter of Hegel in the English-speaking world.

The collection as a whole examines Hegel's rich and nuanced relation to his own traditions, including his creative reworking of the legacies of Greece, Rome, Christianity, the Middle Ages, early modernity, and his immediate predecessors. It also shows how Hegel's thought has direct relevance for us today as we seek to understand ourselves in relation to our inherited traditions. The volume concludes with an afterword by H.S. Harris and a comprehensive bibliography of Harris's published works.

This important anthology represents the first rigorous and systematic effort to apply Harris's seminal and innovative style of Hegel scholarship to a wide variety of philosophical and historical issues. It functions both as a study of Hegel's philosophy and as a commentary on Harris's vast contribution to Hegel scholarship.

Michael Baur is an assistant professor of philosophy at the Catholic University of America.

John Russon is a professor in the Department of Philosophy at the University of Guelph.

Other titles by John Russon

Democracy and Opinion in Plato's Republic

Art, Politics, and the Nature of Experience

Perception and its Development in Merleau-Ponty's Phenomenology

Force and Truth in Politics

The Self and its Body in Hegel's Phenomenology of Spirit