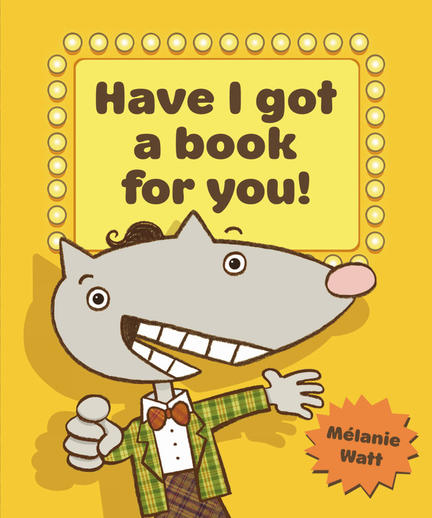 The bestselling author-illustrator and creator of publishing sensation Scaredy Squirrel presents a character you just can't say “no” to: salesman Mr. Al Foxword. Al can sell anything. You can't help but be impressed by his lineup of satisfied customers: he's sold an icebox to a penguin, an umbrella to a fish and a dirt vacuum to a mole. Al knows you're looking for a great book, and this is your lucky day. Say goodbye to books that leave you bored and uninspired. Research shows that 100 percent of Al's customers notice a dramatic increase in happiness after buying his book. Not totally convinced yet? Just when you think you're ready to close the book on this relentless salesman, he comes up with a clever tactic that you simply can't refuse.

The retro design and the sheer absurdity of Foxword's powers of persuasion make for an off-the-wall picture book with major crossover appeal that pokes fun at our hard-sell society.

... a self-reflexive and broadly comic parody of self-promotion that invites its young readers to become critical consumers of advertising.

Driven by a particularly artful use of page turns, this makes compelling reading. Have your credit card ready.

Jokes and interactive fun are the point here ... Give this to Mo Willems' legions of Pigeon fans.

Have I Got a Book for You!

You can call him Al! Mr. Al Foxword is a smooth-talking, slick, persuasive salesman. He uses all of the corny tricks of the retail trade to get you to purchase this book. As you are poised to turn its last page, he brings out a clever tactic readers simply can’t refuse. This title is also available in French as J’ai tout un livre pour toi!

Other titles by Melanie Watt